Yokosuka mayor thanks Marines, sailors for help after deadly crash 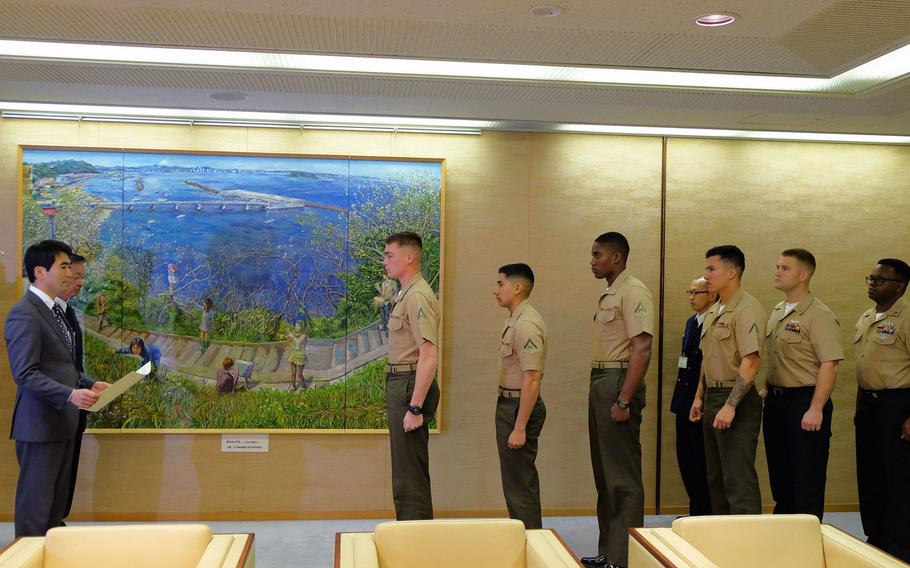 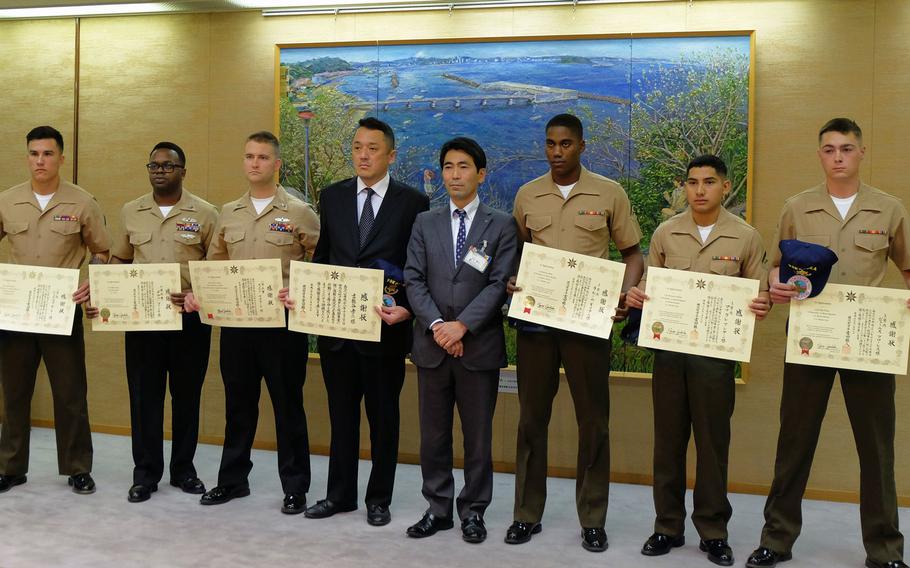 Buy Photo
Yokosuka Mayor Yuto Yoshida poses for a photo with six servicemembers and one Japanese local who were recognized Jan. 16, 2017 for providing assistance to the victims of a deadly car crash Dec. 31, 2016. (Tyler Hlavac/Stars and Stripes) 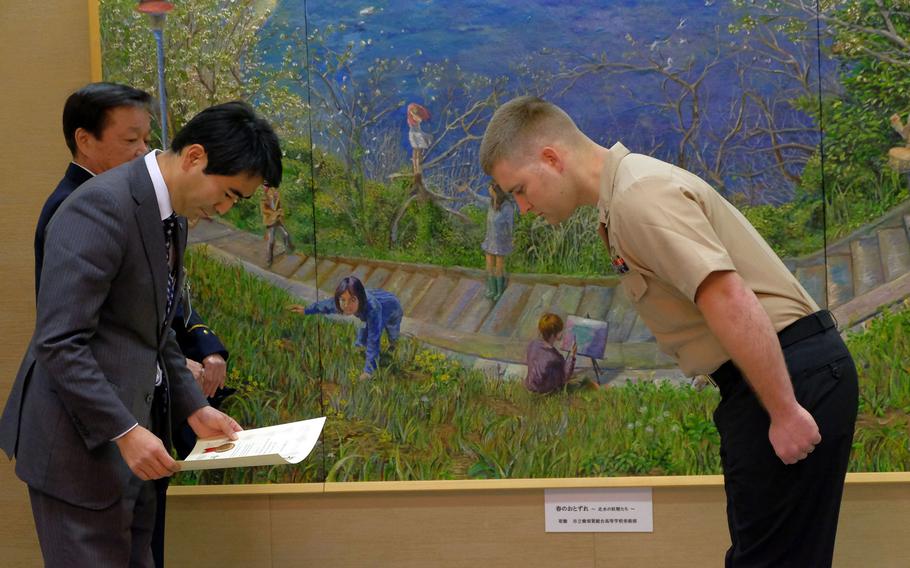 Buy Photo
Petty Officer 1st Class Garrett Osborne bows are receiving a certificate expressing the appreciation of the Yokosuka community Jan. 16, 2017. Osborne was one of a group of six service members who provided assistance to the victims of a deadly car crash Dec. 31, 2016. (Tyler Hlavac/Stars and Stripes)

YOKOSUKA NAVAL BASE, Japan — The city of Yokosuka honored servicemembers Monday for their rapid rescue efforts after a car plunged five stories from atop a parking garage with five people inside.

Yokosuka Mayor Yuto Yoshida presented the four Marines and two sailors with certificates expressing the appreciation of the community.

Yoshida said he was impressed by their fast response and that their actions helped Japanese medical responders. Three adults died when the vehicle land upside-down, but two boys were pulled out alive.

“Because of everyone’s quick rescuing efforts, emergency officials were able finish their on-site response quickly and take [the boys] to the hospital immediately,” Yoshida said. “I’m thankful to hear that you rescued [the boys] as members of the community even though it is not in your home country and a place where you were assigned.”

Yokosuka base commander Capt. Jeffrey J. Kim told Yoshida that it was a natural for the servicemembers to want to help.

“We have sailors and visiting Marines who instantly acted as if this was their home community,” Kim said.

The vehicle accidentally backed over a parking stone Dec. 31 at the Saikaya parking garage, just off Route 16.

Petty Officer 1st Class Garrett Osborne was walking with his wife, Alisha, and their 4-year-old son and 1-year-old daughter when he heard a loud crash that sounded like construction.

“Out of the corner of my eye I see this big object coming out of a building, and sure enough, it’s an SUV flying out backward from this parking garage,” said Osborne, assigned to the Navy Munitions Command. “At this point, it’s all going in slow motion, and I don’t believe my eyes. It’s almost something you see in a movie.”

Osborne said he ran toward the car and began yelling for help. He was joined by Petty Officer 2nd Class Derhon Finch from the Yokosuka-based USS McCampbell as well as Marine lance corporals James Flores, Raheem Gillim and Manaure Arellano and PFC Jacob Boerner; who attempted to rescue the victims.

The Marines, from the Camp Pendleton-based 3rd Battalion, 1st Marine Regiment, are forward deployed with their unit to Okinawa for a six-month rotation. They were on leave and traveling to Tokyo to celebrate the New Year’s holiday.

The servicemembers and a group of Japanese citizens first tried to rescue the boys, ages 11 and 16, who were pinned in the car. They were able to extricate the younger boy but the older youth remained trapped. The servicemembers tried unsuccessfully to remove the vehicle’s doors with their hands and a crowbar. The group then flipped the car over, freeing the remaining victim. The service members stayed at the accident site until Japanese emergency workers arrived.

Kazuhiko Kagejima, 56; wife Akiko, 46; and, her mother Hiroko, 81, died. Yokosuka officials said the boys are still in the hospital. Their condition was not released.

“I didn’t really think anything, I just felt I needed to do something,” Flores said. “I didn’t want to just stand there and watch. Something needed to be done, so I did what I needed to do.”

The Marines earlier were awarded Navy and Marine Corps Achievement Medals for their actions.

Stars and Stripes reporters Erik Slavin and Hana Kusumoto contributed to this report.