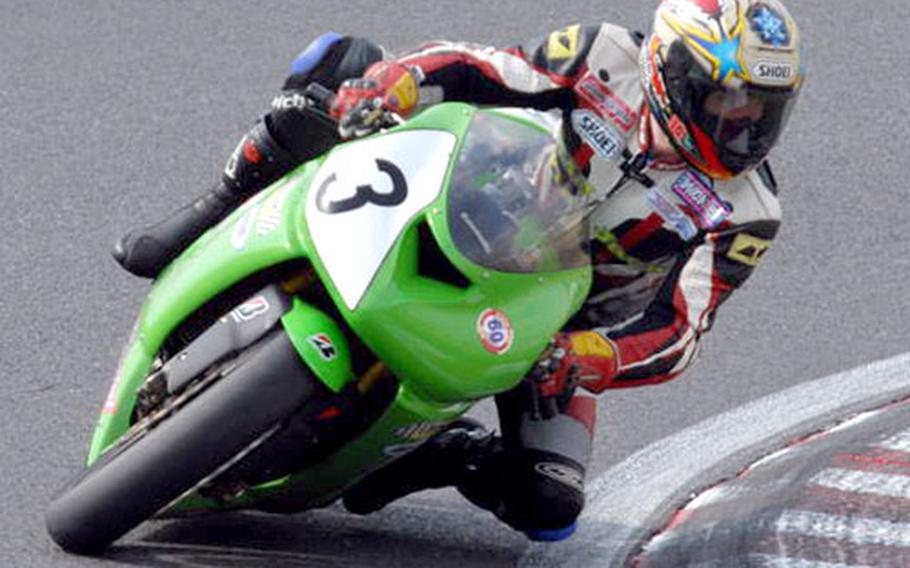 Yokosuka civilian Craig Fajardin takes a high-speed turn at the Tsukuba racetrack last month in his first official race. At 39 years old, Fajardin decided to race in order to "look his kids in the eye," he said. (Photo Courtesy of Sara Shokuta / Racing Together)

Yokosuka civilian Craig Fajardin takes a high-speed turn at the Tsukuba racetrack last month in his first official race. At 39 years old, Fajardin decided to race in order to "look his kids in the eye," he said. (Photo Courtesy of Sara Shokuta / Racing Together) 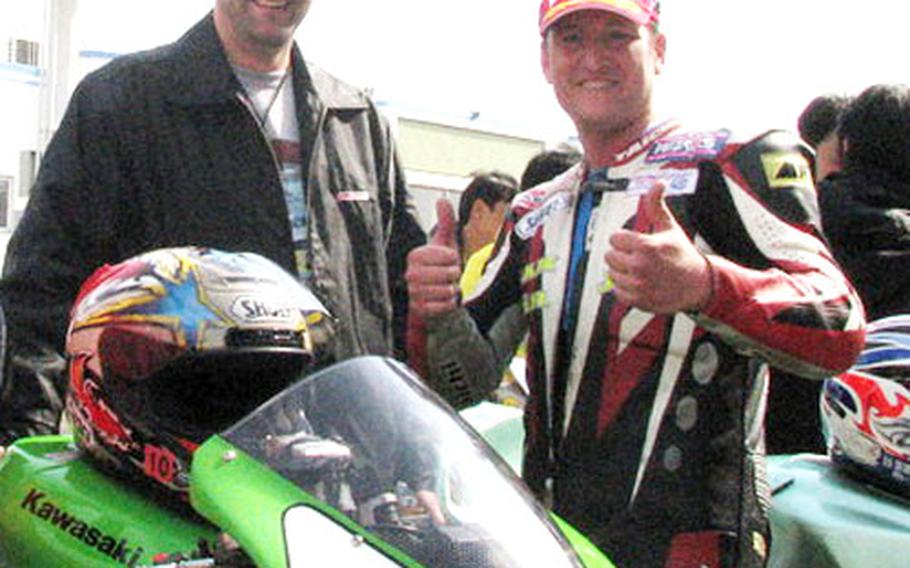 YOKOSUKA NAVAL BASE, Japan &#8212; Starting to race motorcycles at 39 years old is not a sign of a mid-life crisis for Craig Fajardin.

But just recently, Fajardin, director of the Yokosuka detachment of the Tactical Training Group, Pacific, decided to &#8220;stop making excuses&#8221; and hit the circuit at Tokyo&#8217;s famed Tsukuba racetrack on his 600-cc Kawasaki ZX6RR.

He did it to look his two children in the eye, Fajardin said. Although he&#8217;d played on racetracks routinely for years, he never took the next step. Then he was &#8220;noticed&#8221; on an open-track day at Tsukuba by Team Winjack. They asked Fajardin if he wanted to race his bike.

So Fajardin walked. He trained. He worked out.

And he studied and practiced at Tsukuba &#8212; a circuit near Tokyo known for its technical difficulty and many curves.

Fajardin placed first in the qualifying round in his first race on March 10 with a 103.7-second lap time. This put him in pole position for the race, where he finished in second place.

A race clip on youtube.com shows Fajardin taking curves at nearly 270 kilometers an hour, about 160 miles per hour.

His new goal is to place in the top ten professionally. He is only three-tenths of a second shy of qualifying for the professional circuit, he said.

But most important is the effect the racing is having on him and his family, he said. He has already seen a difference in his children&#8217;s&#8217; achievements, and his wife, Orie, has become the manager of the Winjack pit crew.

For his part, he always goes faster when Orie is there and feels strongly supported by his children, he said. &#8220;Now I just have to keep the life insurance up to date.&#8221;

Fajardin&#8217;s next race is April 8 at Tsukuba hosted by the Motorcycle Racing Federation of Japan.