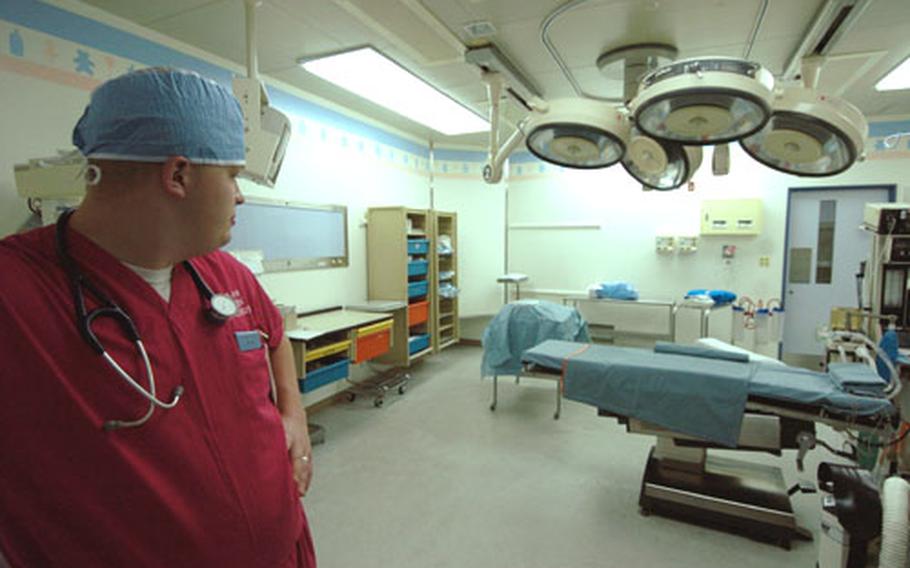 YOKOSUKA NAVAL BASE, Japan &#8212; The smiling faces in hot-pink scrubs are a welcome sight for a newborn baby, while the wealth of new technology and renovations will please the new mom and dad.

U.S. Naval Hospital Yokosuka, the place of birth for hundreds of new babies each year, recently made improvements to its obstetrics ward.

The ward already had bright, pleasing d&#233;cor and sophisticated security &#8212; some of the best in the hospital &#8212; to prevent baby thefts.

This summer, the hospital added a new nurse&#8217;s station and front desk and renovated the nursery, she said. The renovations include new computers throughout the ward so nurses can compile their notes where they&#8217;re working, including the nursery.

The computerization helps the staff stay organized, she added: &#8220;It gives corpsmen and doctors more access to new information and they&#8217;re able to communicate better.&#8221;

Patients arriving in the ward follow a linear progression, from exam room to delivery to eight postpartum rooms, each decorated differently and outfitted with a foldout chair that allows dads a place to sleep.

There is a breastfeeding room with an electric pump where moms can view instructional videos or simply have a quiet place to nurse.

&#8220;Even if they&#8217;re already discharged, they can come back,&#8221; said obstetrics ward corpsman Hospitalman Gary Darr, giving moms a place to nurse if they return for a medical appointment.

The hospital next will add new labor beds with special features such as a grip bar and detachable components that can help in a delivery. The delivery rooms also are scheduled to get new furniture and monitors. Other equipment, such as ventilators, has been or will be upgraded in the next few months.

There is no neonatal intensive care unit at the hospital, so risky pregnancies usually are handled elsewhere.

But the ward is capable of handling emergencies by stabilizing a baby and rushing it to a Japanese hospital. In the two years Darr has been in the ward, that has never happened, he said.

For a small population, when compared to a town in the States, Yokosuka and other bases in Japan provide the ward with plenty of business. In March, for example, they had 76 deliveries.

It can get busy, Woodcock said: &#8220;We&#8217;ve had times when all three labor rooms were going&#8221; while a Caesarian section was under way in one of two operating rooms.

And unlike obstetrics wards in the States, Yokosuka&#8217;s baby booms are fairly predictable since many of the new dads are assigned to ships. That means the ward&#8217;s supplies, leave and personnel moves must be scheduled accordingly.