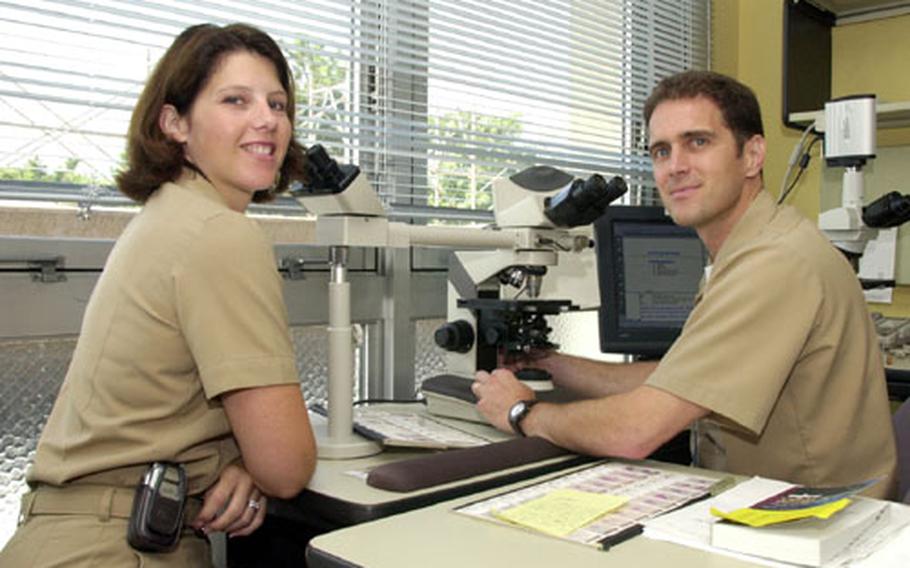 Lt. Cmdr. Lori Rogers and Lt. Cmdr. David Burch, both physicians at U.S. Naval Hospital Yokosuka, arrived recently and will head up the Tumor Registry Clinic at the hospital on Yokosuka Naval Base. (Jim Schulz / S&S)

YOKOSUKA NAVAL BASE, Japan &#8212; Acture, a tumor registry system, has been around for decades but is just as valuable as the latest high-tech medical systems.

Physicians at Yokosuka Naval Hospital use the national database and supply it with specific data about individual patients, the type of cancer they have and how it has been treated, said Lt. Cmdr. Brian Schnell, director of the program there.

&#8220;This is especially valuable for people in the military,&#8221; he said. Such people transfer often, and seeing a series of doctors for a few years each is not uncommon. With the registry, Schnell said, doctors at the patient&#8217;s next duty station can access particular information about his or her tumors &#8220;and what kind of treatment has been used,&#8221; he said.

Typically seen among Yokosuka patients are melanoma or skin cancers, testicular tumors and reproductive-system tumors in women, the doctor said.

Although individual patient information is stored in the computerized registry, &#8220;this is privileged information that is protected, just like your medical records. It&#8217;s not just free-floating out there,&#8221; Schnell said.

Almost all hospitals except those that are very small participate, he added.

&#8220;In every participating hospital, you take information that&#8217;s relevant to the patient and add it to the databank. Basically, you have fields that you fill in with identifying information,&#8221; he said.

&#8220;You indicate the characteristics of the malignancy, what organ it was located in, what the pathologist had to say about it, how far it had progressed, were any additional operations required and did it spread to lymph nodes.&#8221;

Acture helps compare cancers because every tumor behaves differently depending on size and location. Doctors use the program to view and develop statistics on which medicines work and how people, as well as tumors, respond to those medicines.

He said Acture, which does not store information on benign tumors, most definitely contributes to saving lives.

&#8220;It has certainly contributed; as well, it is providing valuable information for those involved in cancer research,&#8221; he said. Over time, researchers begin to see how particular cancers respond to specific treatments in general.

Schnell said his assistant, Kanako Shino, most deserves kudos for maintaining the system in Yokosuka.

&#8220;All information on patients is collected using pharmacy, radiology, inpatient and outpatient records,&#8221; explained Shino, a Japanese master labor contractor specially trained to use the system.

After reviewing records, she answers database questions to identify the type of tumor.