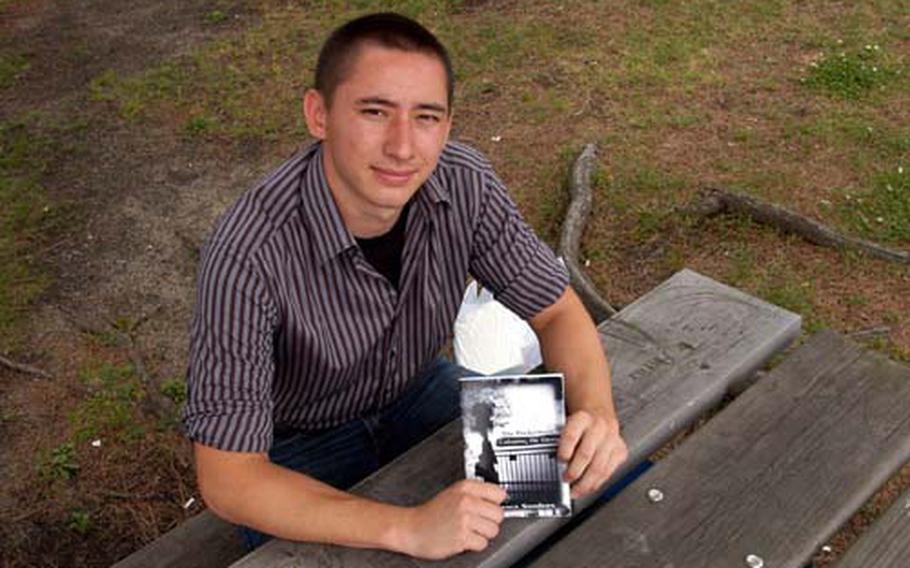 Terence Sanders displays a proof copy of his new book, “The Pocketbook: Coloring the Gray,” while visiting Yokosuka Naval Base, Japan, on Tuesday. Sanders, a first-year student at Tulane University, based some of the personality traits of his characters on people he met as a student at Kinnick High School. (Erik Slavin / S&S)

Terence Sanders displays a proof copy of his new book, “The Pocketbook: Coloring the Gray,” while visiting Yokosuka Naval Base, Japan, on Tuesday. Sanders, a first-year student at Tulane University, based some of the personality traits of his characters on people he met as a student at Kinnick High School. (Erik Slavin / S&S) 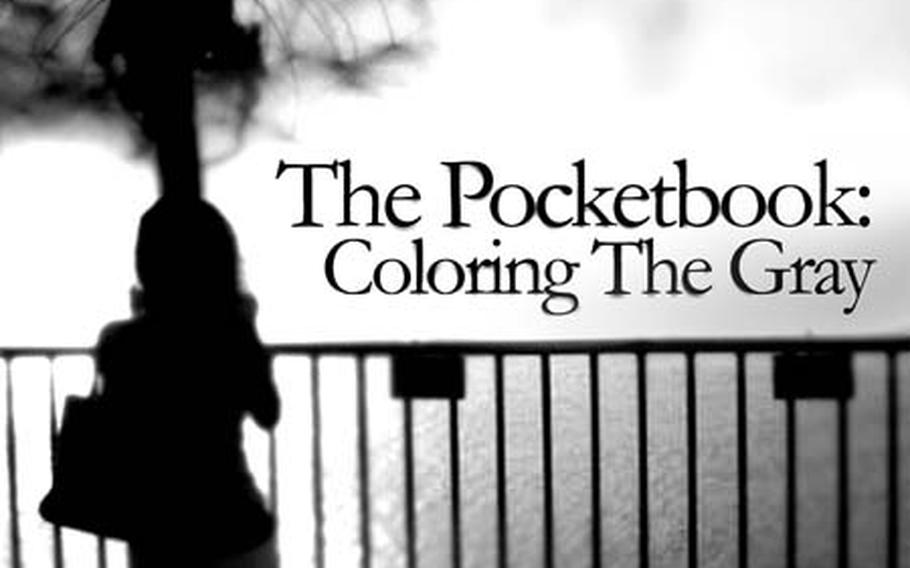 YOKOSUKA NAVAL BASE, Japan &#8212; If there is a common theme among the short stories within "The Pocketbook: Coloring the Gray," it revolves around clashing personalities.

Some of the characters are personifications of altruism and evil. The interactions they have with people whose consciences exist in grayer areas produce a wide range of angst, desire, love and regret.

Terence Sanders, 18, the book&#8217;s author, returned for a visit last week to Yokosuka, where as a junior at Nile C. Kinnick High School he wrote many of the stories included in the proof edition.

The book is to be published later this year and will be available on Amazon.com.

Many of his characters&#8217; personality traits came from Sanders&#8217; experiences living on military bases.

The transient nature of the community instilled a desire within Sanders to get to know people quickly and deeply in the short time before they inevitably parted.

"Nobody goes into high school expecting to graduate with their friends," Sanders said. "So you pick the best people and get to know them the best you can."

That sense of urgency led Sanders to write as much as he could before leaving for California during his senior year.

He began by writing two plays for a high school drama ensemble. The students who watched the performances related to his work, which he said encouraged him to do more.

He founded the extracurricular group Writers Underground in 2006.

"Writers are generally shy, especially in high school," Sanders said. "We created an environment where they could share their writing without disapproval."

Albie Clemmer, a former teacher at Kinnick and the sponsor for the writing group, said other writers looked up to Sanders out of respect for his writing.

Though Clemmer never taught Sanders in a class, she recalls mornings where he would hand her new short stories to read. She gave him feedback and helped fine-tune the writing.

"It shows there really is no limitation to age because at his age, his fluency with the language &#8212; it just flows so beautifully from him," Clemmer said. "The stories, the ideas, the images, they&#8217;re coming from a deeper place."

While attending Orange Glen High School during his senior year in Escondido, Calif., Sanders&#8217; writing caught the attention of a student whose mother was starting up a publishing house.

Sanders was initially wary of signing on with a publishing company called Happy Scribbles. Several of his stories explore dark themes found nowhere in the company&#8217;s other books.

But the publishers said they found Sanders&#8217; writing interesting, so he agreed and embarked on a grueling editing process.

Sanders explores several writing techniques, ranging from stream of consciousness to more traditional structures. His writing is often heavy on metaphor, which Clemmer believes is one of Sanders&#8217; strengths.

One story, "Monster," is about a constable holding a serial killer in prison. As they interact, the constable reveals his guilt over killing another person.

Sanders will have a book release in New Orleans, where he is a first-year student at Tulane. He&#8217;ll have updates about the book at his Web site, www.terence sanders.com.

While many writers dream of finishing a book but save it for another day, knowing that he&#8217;ll be putting on an ensign&#8217;s rank in three years gave Sanders all the more reason to finish up while he is young.

"Once I get into the service, there will be other important things in my life," Sanders said.