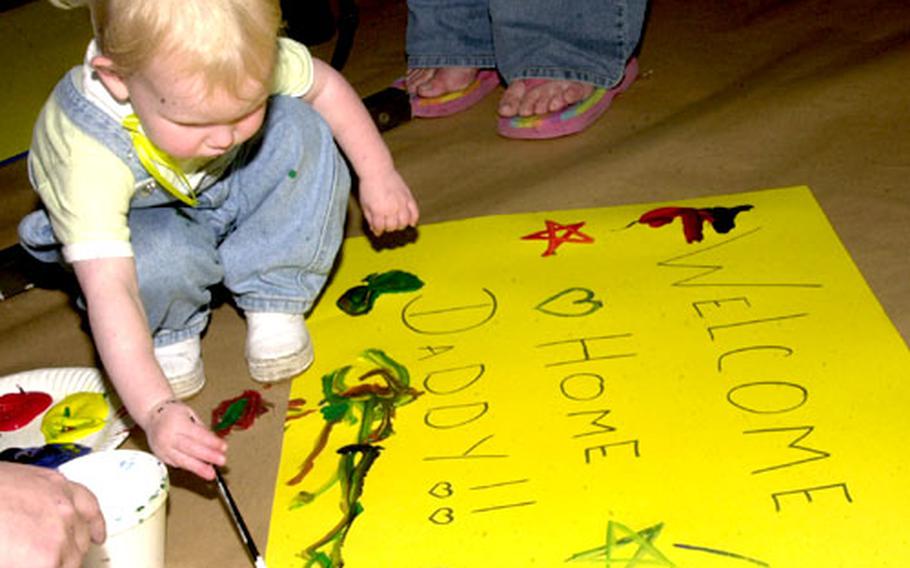 YOKOSUKA NAVAL BASE, Japan &#8212; This is a base on the edge of its collective seat.

With the Navy confirming that the USS Kitty Hawk and two of its escorts are expected home early next week, the place is ready to burst.

Excited families are planning reunions and vacations; Navy officials are planning the &#8220;mother of all homecoming parties&#8221;; and local merchants are ready for a fleet of sailors with wallets fattened by the lack of any port calls during the four-month cruise.

Everyone, including base officials, is getting ready for the return of some 6,000 sailors.

&#8220;Basically, we are already set up supplywise with everything we need,&#8221; said Mike Chase, Yokosuka base spokesman. &#8220;Remember that we are a forward-deployed operating base, and that it&#8217;s not like we haven&#8217;t hosted other ships here while the three ships returning now were gone.&#8221;

Nevertheless, some base residents are getting ready for the other inevitable results of the homecoming: traffic jams getting on and off base; empty shelves at the exchange and commissary; long lines at banks, eateries and administrative offices.

Families and friends aren&#8217;t the only ones who will be excited to see the big gray ship pull up to its pier.

According to estimates by U.S. Naval Forces Japan, the Kitty Hawk brings about 8.8 billion yen per year, or around $67 million, to the local economy. Of course, the carrier has to be in its home port for most of that money to be spent.

A good portion of those funds goes directly to Japanese workers and companies.

Ship Repair Facility workers, almost all of whom are Japanese nationals, earn a collective $3 million each year. The Navy spends about $15 million annually on Japanese contractors; it also spends around $8 million per year on locally produced &#8220;material to support the carrier&#8217;s upkeep.&#8221;

When the ship is in port, between 100 and 300 extra technical experts, military advisers and civilian teams are brought in from the States. Navy officials estimate that with hotel rooms, taxis, shopping and dining, those extra hands spend a total of $30,000 per day in Yokosuka.

All of the $2 million in produce and other perishables purchased while the Kitty Hawk is in port is bought from local merchants, Navy officials said. Kitty Hawk sailors and their families pay about $7 million per year in rent for off-base housing.

And none of these figures takes into account the amount of money that Kitty Hawk sailors spend on local food, clothing, groceries and entertainment. U.S. Naval Forces Japan had no estimates on those figures, but bar owners outside the gate know their business is about to pick up.

&#8220;Many of our customers are foreigners and Navy-related personnel. It is a difficult time,&#8221; when the ships are away, said Kayoko Kuroda, owner of The Morrigan&#8217;s, a popular pub outside Yokosuka&#8217;s front gate.

Business has been down 30 percent to 40 percent compared with days when the ships are in port, she said. For some businesses, the hit is even harder.

&#8220;As many as 80 percent of our customers are foreigners,&#8221; said Kazuyoshi Kumai, manager of the Capricciosa Italian restaurant in a nearby shopping mall.

Of course, just like the families and the sailors, most local businesses that rely on American customers realize it&#8217;s a never-ending cycle.