Sailors from the USS John S. McCain train at putting out a Class Bravo Fire in the Engine Room at the Afloat Training Group Firefighting School in Yokosuka, Japan. (Jim Schulz / S&S)

Sailors from the USS John S. McCain train at putting out a Class Bravo Fire in the Engine Room at the Afloat Training Group Firefighting School in Yokosuka, Japan. (Jim Schulz / S&S) 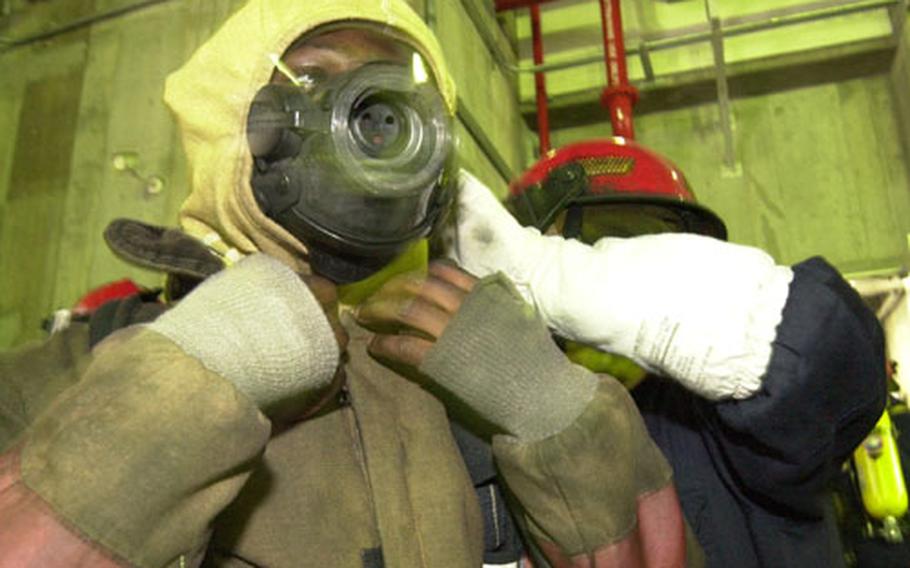 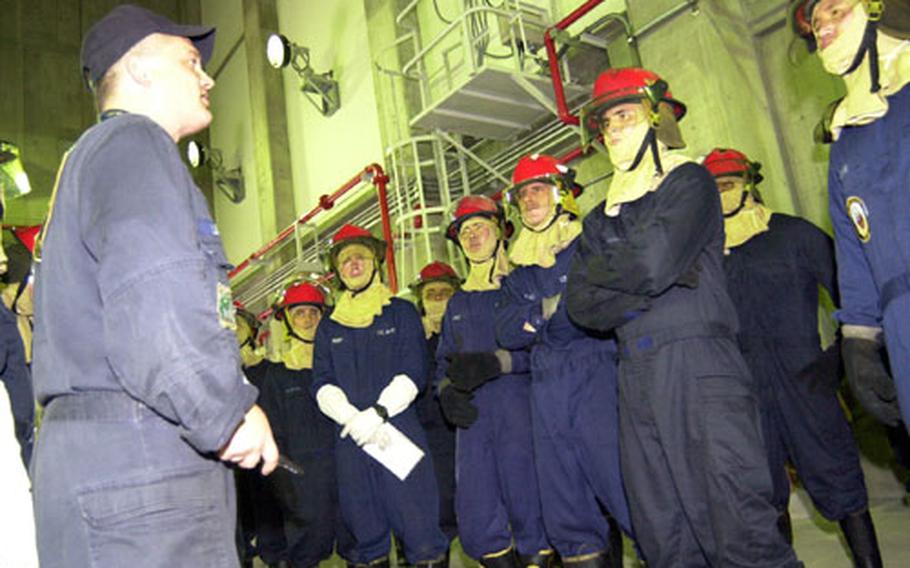 Sailors of the USS John S. McCain get a safety briefing from the Afloat Training Group firefighting trainer. The USS McCain is the first class to train at the new firefighting school in Yokosuka, Japan. (Jim Schulz / S&S)

YOKOSUKA NAVAL BASE, Japan &#8212; The Navy&#8217;s newest high-tech firefighting and damage control training center roared to life Monday as the first class fought fires and floods in a daylong session.

Then they battled flooding as they patched and pumped out the flooding room.

The new center is leagues of improvement over the previous open-air training center, sailors who have trained in both said.

&#8220;This one is actually set up right, just like you would find on the ship,&#8221; Petty Officer 2nd Class Brendan Thibideau said.

The commander of the Afloat Training Group, Western Pacific, which runs the training center, was on hand Monday to officially open the facility and observe the first class.

&#8220;This is a state-of-the-art facility and a dramatic improvement from what was next door,&#8221; Capt. David Bigelow said.

&#8220;The other building was 50 years old, and while we were able to use it as a certified training center, it was showing its age. This new facility is a big step forward.&#8221;

Bigelow said simulations are now computer-controlled, and all training fires can be halted with the flip of a switch.

The new training center provides both hands-on training by instructors in training rooms and oversight by technicians in a centralized control booth.

But the biggest improvement for training are the new facility&#8217;s environmental controls, officials said.

The old training center was an open-air building: Thick, black smoke belched from the complex each time training was conducted.

The new facility is enclosed in an enormous building containing recycling systems for air, water and smoke.

In the new building, smoke is collected, processed and released. And all of the water is captured, cleaned and re-used.

Particulates removed from the air are collected and processed into bricks, which are used in road construction, Bigelow said.

From 2,500 to 4,000 Pacific theater sailors will train in the new facility each year, officials say.

As the engineering spaces were readied for the first fire-fighting team, flames jumped from 10 feet to 15 feet.

&#8220;That&#8217;s only at 40 percent,&#8221; Senior Chief Petty Officer Kenny Berryman, an Afloat Training Group trainer, said as he showed the facility to a Yokosuka base fire department official.