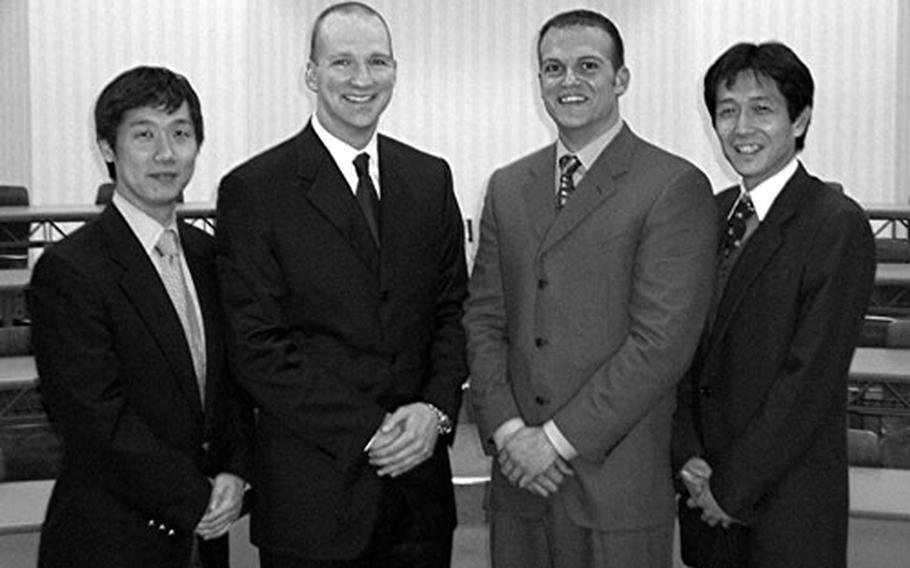 YOKOSUKA NAVAL BASE, Japan &#8212; Navy doctors Andrew Schiemel and Paul Hladon, both lieutenant commanders, say they&#8217;ve learned much about Japan&#8217;s approach to medicine while working at Naval Hospital Yokosuka the past few years.

That experience has helped them write a book illustrating differences between Japanese and Western medical thought.

In April, the doctors and two translators &#8212; Masayuki Yoshida and Tomohiro Morio, both also doctors &#8212; published &#8220;The Language and Philosophy of Western Medicine,&#8221; about Western approaches to medicine, written specifically for Japanese readers.

He said it&#8217;s the first textbook written in both Japanese and English to explain how Western doctors think. It&#8217;s designed for Japanese medical students who plan to study in the West or who want to learn more about Western medical practices for their own interest or to attend international conferences.

Students can use the English translation to develop their language skills or stick with the Japanese.

The book was conceived as a text for a class about Western medicine that the doctors began teaching a few years ago at Tokyo Medical and Dental University.

They were asked to create a class that would teach medical English but said since most medical terms are in Latin and Greek, they realized students needed to learn less about language and more about approach and philosophy.

In Japan, Schiemel said, doctors use more tests to make diagnoses. In the West, including the United States, doctors use patient interviews, history and examinations.

But the methods used in Japan, because they involve more testing, can be more expensive. Rising medical costs slowly are pressuring the system; doctors in Japan may need to adopt some Western approaches to control costs, Schiemel indicated.

As they were forming their idea, they met someone from one of Japan&#8217;s largest medical publishing houses, who&#8217;d seen a similar need.

The book is a text for their class, accompanied by a separate case studies workbook. But for those not in the class, it can serve as a primer. &#8220;Students can refine their skills right here using a textbook,&#8221; Schiemel said.

The book took about a year of planning and five months of writing. And before they undertook the project, the doctors said, they had to learn about their readers through the students they taught at the university or interns they worked with at Yokosuka&#8217;s hospital.

The book hit bookstores two months ago and has sold 800 copies so far.

The doctors admit they&#8217;re proud to be published authors, especially since they&#8217;ve been out of residency for a decade or less. Young doctors usually don&#8217;t have books published, Schiemel said.

Both doctors are to transfer from Japan this year; they say leaving behind an important tool for future medical education is gratifying.