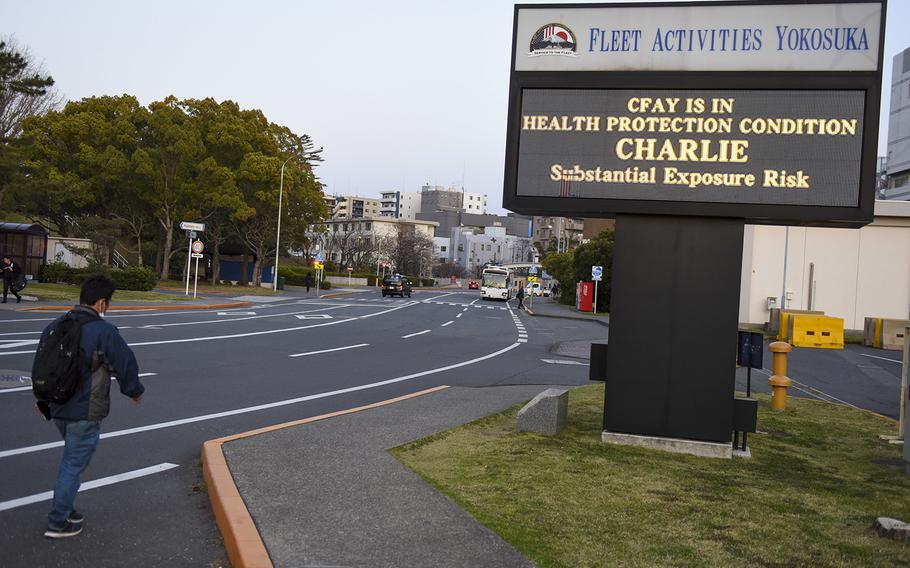 YOKOSUKA NAVAL BASE, Japan – Those stationed at the home of the 7th Fleet can expect the installation to enter Health Protection Condition-Charlie by Monday after six people tested positive for the coronavirus, the base announced Sunday afternoon.

Yokosuka now has 14 active infections, according to a post on the base’s official Facebook page. Most of those patients had recently arrived in Japan from other countries.

However, the half-dozen patients reported Sunday caught the virus either in the local area or from base contacts, the post said. More than 100 people are now in quarantine after having close contact with those six individuals.

Yokosuka commander Capt. Rich Jarrett responded Sunday by ordering additional restrictions that are effective immediately, according to the message. Service members, civilian employees, contractors and families attached to the base must now stay within 1.86 miles from their homes or the base and are banned from dining inside restaurants, going to beaches, staying in off-base hotels for liberty purposes and going to barbers or salons.

Several base services, including movie theaters, bowling centers, barber and beauty shops, dine-in options, fitness centers and indoor chapel services were suspended Friday and will remain closed until further notice, according to the post.

“These immediate actions are reasonably necessary given the rapidly accelerating risk vectors we are seeing in the local community,” Jarrett said in the message.

“I expect that these measures will remain in place for at least two weeks, and we’ll continue to assess the risks based upon the trends for COVID-19 case generation,” he added, referring to the name of the respiratory disease caused by the coronavirus.

Yokosuka also expects to upgrade to HPCON-Charlie, which signals there is a “substantial” risk of catching the virus on the installation – within the next 24 hours, according to the message posted about 4 p.m. Sunday. The base had been under condition Bravo, which indicates a moderate risk, since June.

“Everyone in the (base) community needs to limit their close contacts, maintain their close-contact logs, continue the proper use of face masks, remain socially distant, wash their hands frequently and practice personal and workplace hygiene,” the post added.

Also on Sunday, the Tokyo Metropolitan Government announced 331 new cases, according to the Japan Times. That brings the city’s total number of active coronavirus cases to 15,867.

Okinawa confirmed a record one-day high of 159 cases on Sunday, according to local news reports. Over the weekend, the Marine Corps on Okinawa announced 10 new infections associated with a pair of clusters that occurred after the Fourth of July weekend.