Yokosuka digs into its past for future plan 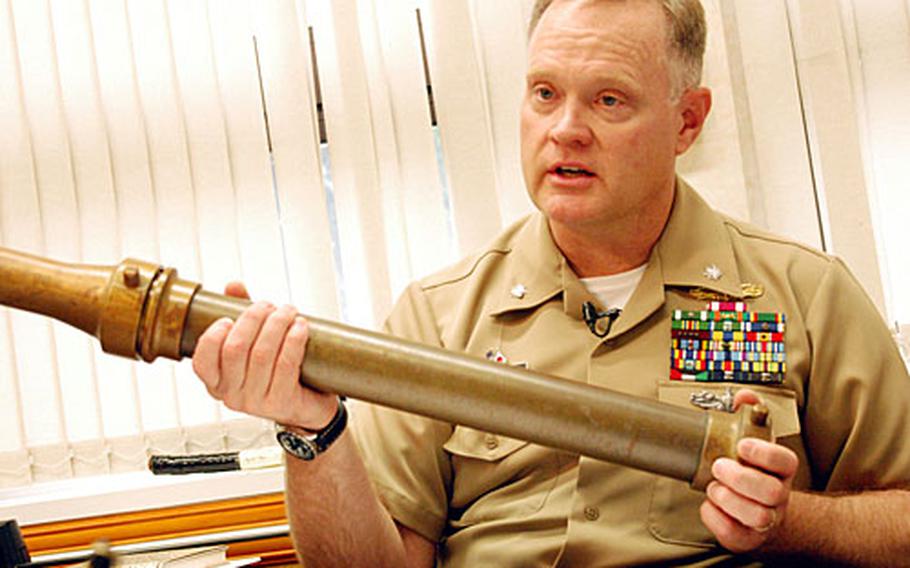 Yokosuka base chief staff officer Cmdr. Jon Lundquist is helping to organize a museum and is looking to find more historical artifacts like this fire hose. (Allison Batdorff / S&S)

YOKOSUKA NAVAL BASE, Japan &#8212; Those who live and work at Yokosuka Naval Base may have heard of the Great Kanto Plain Earthquake of 1923, but they may not realize they pass by the memorial every day at the base&#8217;s main gate.

They might not know that 124 shipyard workers on base died in the quake, that 1,000 people perished in Yokosuka or that the harbor around Azuma Island burned for three days, said Yokosuka&#8217;s Chief Staff Officer Cmdr. Jon Lundquist.

The quake is just one story from the reams of Yokosuka base history, Lundquist said. Many more remain unknown to the majority of the people who live and work here, he said.

To remedy this, base leaders are organizing historical tours this fall of some of the 112 historic sites on local U.S. military property, and they plan to open a museum by year&#8217;s end, Lundquist said.

But the base needs the community&#8217;s help in collecting artifacts, Lundquist said Tuesday, and they&#8217;re not picky.

Photographs of the base from any period &#8212; from its beginnings as an idea in the 1860s onward &#8212; also are appreciated, Lundquist said. The photographs will be copied and returned with credit given to the donor, he added.

No site for the museum has been chosen, as finding museum space on an already-cramped base is a challenge, Lundquist said. But two potential &#8220;lower real-estate options&#8221; are being considered: a Showa-era wood frame building that was taken off the demolition list and an unoccupied section of the base&#8217;s hand-dug cave system, according to Lundquist. There are 16 miles of caves around the base, and though most have been deemed unsafe and walled off, a newer section may be viable, he said.

With these efforts, the base hopes to build &#8220;a better bridge to the community,&#8221; Lundquist said.

&#8220;The Japanese have a long history here, and we want to open that to them. And the more Americans understand the history, the more considerate and respectful they will be of these sites here and in the city of Yokosuka,&#8221; he said.

For more information or to donate historical objects, contact Lundquist at: jon.lundquist@fe.navy.mil or the base&#8217;s public affairs office at DSN 243-5607.