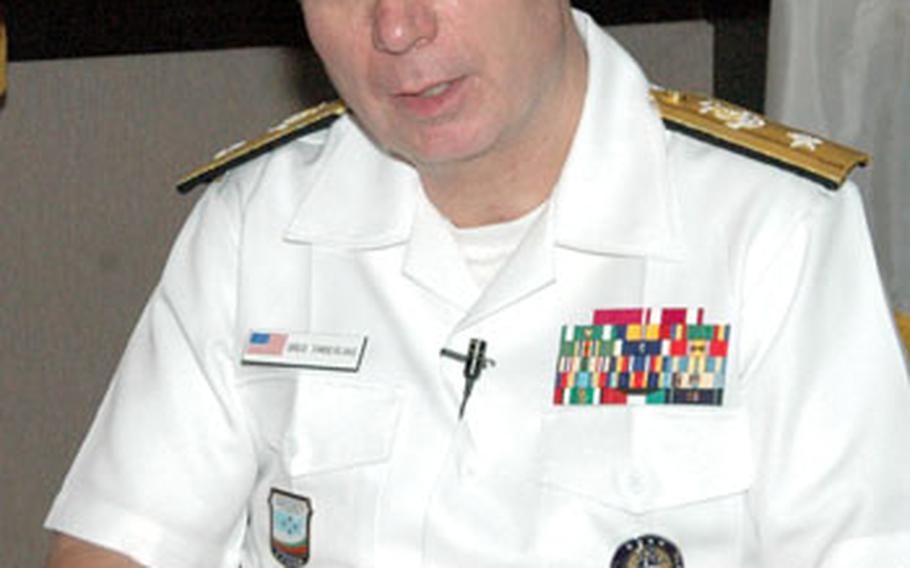 &#8220;We were poised and ready to fight 24/7 to treat any type of combat trauma,&#8221; recalled Navy Capt. Kevin Knoop of the abdominal and head injuries and amputations he saw during his time as head of a surgical shock-trauma platoon in Taqaddum, Iraq, in 2005.

Knoop and other humanitarian-assistance and combat-trauma experts from five countries gathered at U.S. Naval Hospital Yokosuka this week for the 5th-annual Multinational Military Medicine Conference, which included discussions on disaster triage, the Bali and Lebanon evacuations and how to treat patients exposed to nerve agents.

Capt. Michael J. Krentz, Yokosuka hospital&#8217;s commanding officer, said an important element of this conference was that each speaker has real-world experience.

Someone like Knoop, who during a break in the conference told of an incident in Iraq involving a soldier hit by an IED.

&#8220;A buddy applied direct pressure and brought him in, so he was in our facility six to eight minutes after the injury happened,&#8221; he said.

We were &#8220;looking for and finding vascular injuries. Working in a deep, dark hole that kept filling up with blood. It was a very challenging surgery,&#8221; Knoop said. &#8220;He had one-percent chance of survival when he hit the door, and we did everything we could. We were able to save his life.&#8221;

Timberlake said the military medical community is broadening its focus from major combat operations to the full range of military missions including stability, security and humanitarian assistance.

The importance of this conference is that it &#8220;provides a better understanding of what each country brings so we can better support each other,&#8221; he said.

Knoop said the conference really drove home the point that all peace-minded countries are on the same team.

&#8220;We may have different cultures and governments, but this is a joint mission - for world peace,&#8221; Knoop said. &#8220;This isn&#8217;t a political war between republicans and democrats. We are fighting an enemy that is very elusive and destructive to societies and cultures.&#8221;