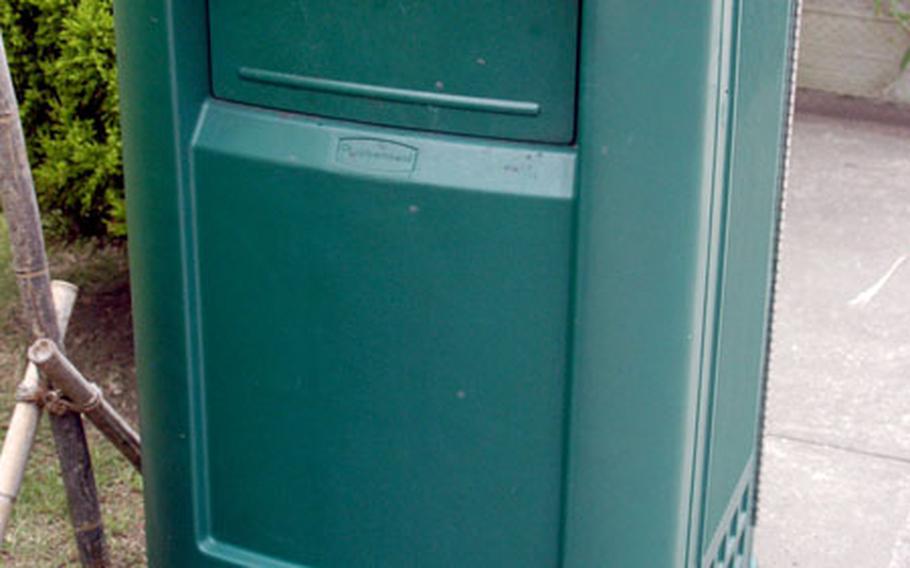 About a dozen new trash receptacles like this one have been installed across Yokosuka Naval Base in an effort to eliminate litter. (Juliana Gittler / S&S)

YOKOSUKA NAVAL BASE, Japan &#8212; Yokosuka Naval Base Commander Capt. Gregory Cornish is using a dozen new trash cans, an appeal to the community and an eagle eye to nip a nagging problem in the bud: litter.

In two columns published last month in the weekly base newspaper Seahawk, Cornish asked the community to help stamp out litter and graffiti.

With the receptacles in place, now he&#8217;s asking for a mind-set change &#8212; to persuade everyone to dispose of litter and cigarette butts properly.

Cornish said he has asked the duty section and transient personnel unit to take extra care cleaning up litter and emptying trash cans.

Cornish also has turned his attention to graffiti.

Graffiti crops up every few weeks or so on Yokosuka or Ikego in places such as schools and common-use pavilions, he said.

He said some residents might be used to differing stateside attitudes toward graffiti, but a less-pressing issue at home is a big problem in a small overseas enclave such as Yokosuka.

It also draws resources from the community. &#8220;For every dollar we spend running around taking care of things like graffiti or picking up trash, it&#8217;s one less dollar&#8221; available for youth center or MWR programs, Cornish said. &#8220;It drags resources and it drags people away from things that could better serve the community.&#8221;

The punishments are harsh for those caught defacing base property. Active-duty servicemembers can be punished under the Uniform Code of Military Justice. Dependents face a trip to the civilian administrative forum and community service or worse, depending on the severity of damage.

Cornish said he hopes problems won&#8217;t intensify during the summer, when schools are in recess. He also hopes parents will get involved and keep kids from expressing themselves on a wall or pavilion.

Keeping the base clean is a community effort but one that rewards everyone, he added &#8212; one going well so far although &#8220;there are a couple of areas we could do better as a community.&#8221;