Yokosuka commander ready to take the helm of USS Chancellorsville 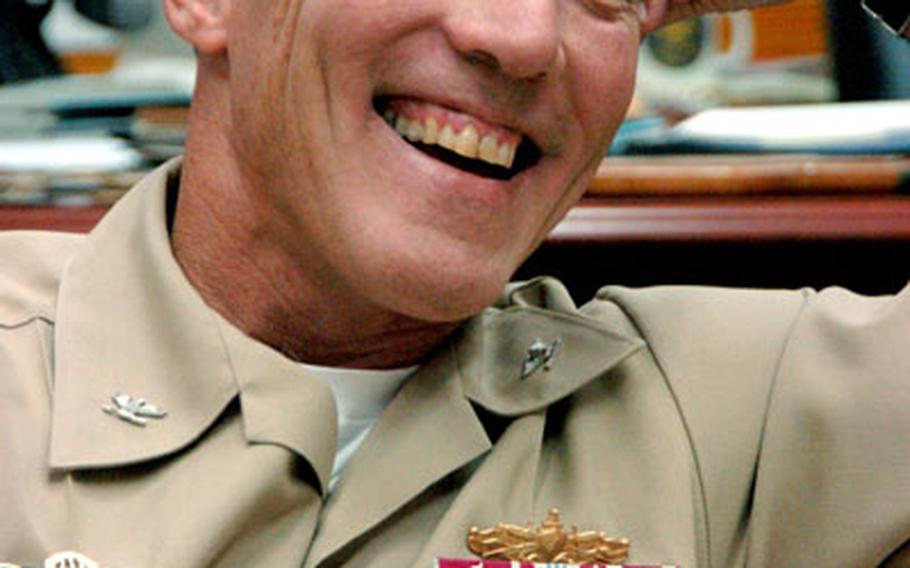 YOKOSUKA NAVAL BASE, Japan &#8212; After almost four years of shore duty, base commander Capt. King Dietrich has a slight case of sea fever.

It shouldn&#8217;t be long before he&#8217;s there. Dietrich &#8212; who attended kindergarten and his senior year of high school at Yokosuka &#8212; won&#8217;t be leaving town, exactly. Dietrich is about to become the captain of the USS Chancellorsville, one of the 7th Fleet&#8217;s guided missile cruisers.

The change will be in two steps. In January, Dietrich will head back to the United States for a few months. Taking command of the base will be Capt. Gregory Cornish, formerly the commander of Mine Countermeasures Squadron Three, based in Texas.

Dietrich will return to Yokosuka next spring and take command of the ship in June. From his tenure as base commander &#8212; akin to being mayor, but with much more power &#8212; he&#8217;ll leave behind some successes, some unfinished business and a sad executive assistant.

That will be good news for Chancellorsville sailors. Dietrich, 47, known to base residents through his attendance at various community events and his weekly call-in TV show, tends to mean what he says, and say what he means.

Dietrich was born into a Navy family &#8212; the reason he did two tours in Yokosuka while a child &#8212; but he had planned something different for himself.

However, in his last year of college, where he majored in psychology, he had an epiphany.

Dietrich said he&#8217;d count base beautification among the successes of his time as commander. He also has high hopes for a project he started when he arrived: an extensive remodel of the Seaside Club and its environs, now industrial and bleak but with the potential to be &#8220;the prettiest property on the base.&#8221;

Supporting the ships means supporting the sailors with MWR programs and other efforts to enhance quality of life, Dietrich said, in addition to making the waterfront responsive to ships&#8217; needs without adding another layer of bureaucracy.

He&#8217;s less pleased with the job he&#8217;s done addressing the parking shortage on base. The shortage has existed for some time; Japanese authorities are loathe to allow new parking garages because of their potential to bring even more cars and people, so it&#8217;s difficult to create new spaces. Dietrich has formed a plan to free up existing spots by taking away hundreds of designated spaces for various commands and making them open to the public or &#8220;customer,&#8221; he said.

He also, despite some criticism, added one designated space some months ago. At the commissary, next to the spots for commanding officers, executive officers and the always open admiral&#8217;s spot, he made a spot for ensigns.

Then he decided to up the entertainment ante and suggested a poll to decide whether the ensign spot would remain.

Dietrich said he enjoyed his frequent dealings with Japanese officials, and he enjoyed dealing with base residents. Sometimes, though, it was hard to keep a straight face, he said &#8212; when people complained that those who&#8217;d won a base landscaping award had used &#8220;plastic flowers,&#8221; for instance, or when a caller complained about a transvestite using the women&#8217;s dressing room at the Navy Exchange.