Yokosuka channels base talk to TV with ‘Commander’s Corner’ 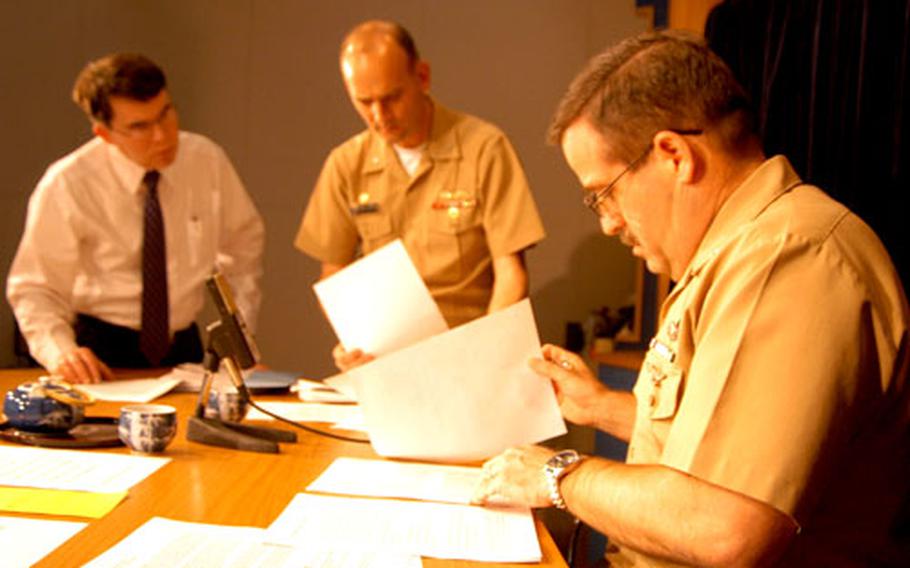 No problem. Master Chief William Holz isn&#8217;t shaken by the occasional hang-up or the on-air kiss of death &#8212; silence. Even if he is doing a live television show.

&#8220;We always have something to talk about,&#8221; Holz says, gesturing to a stack of papers ranging from event announcements to e-mail gripes about Commander, Fleet Activities Yokosuka, or CFAY.

And, while Capt. Gregory Cornish has done his share of interviews, he never had to &#8220;patter&#8221; before. But regular television appearances are making CFAY&#8217;s commanding officer easy to recognize, he said.

Meet the hosts of &#8220;Commander&#8217;s Corner,&#8221; a live, interruption-free, call-in show airing two Thursdays a month on Yokosuka Channel 12. Holz and Cornish spend an hour tackling a variety of questions tossed their way by anonymous callers.

Any base function is fair game. Traffic and parking are favorites. Issues raised in last week&#8217;s show ranged from larger women&#8217;s clothing sizes at the Navy Exchange to concerns about holiday liberty behavior. One caller wanted to know where he could find scrap metal.

Judging from the number of calls, letters and e-mails the show gets, it is a popular &#8220;pressure valve&#8221; for the Yokosuka community, CFAY media producer Sandra Fallon said.

&#8220;The questions run the gamut, and even if the hosts can&#8217;t answer them right away, a department head might be watching who can phone in the answer,&#8221; Fallon said.

&#8220;Doing a live call-in show is not rocket science,&#8221; Molter said, referring to the behind-the-scenes ballet of juggling phones, running cameras, monitoring sound and looking up information for the two on camera. &#8220;The rocket science came in when we added live Web streaming.&#8221;

The personality of the show often depends on the commander. Molter has worked with four commanders on the show. One used to affectionately tell callers they were &#8220;knuckleheads.&#8221; One would threaten to end the show and go to the football game if the calls lapsed.