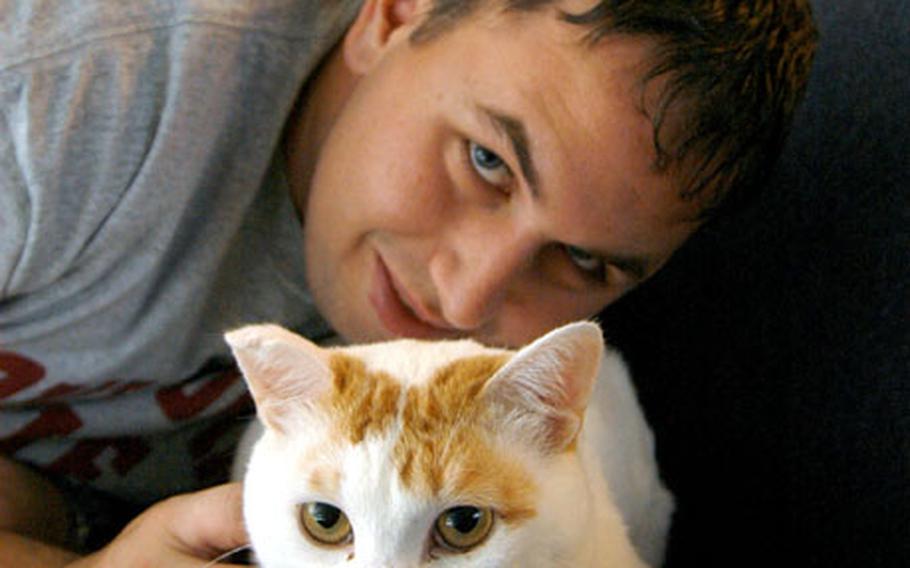 Petty Officer 3rd Class Steven Haynes, above, and his wife, Alison, are adopting Maru, a cat diagnosed with FIV, the feline equivalent of HIV. The disease, which can be transmitted only to other cats, afflicts one of every four felines in Japan. (Allison Batdorff / S&S)

Two cats with the feline equivalent of HIV, called FIV for feline immunodeficiency virus, recently found their way to Pets Are Worth Saving shelter at Yokosuka Naval Base.

Maru is one of them. The fat lap cat now lives with Petty Officer 3rd Class Steven Haynes and his wife, Alison, at Yokosuka Naval Base. They are adopting the male tom and don&#8217;t mind his species-specific disease. The other cat, Maggie, was adopted by a Japanese resident.

Like their human counterparts, FIV-positive cats can be the victims of misinformation, said PAWS President Dawn Zeumalt. Other than being more susceptible to diseases, the FIV cats&#8217; lives &#8212; all nine of them &#8212; can be quite &#8220;normal,&#8221; she said.

Granted, while in shelter they are quarantined from other felines &#8212; as FIV can be transmitted from cat to cat, usually through biting (saliva) and scratching.

Most transmissions occur in catfights, which is why FIV occurs in males twice as often than in females. Mother cats also can transfer the disease to their kittens during pregnancy or through their milk.

Japan leads the world in FIV &#8212; it&#8217;s estimated to afflict between 10 percent and 30 percent of domestic cats and as high as 44 percent among its large population of free-roaming feral cats. But since the disease&#8217;s discovery in 1986, every country that has tested the cat population for it has found it.

The disease works likes the human version and slowly breaks down the cat&#8217;s immune system over time. The similarities mean that certain drugs used for humans, such as AZT, can be used for cats, according to Vetinfo.com. FIV also is studied in relation to human HIV, along with similar viruses found in dogs and monkeys.

However, Maru&#8217;s diagnosis does have consequences: No more tomcatting around. The previously feral cat must stay indoors to prevent the spread of FIV.

Haynes said he thinks the cat is cozying up to the idea.

Maru will also have to go through a quarantine process when they take him back to the United States, though it won&#8217;t be any more stringent than other cats coming from Japan, Haynes said.

Maru&#8217;s disease also means the Hayneses won&#8217;t be getting any other cats, unless they are FIV-positive. This wouldn&#8217;t be too terrible, Haynes said.