Yellow ribbons for deployed at Mannheim base store 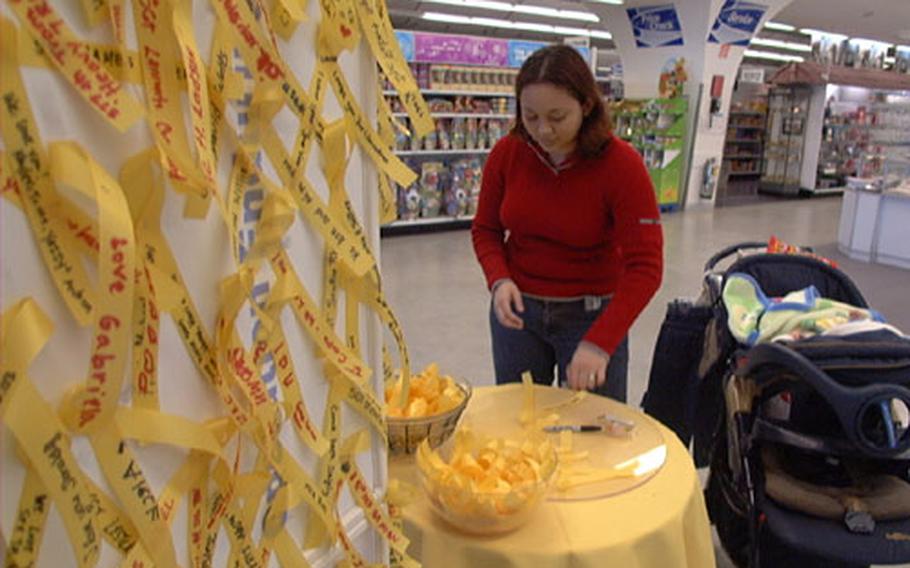 Wendy Travis, 24, of San Dimas, Calif., pinned up a yellow ribbon Thursday at the Mannheim PX for her husband Spc. Todd Travis, who deployed Feb. 25 with the 377th Transportation Company. (Rick Scavetta / S&S)

Wendy Travis, 24, of San Dimas, Calif., pinned up a yellow ribbon Thursday at the Mannheim PX for her husband Spc. Todd Travis, who deployed Feb. 25 with the 377th Transportation Company. (Rick Scavetta / S&S) Tawanna Owens and her son, Q&#39;tarius, hung a ribbon for all deployed soldiers, "so no one is left out," she said. (Rick Scavetta / S&S)

MANNHEIM, Germany &#8212; As soldiers deploy amid talk of war, one base store has created a place for customers to honor their loved ones with personalized messages on yellow ribbons.

The three-sided tower, which stands over 8 feet tall, is covered with hundreds of reminders for loved ones who have left for Southwest Asia.

Louise Eaton wrote a message to her husband, Sgt. Robert Eaton, of the 377th Transportation Company. Their third child, a son, is due April 22.

Johanna Scobey pointed out to her son Eric, 5, a ribbon that she had earlier dedicated to her husband, Air Force Master Sgt. Michael Scobey, who deployed Feb. 9.

Antonice Stokes, 14, taped up a ribbon for Chad Laqua, a teacher activated with the Reserves.

The first ribbon was pinned on the tower March 7 by Tina Lovitt, the Army and Air Force Exchange Service sales manager who designed the kiosk. Her husband, Lt. Col. Steven Lovitt, deployed to Kuwait with V Corps in February.

The overwhelming response to her idea is comforting, Lovitt said.

Like many U.S. military communites in Europe, both Mannheim and nearby Heidelberg saw several units deploy over the past month. Mannheim store officials wanted to show support for the troops and their families, Lovitt said.

Tawanna Owens used her ribbon from the bowl resting on a table beside the kiosk to dedicate it to all deployed soldiers.