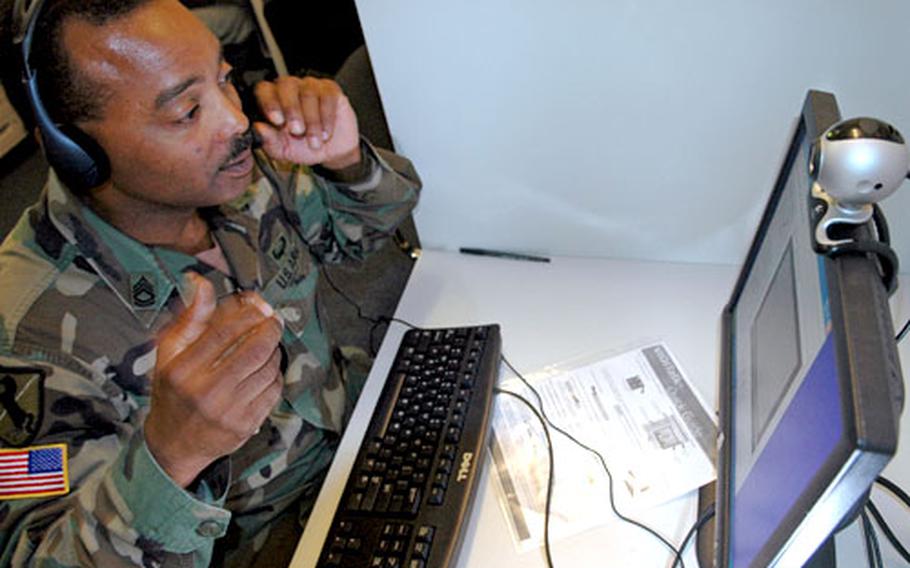 DARMSTADT, Germany &#8212; Nothing connects people better than the high-speed capabilities available in Yellow Ribbon Rooms &#8212; where families can stay in touch with deployed servicemembers via the Internet and a webcam.

That is, until the deployed soldier realizes none of the equipment provided in garrison is available downrange.

To help bridge the gap, a new feature has been added to these Army Community Center rooms that needs nothing more than an e-mail account.

Now troops don&#8217;t have to be pressed about exact times to hook up for webcam conversations or try to get online when friends and family can send instant messages.

The Vidi Talk allows loved ones to deploy high-quality streaming video messages to troops all around the world to view at any time.

And troops don&#8217;t need to open an e-mail attachment &#8212; they can simply click on the provided link to take them to the video, said Kent Thompson, the acting director at the ACS on Cambrai-Fritsch Kaserne.

The videos can be viewed at high- and low-speed connections with any media player installed on a computer. There is a five-minute limit on the Vidi Talk, he said.

&#8220;This is a great way to keep in touch with friends and family,&#8221; said Sgt. 1st Class Thomas Mitchem after sending a video to his cousin stationed at Camp Arifjan, Kuwait, through the Darmstadt Yellow Ribbon Room.

&#8220;For me, it&#8217;s more important for family in the States because of the time difference. I could stay up until 2 in the morning after work to try and talk to someone. Or, I could just tape them a message and they could see it whenever they get online.&#8221;

The Army&#8217;s intent is for the Vidi Talk capabilities to be put up in all Yellow Ribbon Rooms, Thompson said.

Currently the 233rd Base Support Battalion is covered, with a Vidi Talk in Babenhausen as well as in Darmstadt.

Plus, Thompson said eventually the Yellow Ribbon Room will be available 24 hours a day in Darmstadt because users will be able to sign out a key from the military police. The room will be moved to another office in the ACS building that is accessible from the outside, he said.

For now, the Yellow Ribbon Room is open only during the working hours of the ACS.

The Yellow Ribbon Room is strictly for the use of communicating with friends and family members through Internet use on webcams, IM and Vidi Talk.

When others are waiting, there is a one-hour limit to the Yellow Ribbon Room, Thompson said.