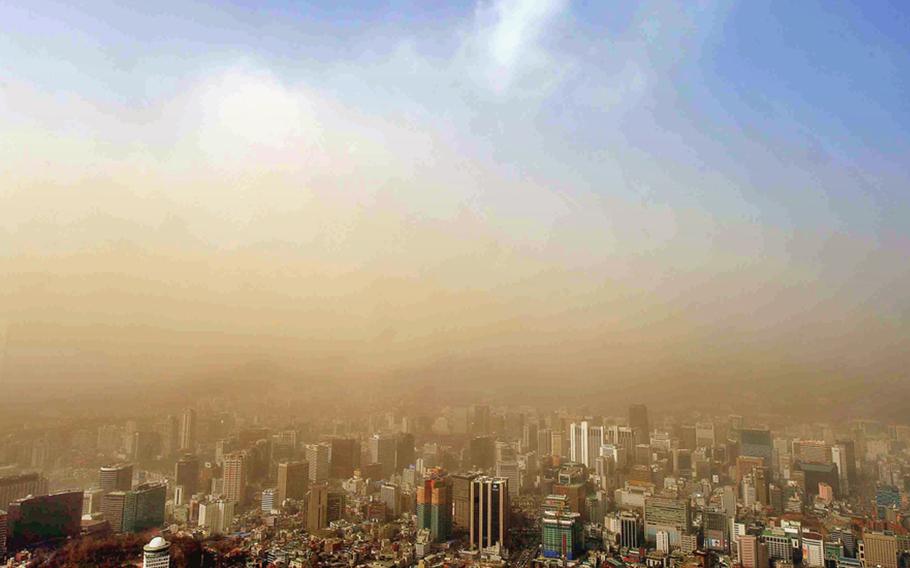 The weather phenomenon called HwangSa -- also referred to as Yellow Sand or Asian Dust -- has been known to engulf cities in South Korea. (Courtesy of U.S. Air Force)

The weather phenomenon called HwangSa -- also referred to as Yellow Sand or Asian Dust -- has been known to engulf cities in South Korea. (Courtesy of U.S. Air Force) 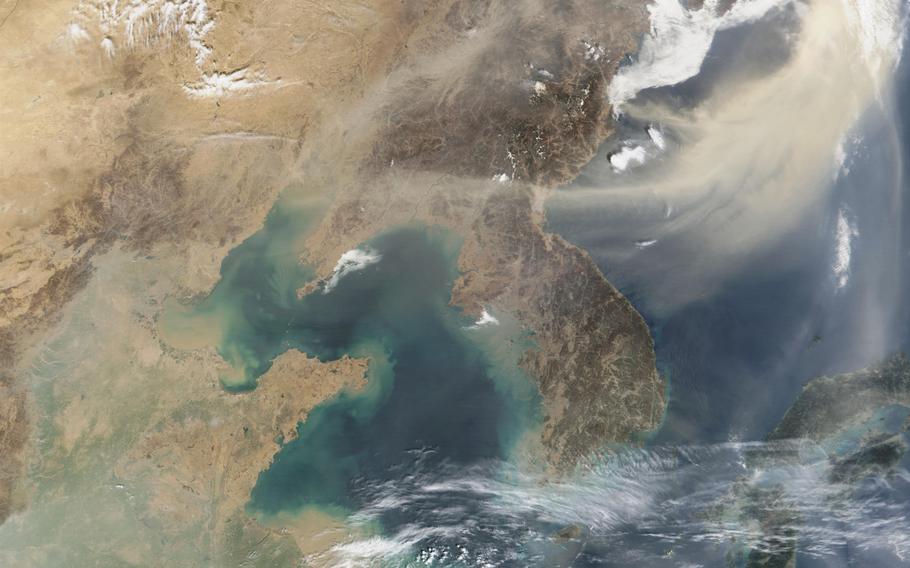 A large, dense plume of dust blows southward and eastward from the desert plains of Mongolia over Japan and the Pacific Ocean. The massive dust storm (brownish) can easily be distinguished from clouds (bright white). (Courtesy of NASA)

CAMP FOSTER, Okinawa — Just about the only thing clear about the skies over large parts of South Korea and western Japan each spring and summer is that an unhealthy yellow haze of pollution drifts over from China.

Mountains and the tops of tall buildings fade in the smog. Warnings are issued for residents to stay inside on the worst days.

Things are even worse in Beijing and other major Chinese cities, and the country has taken some steps to reduce the high concentration of desert sand and what’s known as PM2.5 pollution, installing emissions-cutting exhaust filters, reducing coal use, tightening vehicle emission standards and working to reduce particulate matter.

The effectiveness of the efforts is uncertain. Government officials and researchers in Japan and South Korea describe the situation as a delicate balancing act, where some believe China’s steps are working, while others say the haze hasn’t gotten any better and could get worse — depending on climate conditions, China’s enormous population and lofty industrial goals.

“Basically, since the late 1990s when the economic growth in China started, the particles started to come to Japan and South Korea,” said Toshihiko Takemura, associate professor of atmospheric pollution studies at the Kyushu University in Fukuoka, a couple of hours north of Sasebo Naval Base in southern Japan. “The amount of incoming PM2.5 in Japan neither decreased nor increased in the past 15 years.”

Col. Hee-Choon Sam Lee, chief of Force Health Protection and Preventive Medicine for the 65th Medical Brigade in South Korea, said particulate matter is associated with an increase in common illnesses including eye infections and upper respiratory conditions, such as coughing and asthma.

But because the military population in South Korea is small, it’s difficult to say whether air pollution causes an increase in those illnesses within the USFK community, he said. Korean hospitals — which have a larger pool of patients — report a link between declining air quality and illness, he said.

“It is not an acute problem (for the military), but over-long exposure to it can cause someone to have so many asthma attacks that it might not be feasible for that person to remain in Korea,” he said, adding that his comments represent his opinion and not that of the military.

A small handful of USFK-affiliated patients who are sensitive to air quality may experience health problems severe enough for them to consider going back to the U.S. early or to not extend their tours, he said.

Particulate exposure in South Korea is highest through the late fall and winter months, though that period has been coming earlier and staying later.

PM2.5 particles are about 1/30th the width of a human hair and can reach deep inside the lungs, according to Japan’s Environment Ministry website. They pose various health risks, especially to those with respiratory ailments, such as asthma and bronchitis, and at-risk populations such as children and the elderly, and could contribute to lung cancer and heart attacks.

PM2.5 often attaches itself to the sand, which is lifted by ascending air currents and carried by subtropical westerly winds, according to officials from Japan’s Fukuoka District Meteorological Observatory.

“The levels this year are lower than those of an average year, but this is basically attributed to the climate condition,” said Seiji Sugata, senior researcher at the National Institute for Environmental Studies Japan. “Because they fluctuate year by year, we should not react quickly to short-term trends. Should the climate conditions move adversely, the situation could worsen.”

Officials from South Korea’s National Institute of Environmental Research in Incheon said the levels there are not as bad as last year but are worse than past years due to climate conditions.

There are concerns that the dust season may be expanding.

Dr. Lee Sangsam of the Asian Dust Research Lab in South Korea said it began early this year — in January — in South Korea. Officials in the Japanese city of Fukuoka issued a health warning in July, later than usual.

The peak season of PM2.5 particles in western Japan is April and May, according to the Nagasaki prefectural government’s environmental health center. Density levels begin to rise in January and normally begin to subside after the rainy season and through summer when a high-pressure system in the Pacific Ocean dominates, according to officials at the center.

Residents in those two countries just have to deal with it.

“For handling particulate matter, people need to control some of their actions: controlling outdoor activities; wearing masks specially designed to filter particulate matter; closing windows to keep out particulate matter, cleaning houses by using wet vacuums and so on,” said Lee Jong-tae, a professor of Environmental Health at Korea University in Seoul.

The issue has certainly nagged China’s neighbors, but is also a real concern at home for the Chinese. State-run media has called for environmental improvements as conditions continued to deteriorate in Beijing.

Controlling dust and PM2.5 was the top issue at the 16th Tripartite Environment Ministers’ Meeting for China, Japan and South Korea in late April, according to a joint communique. But the meeting yielded nothing with teeth: The ministers exchanged environmental policies, agreed to share relevant data — including hourly PM2.5 monitoring — and pledged to work jointly to tackle nine priority areas, topped by air quality improvement.

Takemura said steps have been taken at the local level. In Yokkaichi and Kitakyushu, cities in northern Kyushu, citizens have been adversely affected by the pollution, causing officials to work closely with cities in China, offering technical supports and advice.

Deciding to rely on information from Japan’s extensive air-monitoring system rather than set up their own, the working group developed a three-tier Air Quality Awareness Program, which is being prepped for implementation. It focuses on education, air monitoring and notifications.

Stars and Stripes reporters Ashley Rowland and YooKyong Chang contributed to this report.