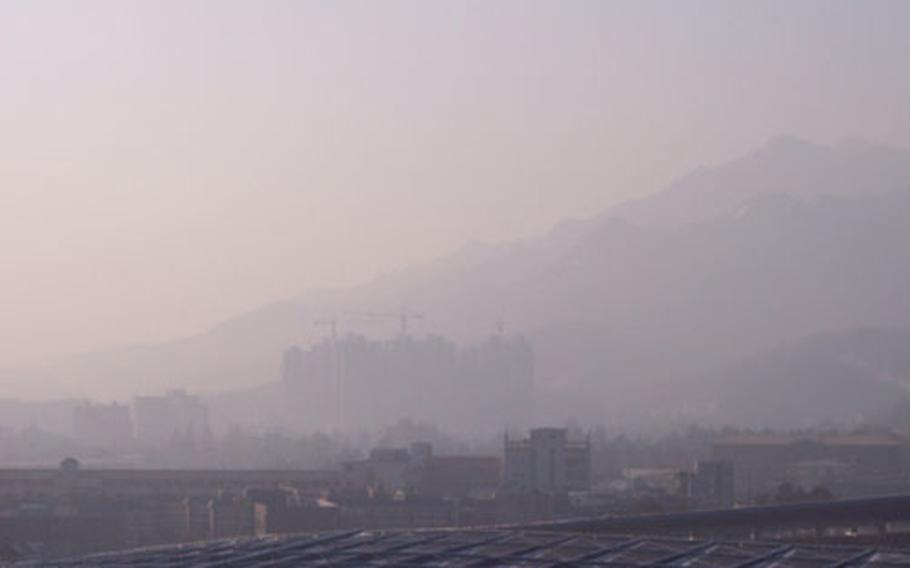 The polluted dust registered highest at Warrior Base and areas closest to the Demilitarized Zone, where the 263 parts per million per cubic meter of air came just short of the level at which people are recommended to cease outdoor activity.

A Korean Meteorological Association spokesman said Koreans do not consider the winter dust storms to be the same as the hwangsa, the yellow dust storm that plagues South Korea in the spring.

But in practical terms, they are the same, said 18th Medical Command officials. The current particulates are fine dust bound with heavy metals and pollutants.

Predicting conclusively whether the high dust levels will continue is difficult, said Lund and the Korean Meteorological Association&#8217;s Kim Seung-bae.

But the weak winds, warmer middays and lack of rain, which trap the dust on the peninsula, likely will continue, Kim said. &#8220;It is like we are stranded in a big gym with no way out but the dust continues attacking.&#8221;

People with asthma, heart disease, the young and the elderly should be especially mindful of dust levels, officials said.

The 18th Medical Command is working with American Forces Network to broadcast yellow-dust alerts on television and radio, Lund said.

The Atmosphere Policy Division of the South Korean Ministry of Environment has not put out an advisory or published any official research regarding toxic dust during winter, a spokesman said.

Levels above 151 parts per million per cubic meter of air are considered unhealthy and call for reducing all prolonged or heavy exertion, according to the 18th Medical Command&#8217;s Web site.

Earlier this week, Warrior Base, Kunsan Air Base, Osan Air Base and Camp Humphreys all exceeded 200 parts per million, which the 18th Medical Command calls &#8220;very unhealthy.&#8221;

Under such conditions, at-risk personnel are advised to avoid all physical activity outdoors, and all others to avoid prolonged or heavy exertion.

By Thursday afternoon, dust levels in most areas had settled under 100 parts per million in a cubic meter of air, which the 18th Medical Command rates as only a &#8220;moderate&#8221; level of health concern. Click here to monitor future dust levels at bases Korea-wide.

Levels above 151 parts per million per cubic meter of air are considered unhealthy, according to the 18th Medical Command. On Tuesday and Wednesday, the following levels were recorded: