Years after they fought in Afghanistan, US troops watch as their children deploy to the same war 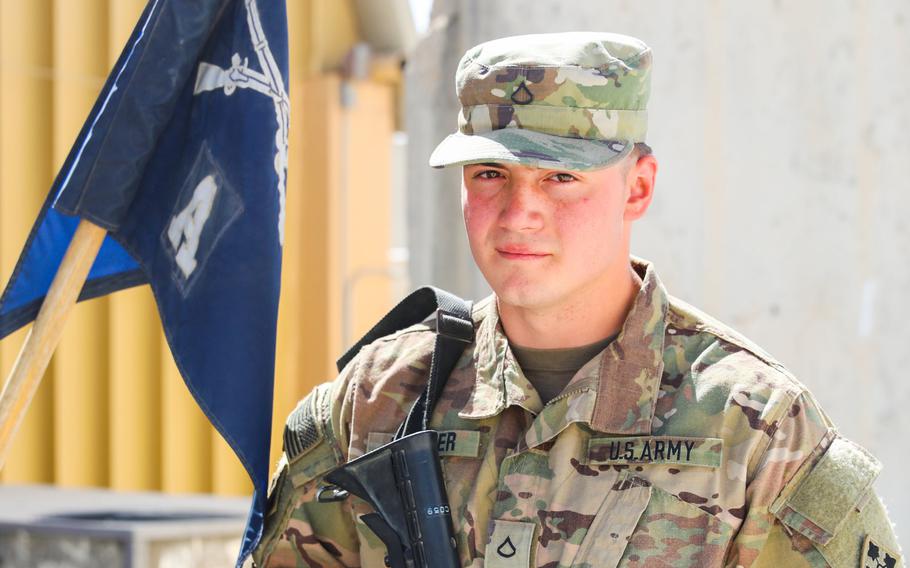 KABUL, Afghanistan — Nineteen years ago on Wednesday, a generation of Americans deployed to Afghanistan to root out the terrorists behind the 9/11 attacks, believing that by fighting in the country more than 7,400 miles away, they would spare their children the need to do so too.

But as the U.S. war in Afghanistan begins its 20th year, some of those same service members have watched as their sons and daughters have deployed to continue the fight.

“When we started this, people asked why I was going, and my response was, ‘So my sons don’t have to fight this war,’” said Master Sgt. Trevor deBoer, who has deployed to Afghanistan three times with the 20th Special Forces Group since 2002.

Nearly two decades later, deBoer’s son, Spc. Payton Sluss, also served in Afghanistan — including at Forward Operating Base Fenty, north of the city of Jalalabad, where deBoer had served.

“My feet were walking the same land you were,” Sluss said to his father in a joint phone interview with Stars and Stripes.

The war, and Afghanistan itself, were very different when Sluss arrived in 2018. The U.S. had shifted its focus from eliminating 9/11 masterminds al-Qaida, who had been given safe haven by the ruling Taliban, to rebuilding the country and training Afghan forces. At the same time, the Taliban regained strength and launched an insurgency against the American-led coalition.

Around 150 troops from the U.S.-led coalition had been killed in insider attacks as of 2018, data from the military show. Insider killings peaked in 2012, according to the data.

While deBoer watched films with Afghan troops, Sluss watched their body language, his weapon at the ready, to ensure that they did not turn on the Americans who were training them and kill them.

Sluss sees a measure of success coming out of the U.S. involvement in Afghanistan.

“An inch is an inch, progress is progress no matter what,” Sluss said, referring to advances in women’s rights, free speech, access to education and other changes over the years.

DeBoer, on the other hand, said he often asked himself during his many deployments if the U.S. was making progress or “just chasing our tails?”

Michael Kreuger fought in the Pech Valley in 2010 and sometimes asked himself why he did. Eight years later, his son Trenton deployed to Afghanistan — like his father, with the 2nd Infantry Brigade Combat Team, 4th Infantry Division.

The elder Kreuger, who left the Army as a sergeant, now hopes his grandson won’t also deploy to Afghanistan to fight the same battles “for the same reason.”

President Donald Trump has been vocal about ending the U.S.’s “forever wars,” repeatedly tweeting that he wants to “bring our soldiers home.”

Under a U.S.-Taliban deal signed in February, all international forces could pull out of Afghanistan by the middle of next year if the Taliban fulfill pledges they made under the agreement, including to sever ties with groups like al-Qaida.

Bajun Mavalwalla, 31, a former sergeant, and his namesake father also both deployed to Afghanistan. They even met up there in 2012.

The elder Mavalwalla, 55, a former captain, said the country has made great strides since he first served there in 2002 with the 19th Special Forces Group.

“Afghanistan didn’t have a functioning toilet when I showed up,” he said. When he returned in 2012 as an advisor to police in the western city of Herat, the improvements were “unbelievable,” he said.

But his son, who was barely a teenager when his father first went to Afghanistan, said he was disillusioned when he deployed to Kandahar province in 2012 with the 250th Military Intelligence Battalion.

“I wanted to go out and help people, serve my country … (but) I just sort of contributed to this deepening mire,” he said.

Schools that had been built for the Afghans had been destroyed or defaced, he said. He sometimes watched as fellow soldiers did things, like destroy farmers’ walls by driving across them, that did little to help the Americans win hearts and minds.

The son who had followed in his father’s footsteps eventually dropped his idea of making a career in the military.

“Did the good really outweigh the bad? Did we make things better? Or did we just make things different?” he said.

The different ways the father and son view the war in Afghanistan were like the different interpretations that blind men might have after encountering an elephant, the older Mavalwalla said. One touches the tail, another a leg, another the trunk and each comes away from the meeting with a unique idea of what they’ve just experienced, he said.

“You have to have seen what it was 20 years ago, and then see it again 10 years later, to appreciate the improvement,” the father said.

But he also worried that if the U.S. withdraws too hastily from what has become its longest war, any gains he and his son fought for would be undone.

American troops might have to return to the country one day, like they did in Iraq after the Islamic State group took advantage of the power vacuum left by the U.S. drawdown there. They seized swathes of territory, including Iraq’s second city, Mosul, in the north.

“If we withdraw, Afghanistan will survive, but I don’t think it will survive very well,” the elder Mavalwalla said.

“It’s a hell of a lot harder to go back in with any credibility” than to stay the course until the time is right to pull out, he said.