‘Year of the Police’ a rocky one so far in Iraq 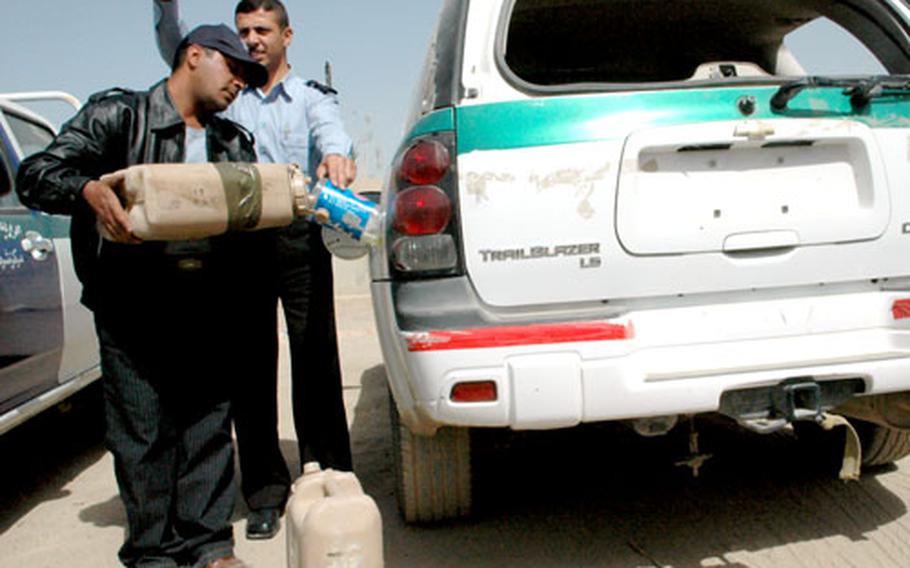 Iraqi police in the Rusala section of western Baghdad fill their trucks with gasoline provided by U.S. troops. Just getting out to patrol is a challenge for the Iraqi police force without sufficient gas. (Andrew Tilghman / S&S)

&#8220;We would like to go with the police on patrol today,&#8221; Winslow told an Iraqi police colonel after he and three trucks of soldiers showed up one morning earlier this month at the local police station. &#8220;We&#8217;d like to go with them and drive all over the sector.&#8221;

The police chief smiled politely but noted one key problem.

Gasoline is just one of the challenges Winslow and his soldiers face as they try to help train and mentor the Iraqi police units in this area. More broadly, U.S. commanders in Iraq have dubbed 2006 the &#8220;Year of the Police,&#8221; focusing on the effort to rebuild a force that had fallen into disrepair.

In parts of Baghdad, the basic tactic of going on patrol is troubling for some police units, who consider it a full-time job just to guard their own stations from criminals and insurgents.

&#8220;Our goal is to get the police out of the station and get them out of their trucks,&#8221; said Sgt. 1st Class Randy Weaver, who works alongside Winslow with the 2nd Battalion, 22nd Infantry Regiment of the 10th Mountain Division.

In Rusala, a small city on the western edge of Baghdad, U.S. troops say there are only routine problems with criminals and insurgents. But the dusty streets and predominantly Sunni neighborhoods are intimidating to the local police, who are mostly Shiites.

The police here try to cultivate a good rapport with locals. That is sometimes hampered by ill-will generated by police special forces units, a separate division of the Iraqi Ministry of Interior that has been accused of being infiltrated by Shiite militias.

The relationship between the police and the Iraqi army is also sometimes an issue. On a recent patrol, when several police trucks made a routine stop at an Iraqi army checkpoint in their neighborhood, the Iraqi soldiers were unaware and appeared unsettled by the police presence.

&#8220;I need to know when they come and what they are doing in my sector,&#8221; said Lt. Ali Mhesen, who was in charge of the Iraqi army checkpoint.

Although Winslow had notified the U.S. soldiers at the Iraqi army base that the police patrol would be in the neighborhood, the information apparently was not relayed to the Iraqi units on the ground. In many instances, basic daily information must travel up the chain of command and is shared only by the upper-level ministers in Baghdad, soldiers and Iraqi police said.

For now, Winslow and his soldiers hope to help the local police here to be able to perform its basic functions.