Year after Heidelberg parade death, only time marches on 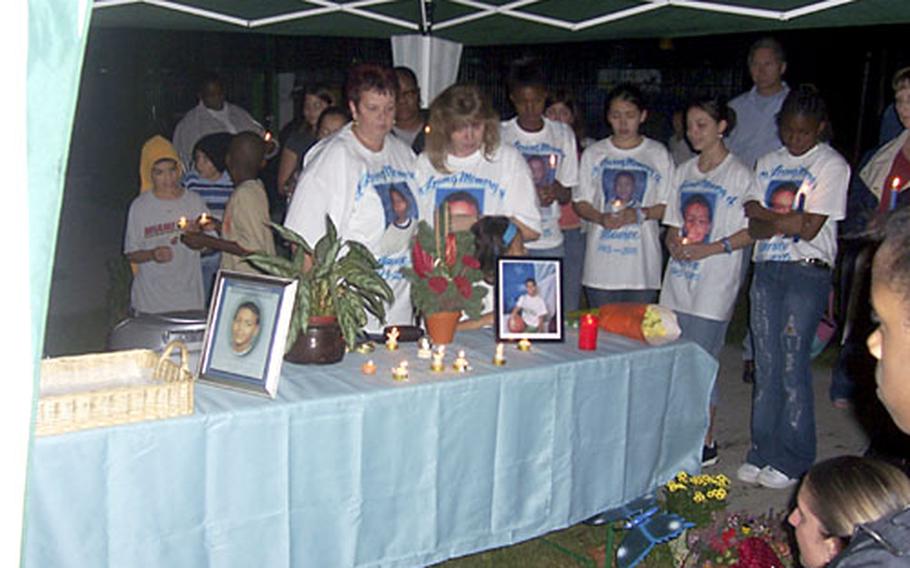 Friends of Maurice Long gather Thursday for a candlelight vigil marking the one-year anniversary of the boy’s death during a homecoming parade accident at Patrick Henry Village in Heidelberg, Germany. (Courtesy of Joseph Long)

One year after 12-year-old Maurice Long was killed during a homecoming parade accident, the boy&#8217;s family and the man charged in the death are still waiting for resolution.

Chief Warrant Officer 3 James Long and his wife, Andrea, attended a candlelight vigil Thursday night at Heidelberg Middle School on Patrick Henry Village in Germany. It was the anniversary of their son&#8217;s death, for which no one is taking blame.

Meanwhile, Richard Keesee, who lives just a few hundred yards away, was still wondering if he was going to be sent to prison. He faces up to five years on a charge of negligent homicide, and a German court is deciding if it will prosecute.

James Long said he believed Keesee acted negligently by allowing youngsters to hop on and off his crowded 1978 Ford Bronco during the parade. But Long also blamed the school and Army Garrison Heidelberg for allowing the parade to be unsupervised.

Long said he is going to file a tort claim, like a lawsuit, against the Army, seeking financial damages for pain and suffering.

Keesee, who is in Heidelberg because his wife was twice kept there by the Army&#8217;s stop-loss program, said he wants to go back to the United States, but only after his wife returns from a deployment to Iraq, and after his court case is resolved.

A lower court cleared Keesee of charges. But in Germany, prosecutors can appeal the case to a higher court, which they did.

Maurice, a seventh-grader, died Oct. 19, 2005, after he latched onto Keesee&#8217;s crowded parade vehicle for a tow while riding a nonmotorized scooter. At the end of the parade, the boy was knocked to the ground from behind by the Bronco&#8217;s protruding spare-tire holder.

He struck his right forehead on a curb; it took nearly 20 minutes for a German ambulance to arrive, and the boy died on the scene.

Under German law, Keesee is responsible for the people in and around his vehicle, even when it is creeping along at walking speed during a parade on a U.S. installation.

Army investigators previously said that a communication breakdown between the garrison and school caused the parade to be unsupervised by military police.

The garrison declined to comment, other than to profess that safety and safety training is a high priority and continuously re-evaluated.

Heidelberg High School decided not to have a homecoming parade this year out of respect for the Long family, according to Dr. Allen Davenport, the school&#8217;s principal.

Keesee pulled his two teenage daughters out of the school and is home schooling them. He said he didn&#8217;t want them exposed to potentially cruel behavior.

Long said he was brought to tears Thursday by the turnout at the candlelight vigil.