Buy Photo
Col. Chuck Yeager, commander of the 405th Fighter Wing, picks out flying gear at the 523rd Tactical Fighter Squadron in preparation for a flight in an F-100. (Andrew Headland Jr./Stars and Stripes)

Buy Photo
Col. Chuck Yeager, commander of the 405th Fighter Wing, picks out flying gear at the 523rd Tactical Fighter Squadron in preparation for a flight in an F-100. (Andrew Headland Jr./Stars and Stripes) 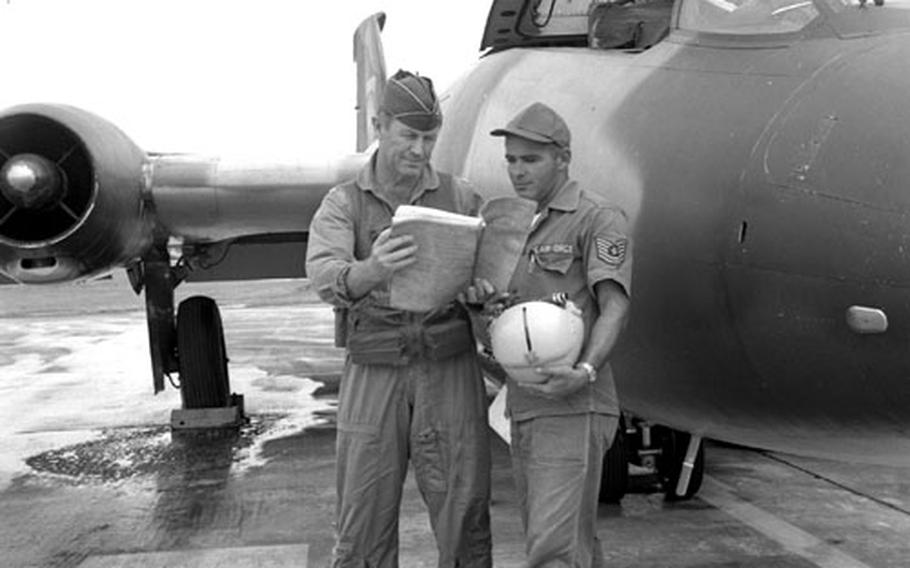 CLARK AB, R.P. — Col. Charles E. (Chuck) Yeager, first pilot to crash the sound barrier, says that in spite of safety precautions there will eventually be a major accident in America's space program and "the public should be educated to it."

"As in all research and development programs," he explained, "eventually we will have a situation from which we cannot recover."

"You are going to have accidents and should expect it," he said.

But Yeager cautioned that the U.S. should not, as in Great Britain, allow any major setbacks to retard its supersonic and space programs.

Supersonic developments were halted by the British in 1947 when two pilots were lost while engaged in speed of sound experiments in the DeHavilland Swallow.

Yeager himself hasn't slowed down much since making his historic penetration of the sound barrier over California's Mojave Desert in 1947.

In fact, he's now tackling what he feels is one of the most challenging assignments of his 25-year military career: commander of the 405th Fighter Wing — a unit of the Thirteenth Air Force — which supports the war in Vietnam from Clark AB.

Yeager said that directing the wing is a big contrast to his previous assignment as commandant of the Aerospace Research Pilot School at Edwards AFB, Cal., where future space pilots are groomed.

A youthful 43, Yeager speaks with infectious enthusiasm about his new assignment. During a tour of 405th Fighter Wing facilities he pointed out the number of aircraft make it the largest wing of its type in the Air Force, including F-100, F-102 and B-57 squadrons.

"Both our B-57 squadrons and our F-102 squadrons are built way up to support the wing's mission," he said. "We are much larger than a normal fighter wing, with aircraft and crews."

Yeager flies the B-57 and F-100 frequently on missions to Southeast Asia. He is combat rated in both types of aircraft.

His pride in his outfit is obvious when he makes a tour of the facilities.

At one location airmen were pulling the engine of a F-102 Delta Dagger. Out on a runway another crew was swarming over an F-100.

"Everything is squared away and everybody knows exactly where everything is," Yeager remarked. "All of the pilots are highly experienced. Many have 100 to 150 missions in Vietnam."

As a research pioneer in experimental aircraft, Yeager has a keen interest in space development programs being carried out by the United States.

But despite being a rocket plane pioneer and veteran test pilot, Yeager said he has no hankering to be an astronaut.

"I think that once you have done your share you should step down and let others have their share, let different pilots share different concepts," he said.

Yeager, who has flown 138 different types of aircraft, termed the work he did with the experimental Bell X-1 rocket plane series in which he broke the sound barrier the most interesting he has undertaken. He worked with the Bell X-1 series for nearly six years at Edwards AFB.,

The oldest plane he's flown was a 1911 Curtiss pusher. One of the newest is the National Aeronautics and Space Administration's M2-F1 Lifting Body, a space research vehicle being designed to develop maneuverability during the re-entry of spacecraft into earth's atmosphere.

In 1949 he became the first American pilot to zoom more than four miles up from a ground takeoff in less than two minutes in a fully rocket-powered aircraft.

Another first was to streak over Edwards AFB at 1,650 m.p.h. in 1953 in the Bell X-1A, thus becoming the first military pilot to fly twice the speed of sound.

A native of Hamlin, West Va., he lives on Clark AB with his wife Glennis — he named the Bell X-1 after her — and two daughters, Sharon, 17, and Susan, 16. Sharon is a senior and Susan a junior at Wagner High School.

A son, Donald, 21, is a sophomore at West Virginia University. Another son, Michael, finished one year of college and is now preparing to enter military service.