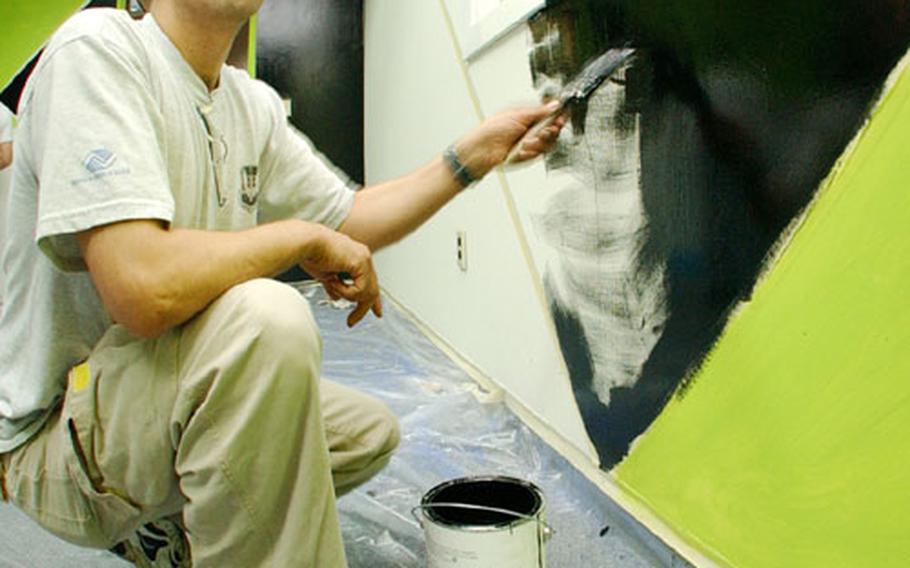 Community center director Ian Foster paints one of the walls of the XBox Room at Lajes Field. U.S. Air Forces in Europe has dished out $200,000 to help build 17 online, multiplayer Xbox gaming centers at 14 bases, both large and small, across the continent. (Courtesy of USAF)

U.S. Air Forces in Europe has dished out $200,000 to help build 17 online, multiplayer Xbox gaming centers at 14 bases, both large and small, across the continent.

Those bored with playing video games by themselves or against a roommate will be able to play someone at another base in Europe or nearly any place across the globe.

Most of the new centers are expected to be open by the end of the fiscal year.

Lajes Field in the Azores islands plans to open its room once it receives the required high-speed Internet lines at the community center.

Ian Foster, the base&#8217;s community center director, said there will be no charge to play, but some centers might put time limits on players.

The primary purpose of the gaming rooms is to connect young airmen throughout the region, especially those transiting through Europe, to have something fun to do on their down time.

But even commanders, who might remember playing the now-archaic &#8220;Pong&#8221; on Atari, are itching to get their chance to grab a game controller.

Foster suggested to his deputy commander that the colonels from the different bases in Europe should have a commandwide Xbox death match.

Those who set up the Xbox room in Lajes have painted the walls black and lime green, the game system&#8217;s primary colors. They also have used the money to buy comfortable chairs and four Xbox systems that will be linked to Xbox Live, the subscription network that allows gamers to play against each other online.

Spangdahlem Air Base in Germany hosted the pilot program and received its Xbox gaming room in April.

The Air Force chose Xbox over other game systems because of its online gaming network, Quinn said.

Xbox Live allows players to compete against anyone who is hooked up to the network.

For example, someone located in the Azores could race a virtual motorcycle against an airman stationed at Ramstein Air Base in Germany &#8212; then team up with someone from Izmir, Turkey, to win the Super Bowl on &#8220;NFL Fever.&#8221;

Later, they could try going head to head with their Mech tank warrior against someone from Aviano Air Base in Italy or a friend in Los Angeles.

Adding to the fun is the ability to communicate with the other players &#8212; even talk a little smack about opponents.