WWII vets filled with memories as they visit fallen in England 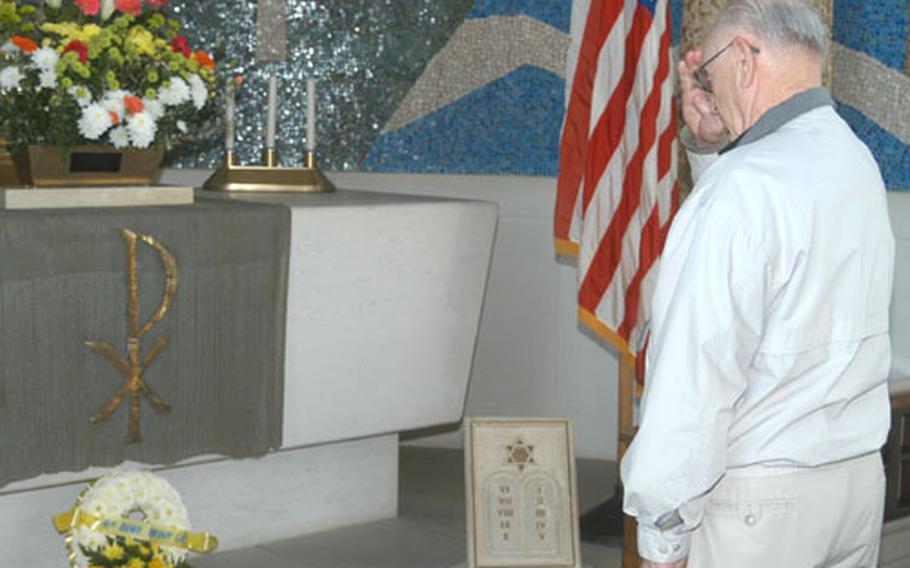 Conrad Lohoefer, 78, salutes Sunday after placing a wreath at the chapel of the Cambridge American Military Cemetery in England. Lohoefer and a handful of other veterans of the 91st Bomb Group paid respects to comrades killed in World War II. (Ron Jensen / S&S)

MADINGLEY, England &#8212; Sam Cipolla stood quietly in the sunshine and pulled a white handkerchief from his pocket to wipe the tears from his eyes.

In a ritual he has repeated on four earlier visits to the Cambridge American Military Cemetery, Cipolla placed a wreath Sunday at the grave of his friend and comrade in arms, Joseph Uhrick, who was 19 when he was killed in World War II.

The two were crewmembers on a B-17 with the 91st Bomb Group based in England. Uhrick, a waist gunner, was killed with two other crewmembers by shrapnel from German anti-aircraft in November 1944. He had taught Cipolla, the aircraft&#8217;s ball turret gunner, how to play the card game between missions at their base in Bassingbourn, just a few miles west of Cambridge.

Cipolla, who lives in Pleasant Prairie, Wis., was one of five veterans of the 91st who visited the cemetery during a two-week tour of England. With wives, children and grandchildren, the entourage included 20 people.

The 91st Bomb Group was credited with more than 340 missions between November 1942 and April 1945, which means the men who came Sunday to pay respects know a thing or two about war. When asked for their impressions of the recent combat in Iraq, the answers varied.

The technology of today&#8217;s military impressed the former newspaperman. The ability to fly from the U.S. to perform a bombing mission, as the B-2 bomber crews did from Whiteman Air Force Base, Mo., is hard to believe, he said.

But technology can only do so much, he addedd.

Paul Chryst, a B-17 bombardier and navigator with 38 missions under his belt, was less impressed.

Chryst, who spent 27 years in the Air Force, said the technological advancements in air warfare have turned combat into &#8220;Star Wars.&#8221;

He said the buildup to the war caused enough concerns for security that his tour group kept shrinking. On the day the war started, 10 more people pulled out.

But this day was for honoring those who died in a war long ago. At the chapel, Lohoefer placed a wreath &#8220;on behalf of all those who never returned from their missions.&#8221;