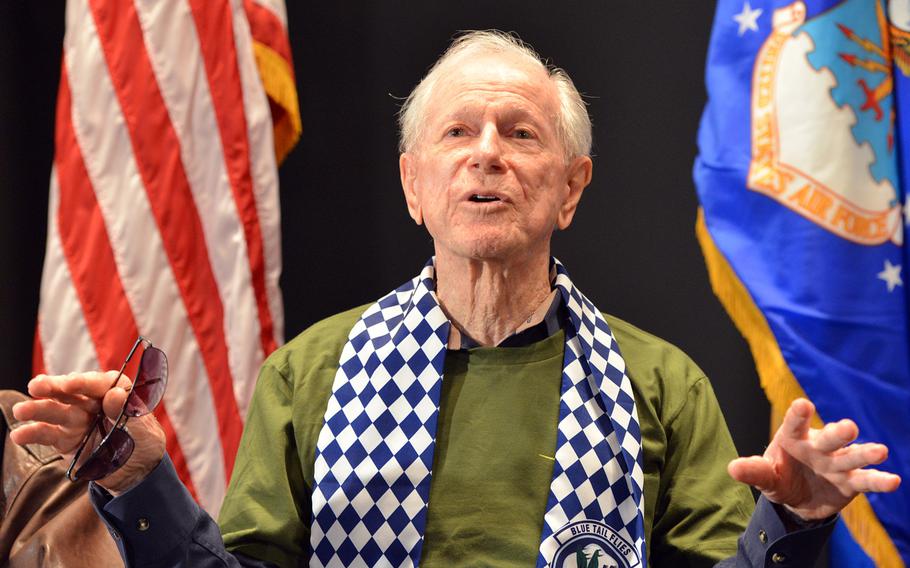 World War II veteran Bill Prindible during a visit to Ramstein Air Base, Germany, Monday, June 2, 2014. Prindible was a C-47 pilot with the 37th Troop Carrier Squadron on D-Day. (Michael Abrams/Stars and Stripes)

KAISERSLAUTERN, Germany — At first, it wasn’t the flak that scared Julian Rice. It was the fog.

It was just after midnight on June 6, 1944, and the young Army Air Corps officer was at the controls of one of 822 cargo planes packed with more than 13,000 paratroops for an airborne assault that would set the stage for the beach landings at Normandy.

Rice could see anti-aircraft tracers rising up in the distance, far enough away not to be an immediate concern, he said. The low-lying bank of fog blanketing the Normandy coast was another thing.

The planes were wing-to-wing, relying on sight to stay in formation. As soon as they got into the fog, “everything went black,” Rice said.

In the belly of another plane, 1st Lt. Bill Sefton of the 101st Airborne Division’s 501st Parachute Infantry Regiment was waiting for the signal to jump. He peered from the door of his C-47 at the ground below and saw fires burning. He yelled back to the men in the cargo bay, “Hey we’re in great shape. The Air Force has bombed the hell out of things.”

“A few minutes later, I began to realize those weren’t houses burning,” Sefton said. “Those were our airplanes.”

Friday marks the 70th anniversary of that frightening day, when 160,000 Allied troops landed on the coast of Normandy, most of them by sea, in an audacious assault that would lead to the fall of Nazi Germany. There were thousands of singular acts of bravery that day, and more than 4,400 Allied troops are known to have perished in the invasion.

As Allies gather this week to commemorate the biggest military invasion in history, the number of veterans left to tell their stories shrinks by the day.

“The invasion was just a part of it,” Rice said. “Of course, the next day you’re in carrying supplies to the men that you dropped. And then the day after that it was a workaday program of going in and supplying ammunition, medical supplies, food … and evacuating wounded.”

Sefton, an intelligence officer, dodged death twice in the opening days of Operation Overlord, as the invasion was named. His unit was scattered in the airborne assault. Ad-hoc units formed of men who stumbled across each other in the darkness.

“Seems like every 30 feet I’d find somebody else, and everyone of them had the same question, ‘What’s your plan?’ ” Sefton said. He told them, “Follow me.”

A mortar shell fell between him and two other men as they strategized in the dark. Sefton was knocked down, but unhurt. A day later, as he and three scouts searched for the rest of the unit, rounds from a German machine gun snapped by his face. He jumped into a pond to keep from getting gunned down. He hit the bottom and realized he didn’t have any air in his lungs.

“So I jumped up to the surface to get a big gulp of air, and as I went down the machine gun bursts went right across the top of my helmet.”

He made it out with the help of one of the scouts, Joe Newman.

“You know, this story could go on — does go on — forever,” Sefton said.

Two weeks later, Pvt. Wayne Kunkel came ashore at Omaha Beach with the 83rd Infantry Division. His outfit replaced elements of the 101st Airborne Division outside Carentan. Kunkel and a small band of infantrymen hunkered down behind a hedgerow 300 yards from the German front line in a forward observation post.

Normandy’s many hedgerows were obstacles the Americans had underestimated, giving cover and concealment to the Germans and stalling the Allied advance.

When the battle to break out of the hedgerows near Carentan kicked off on July 4, 1944, Kunkel was at the spearhead. After advancing about 25 yards into a farm field, he was pinned down for hours. He looked over to see one of his buddies with a bullet hole in his forehead.

Kunkel was wounded in the fight. After getting patched up, he went right back to it.

“I ended up being back in the first aid station at midnight on July 6,” he said. “I was apparently knocked unconscious, because I have no memory of how I got there or anything. And I have very little memory of my fighting in those couple days,” he said.

Kunkel’s fighting days were over. The war went on.

By early August, the Americans had broken out of the hedgerows and the 1st Infantry Division joined Lt. Gen. George S. Patton’s Third Army as it swept into Brittany.

The 30th Infantry Division relieved the 1st Infantry at Mortain, more than 50 miles south of Omaha, the bloodiest of the five invasion beaches.

When 1st Lt. Frank Towers landed at Omaha with the 30th on June 12, “we saw what virtually had happened in the preceding days, with ships being sunk along the coastline,” Towers said. “They had deceased bodies stacked up there ready to take back to England for burial,” and wounded men waiting to be evacuated on those same ships.

The 30th Division’s seminal battle would come at Mortain.

Within hours of the 30th settling in there, the Germans launched their Normandy counteroffensive, reclaimed Mortain and surrounded a battalion of the 30th Division atop a hill outside the city.

Towers and his platoon were west of the hill lobbing mortars into the fight. German tanks came within a few hundred yards of his position, fighting in vain to cut through the American lines. A week after recapturing Mortain, the Germans lost it again.

“From that point on the Germans were on the downhill side, heading back to Germany,” Towers said. “And we were chasing them just as fast as we could go.”

Two weeks later, Paris was liberated. By the end of August, the Germans had retreated to eastern France, Belgium, the Netherlands and over their own border.

Hoping to bring a quick end to the war, the Allies in mid-September launched Operation Market Garden. In a mission as bold as D-Day, more than 40,000 airborne troops landed behind German lines while two regular infantry divisions, an armored division and an armored brigade assaulted the front.

Sefton dropped into Veghel, Netherlands, with the 501st to capture key bridges, and landed in a farmer’s yard. The farmer came out and offered him apples. It’s a memory that still brings a smile to his face.

“Everywhere we went people were trying to give us apples, because that’s all they had to give us,” Sefton said.

With the Allies pushing into their homeland, the Germans were growing increasingly fearful of losing. In mid-December, they launched a major counterattack that would come to be known as the Battle of the Bulge. The German plan was to split and encircle the Allied armies and force them to negotiate a peace treaty. The Allies, while surprised by the attack, managed to hold.

That was Sefton’s third jump into combat — this time from the back of a truck into the Belgian town of Bastogne, which the 101st held despite being encircled by German armor.

“That’s where the expression originated, ‘They’ve got us surrounded, the poor bastards,’” Sefton said.

The siege of Bastogne is a well-told chapter of the battle. But hundreds of thousands of other troops also fought to keep the Germans from achieving their goal.

Towers and the 30th Division scrambled to Malmedy, Belgium, to stop the Germans from breaking through Allied lines.

“That killed two months right there for us,” Towers said.

The battle was the costliest of the war for the U.S., which suffered some 19,000 dead in six weeks of combat.

But by late January, the German offensive had failed and the Allies pushed over the Rhine. The 30th moved into the Ruhr Valley, a major German industrial region, and captured the city of Brunswick before moving onto Magdeburg, which fell in mid-April.

There, at the west bank of the Elbe River, the 30th stopped.

“That had been politically designed as the borderline between us and the Russians,” Towers said. “So we had to sit there and wait for them to come and move up in front of us.”

The 101st readied to drop into prison camps to prevent the Germans from slaughtering captives.

“It was a big relief in a way,” Towers said. “But in another sense it was not, because the 30th Division almost immediately had been prioritized to return to the States and go to the Pacific and to finish fighting the war down there.”

But the war in the Pacific ended before Towers had to deploy there. Like hundreds of thousands of American men and women deployed to the war, they returned to the U.S. to resume their normal lives.

Known as “The Greatest Generation,” many didn’t talk much about their experiences. With time distancing the modern world from the war, some are now opening up with stories they say they couldn’t forget, even if they wanted to.

Rice is back in Europe this week with one of his flying buddies from World War II, the 90-year-old Bill “Billy the Kid” Prindible. Rice said he got closure on the years he spent flying in the war years ago.

“I think a lot of us didn’t want to talk about it over the years. You know, we kind of wanted to forget,” Rice said. “But you can’t forget. It’s there in the back of your mind.”