WWII veterans search for parts of their past 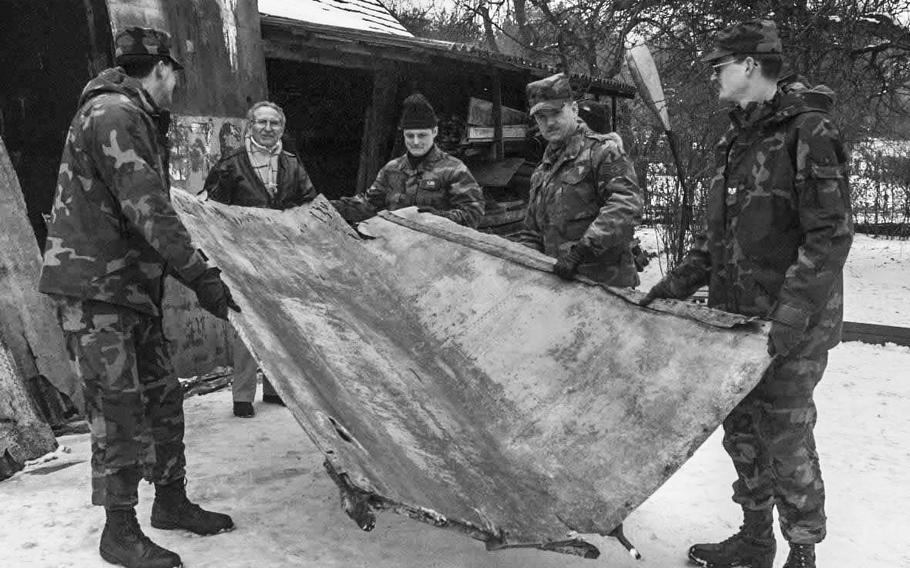 At Bad Muskau, Germany, in April, 1996, World War II pilot Dale Thornton, second from left, and airmen from Spangdahlem Air Base cart part of the tail section of Thornton's aircraft that was shot down at the end of the war to a nearby truck. (Ken George/Stars and Stripes)

Four Army Air force veterans returned recently to the German town of Bad Muskau on the Polish border to take care of a bit of business that began there 51 years ago.

The business was twofold. The first was to pick up the remains of their B-17 Flying Fortress aircraft shot from under them, and the second was to find the final resting place of a crew member who didn't survive the crash. It happened just six weeks before the end of World War II.

Navigator Leslie J. Tyler, pilot Dale Thornton, co-pilot Ted Narracci and radar navigator Stephen J. Stofko spent several days in Bad Muskau in March recovering a piece of their plane's stabilizer (which had become part of a farm building), listening to eye-witness accounts of their crash and trying to find the grave site of their gunner, 1st Sgt Sator Sierra Sanchez, called "Sandy." They were accompanied by former Capt. Brian McPeek, who helped organize the recovery assistance with the Air Force, plus nine Air Force crash recovery specialists from the 52nd Fighter Wing stationed at Spangdahlem Air Base.

During World War II, the Germans had developed a method of producing synthetic fuel which had already prolonged the war, The wing of the 15th Air Force to which the men belonged was stationed just east of Luccera near Foggia in the "heel" of Italy's boot.

The mission was to destroy the German fuel sources and to help the Russian army drive back the Germans on the eastern front.

The Germans had several sites where they were producing synthetic fuel. The last of them was in the town of Rhuland just south of Berlin.

It was to be the longest mission ever attempted by bombers during the five years of war in Europe — 700 nautical miles one way.

The planes on the mission, all B-17s because they were the only bombers capable of coping with the distance, were carrying full bomb loads — a dozen 500-pounders. They flew a mite lower than usual, at 25,000 feet in order to stretch their mileage.

In his book, Wild Blue Yonder, Tyler wrote how excited he was about participating in this history-making mission.

They then flew over former targets at Graz and Wiener Neustadt in Austria and over the Austrian Alps into Czechoslovakia, passing Prague and entering Germany. They flew over Dresden, still smoldering from the British Royal Air Force's attack a few weeks earlier.

As they approached the city of Bautzen and then Rhuland, the crew donned flak suits in anticipation of anti-aircraft fire.

Tyler said he was just adjusting his equipment in preparation for the bombing when the plane was hit.

"I looked out the window and saw great streams of black oil gushing out and over the cowling. But I didn't know it was mortal for the plane at first. I knew the plane could fly on three engines." he recalled.

Thornton headed the plane north toward Cottbus and gave orders to jettison the bombs because the plane was losing altitude. He told Tyler to look for the nearest emergency landing field. He shouted at the crew that they would be over Russian-held territory in five minutes.

Thornton remembered, "When the engine caught fire and we rapidly began losing altitude and control, I said, 'Let's get out of this goddamn thing,' and pulled the bailout bell.

"We were at 1,800 feet and it was surprisingly quiet all around us. I turned to get out and there was an explosion that knocked me out the door. The burst even opened my chute and I lost my shoes.

"I didn't see Sanchez while I went for the door, so I thought he must have already bailed out We never saw him again."

Sanchez was the only one of the 10-man crew who didn't make it safely out of the aircraft. The men have two theories about him: Either he didn't have his chute on and couldn't get out, or he decided to stay at his gun and rode the wreckage to the ground.

Unfortunately, the men didn't make it to the Russian lines.

Herbert Werner said he remembers that day well. Werner, a former German soldier, sat in the dining room of the Park Stadt Hotel in Bad Muskau.

The veterans listened intently to his narration of the events of the day that they can never forget.

"I was stationed at the Neisse at Bad Muskau with Army Regiment 1085 2nd Battalion of the 446th Division of the Volksgrenadier — the last men and boys left to draft for front duty.

"The Red army was only a few miles away across the river. I saw the American plane overhead break into two pieces and the chutes coming down. The last ones out landed across the river, which is Poland today.

"One landed in a tree with his chute and I captured him. Had he landed 400 meters more to the east he would have had borscht for dinner."

Stofko looked at Werner in amazement "That was me!" And for a brief moment while the two men gazed intently at each other, 51 years disappeared as astonishment and a kind of bonding seemed to replace the simple interest the two had shared just an instant before.

The men shook hands and the 72-year-old Stofko said, "Thank you" while the 68-year-old Werner, kept bobbing his head in affirmation. An outsider could not quite understand either reaction.

Gunter Rotter another member of the Volksgrenadier division was 17 at the time ihe American plane came crashing to earth.

"When I saw the Americans bailing out I high-tailed to the first one I saw land to capture him — because of the cigarettes/' he laughed. But he couldn't recall which American he had captured a half-century ago.

Quickly captured, the crew went through a series of interrogations and were marched westward, going from one camp to the next as the Russians moved closer.

Their ordeal ended 45 days later, Tyler said, when Gen. George Patton himself came into their camp, called them heroes and announced their liberation from Stalag Luft VI-A near the village of Moosburg in Bavaria,

"On that same day," Tyler said, "Hitler put a bullet in his head in Berlin, ft was all over."

Unfortunately, the Germans were not able to tell Americans the exact site of Sanchez' grave. During their search for the grave, the men were told he was found dead in a sitting position leaning against a tree on the property of a family called Hoffmann.

"The woman who found him is dead but people say the Hoffmanns buried him on their property," Stofko explained.

A frau Schubert, Stofko said, told them she remembered that in the 1980s four men were detailed to pick up the bodies buried in the area and take them away to a cemetery. Townspeople claimed there were some 200 graves scattered about the area.

"We assume Sanchez was taken to one of the cemeteries in the area and buried there in an unmarked grave," Stofko said.

Sanchez was a hero in everyone's book. He was one of the most highly decorated airman of World War II. He had flown a record 66 missions and had earned a chestful of medals. He served from. 1939 to 1945, participating on two combat tours with the 8th and the 15th U.S. Army Air Forces.

A tailgunner, he was credited with destroying six German fighters. He earned the Silver Star, Distinguished Flying Cross, Soldiers Medal, Air Medal with 12 oak leaf clusters, two Purple Hearts and a number of other citations.

He is the only airman to have a B-17 named after him.

After having earned the return to the home front after 44 combat missions, he managed to return to the 15th Air Force in Italy where he completed another 22 missions.

"He was a legend when he joined our crew, but was a very modest man," Stofko said.

Standing in front of the piece of the tail of their old airplane, nailed to the side of a farm shed owned by Ernst Kollar in the outskirts of Bad Muskau, Thornton recalled again how he had gotten out of the plane.

Stofko became uncommonly silent and said, "It's too emotional right now to talk."

Their Bad Muskau mission partially completed, the veterans had the remains of their plane taken to the U.S. Air Force Museum in Dayton, Ohio.

While they didn't find Sanchez's grave, this gathering of old men had briefly revived an episode in history that had left no one in the region untouched. They were briefly the talk of the town — just as they had been when they came tumbling out of the sky ~ and once again they had deported themselves admirably.