WWII veteran gets Silver Star in official ceremony at Yokota 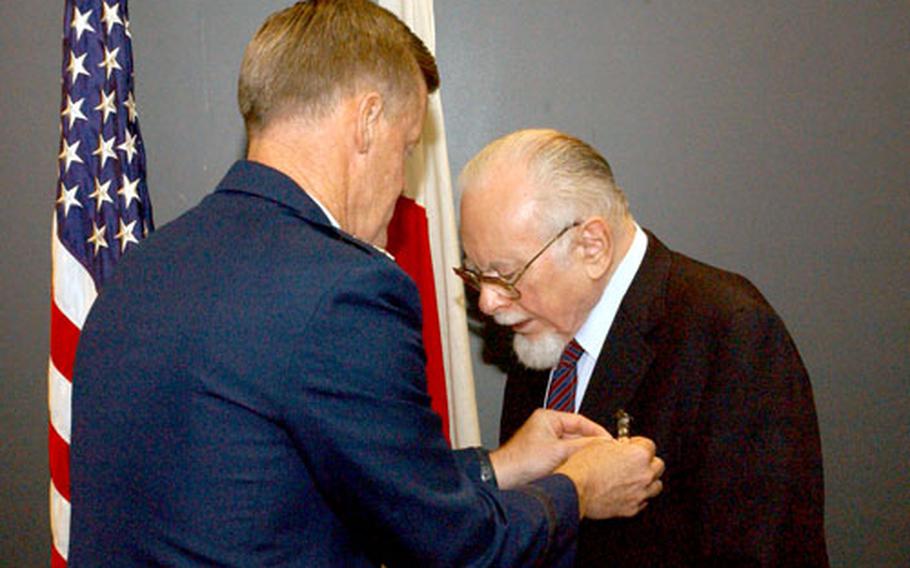 The former B-17 bombardier, now 82, earned the Silver Star for gallantry in action over German-occupied northern Italy during World War II.

In 1950, Foster received the medal in the mail.

But like many veterans who quickly demobilized after the Allied victory, he never had an official ceremony in his honor.

That changed Oct. 14 when Lt. Gen. Bruce Wright, commander of U.S. Forces Japan and the 5th Air Force, presented Foster the original Silver Star and certificate signed by Stuart Symington &#8212; first Secretary of the Air Force &#8212; during a commanders conference at Yokota.

Toward the end of his career he was assigned to Fuchu Air Station near Tokyo, former home of 5th Air Force Headquarters, where he managed base exchanges at 12 military installations.

When anti-aircraft fire hit several planes in a formation headed for Villa Orba, Foster suffered shrapnel wounds to his right thigh and both legs about 20 minutes from the target area.

Despite increasing numbness in both limbs, he continued to operate his machine guns.

When the B-17 was over its target, he dragged himself into position and released his arsenal.

He then returned to his guns and continued firing until the aircraft was five minutes past the drop zone.

Only then did he apply a tourniquet and inject morphine into his arm to ease the pain.

After recuperating from his wounds, he returned to flight status and took part in five more successful bombing missions.

Germans captured him shortly after he parachuted to the ground.

But when U.S. forces advanced into Germany, he used a bluff to be among the first prisoners to gain freedom.

On April 18, 1945, his captors were marching prisoners out to evade U.S. and Russian soldiers closing in. Pretending to be immobile, Foster and another American were abandoned at the Nuremberg prison.