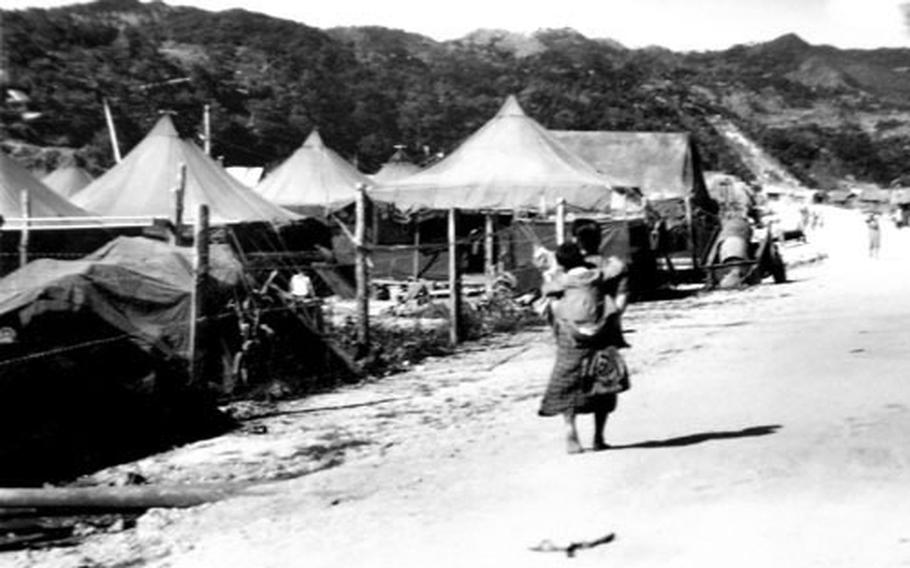 A barefoot mother carries her child past rows of refugee tents on Okinawa in 1945. The photo is one of a box full of photographs donated to an Okinawa historical society by American veteran Robert Rock. (Photo by Robert Rock)

A barefoot mother carries her child past rows of refugee tents on Okinawa in 1945. The photo is one of a box full of photographs donated to an Okinawa historical society by American veteran Robert Rock. (Photo by Robert Rock) 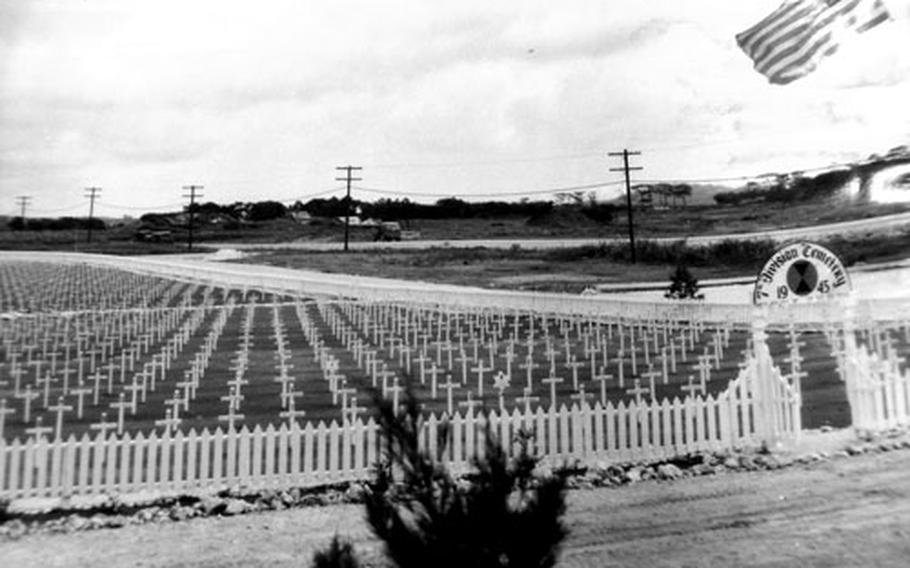 The Army’s 7th Infantry Division Cemetery located in the Isa district of Ginowan, near what is now Camp Foster, in 1946. (Photo by Robert Rock) 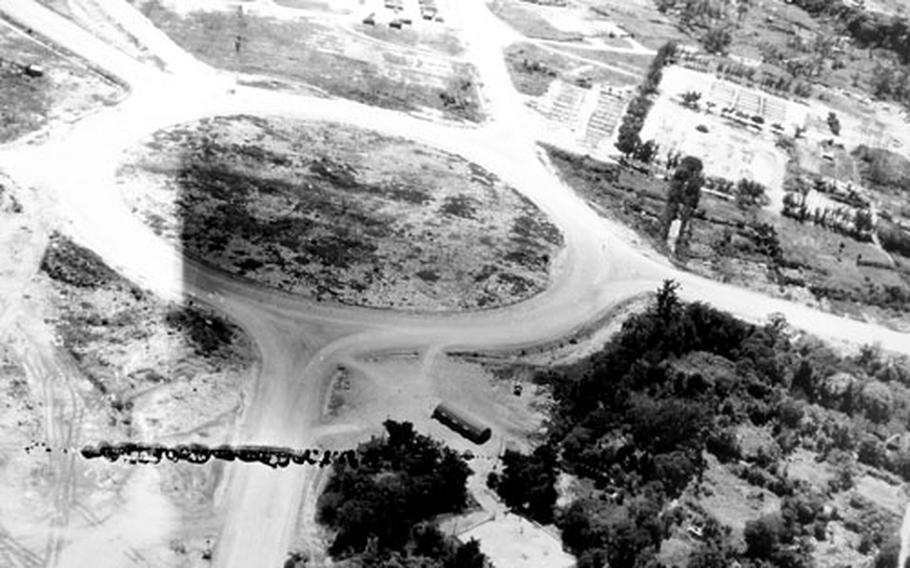 A traffic circle is constructed near what is now Kadena Air Base in 1945, when Okinawa was built up as a staging area for the invasion of the Japan mainland. Kadena Circle is now a thriving shopping district. (Photo by Robert Rock) 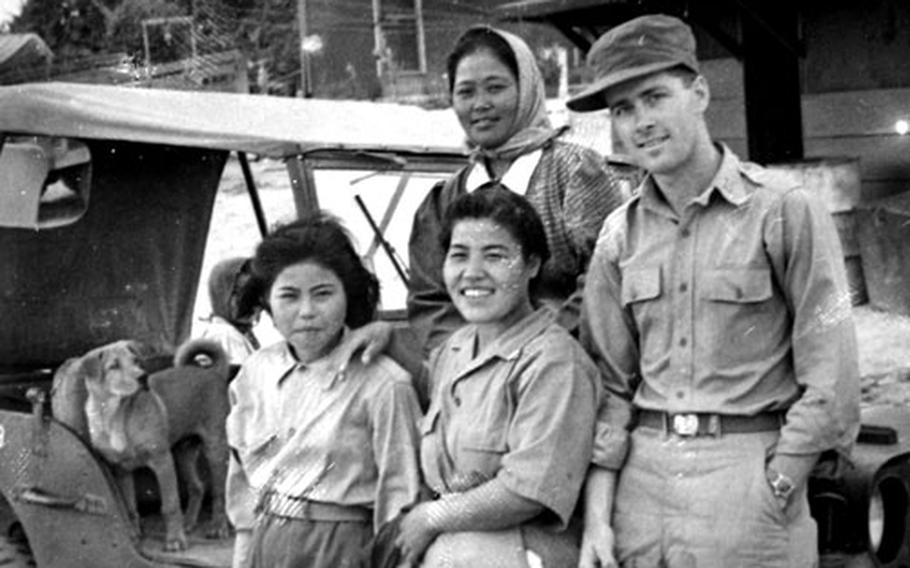 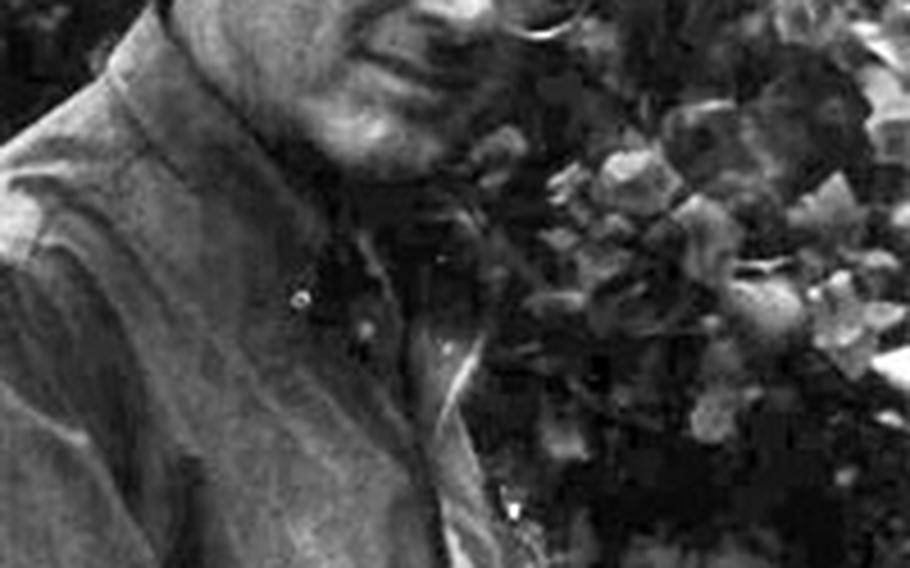 KITANAKAGUSUKU, Okinawa &#8212; Robert Rock&#8217;s gift to Okinawa this holiday season is a box of photographs of an island lost to time, in the early days of its struggle to rise from the ashes of war.

They are images of his youth, when as a 23-year-old first lieutenant with the 10th Army Corps of Engineers, he landed with the American invasion force on April 1, 1945, and remained through November 1946, frequently taking photos from the air in a single engine reconnaissance plane.

Rock, now 84, of Redding, Calif., donated more than 170 photographs to the Ryukyu America Historical Research Society, which will post them to its Web site (http://www.ryubei.com/english/index.html) next month.

The pictures show an Okinawa decimated by an 80-day battle that claimed at least 200,000 lives, most of them Okinawa civilians caught in the storm that came to be known as the &#8220;Typhoon of Steel.&#8221; And they show the massive preparations made for the planned invasion of the Japanese mainland, which was made unnecessary by the dropping of the atomic bombs at Hiroshima and Nagasaki in August 1945.

They are poignant pictures of a baby piggybacked on her distraught mother who is walking down a dusty lane lined with refugee tents and hundreds of white crosses marking graves at the Army 7th Infantry Division&#8217;s cemetery, near what is now Camp Foster.

&#8220;All of these photographs and documents are very precious,&#8221; said Shizuo &#8220;Alex&#8221; Kishaba, director of the Ryukyu American Historical Society. &#8220;These aerial photos, which were taken from very low altitudes, will significantly help us to learn more about Okinawa&#8217;s cultural assets and historical architecture that once flourished here.&#8221;

The society, a nonprofit organization, has been active in collecting photographs and documents of prewar and postwar Okinawa, as well as restoring treasures and cultural assets that were lost in the war. So far, they have obtained about 1,800 to 2,000 photographs from Americans who served on Okinawa.

Kishaba said Rock&#8217;s collection was one of the best.

&#8220;I donated these photos so both the military and civilian people could see what the island looked like years ago,&#8221; Rock said in an e-mail to Stars and Stripes.

&#8220;Especially for young Okinawans, who I understand are losing their appreciation of their culture. I also find it exciting to provide a reminder to the old folks &#8212; of scenes perhaps familiar to them.

&#8220;But a selfish reason was to make my name known as a person who loves the island, respects its people and supports its independence and preservation of a way of life that can benefit the world with its arts, sciences, beauty, sincerity, peacefulness, and lack of militaristic aggression.&#8221;

After the war, Rock worked for the U.S. Environmental Protection Agency and as a consultant for environmental groups. He is the author of a collection of biographical essays, &#8220;From There to Here,&#8221; which contains several chapters on his time spent on Okinawa. He last visited Okinawa in 2003 and was struck by the change from the rural war-torn island he knew to the bustle of the current day. He said he recognized little of what he saw in his &#8220;old stomping grounds.&#8221;

&#8220;I was disappointed by the miles of concrete buildings all along the thoroughfares, such a departure from the former beauty of the old architecture,&#8221; he said of southern Okinawa. But in the north, much of the old Okinawa was still apparent.

And the open friendliness of the people had not changed, he said.

He said he hoped some of the pictures would express the love he developed for Okinawa during and immediately after the war.

&#8220;The beauty of the northern areas and the total devastation of Naha and Shuri &#8212; shocking! The foreignness &#8212; everything was different from the States. The beauty of the homes and villages, especially the honeycomb-like villages where homes were crowded together with trees and shrubs around each one as protection against the typhoons.&#8221;

Those are the things he said he can never forget.