Buy Photo
World War II veteran Jesse Baltazar salutes, as his wife, Margrit, stands beside him during a ceremony at Joint Base Myer-Henderson Hall, Va., where he received the Purple Heart from Army chief of staff Gen. Ray Odierno on Tuesday, Jan. 20, 2015. (Jon Harper/Stars and Stripes)

Buy Photo
World War II veteran Jesse Baltazar salutes, as his wife, Margrit, stands beside him during a ceremony at Joint Base Myer-Henderson Hall, Va., where he received the Purple Heart from Army chief of staff Gen. Ray Odierno on Tuesday, Jan. 20, 2015. (Jon Harper/Stars and Stripes) 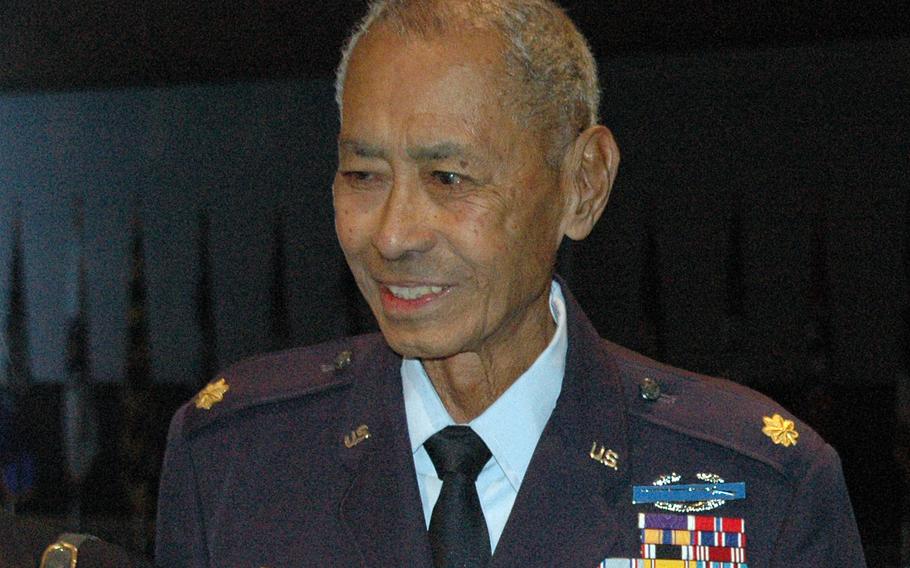 WASHINGTON — Former soldier and airman Jesse Baltazar received the Purple Heart on Tuesday, more than 70 years after he was wounded in action in the Philippines and forced to participate in the infamous Bataan Death March.

Baltazar joined the U.S. Armed Forces Far East, also known as USAFFE, in 1941 after the Japanese bombed Pearl Harbor and threatened to invade his native Philippines. The Philippines was a U.S. territory at the time.

“The war broke out and … they needed men,” Baltazar told reporters when asked why he chose to join the U.S. military.

Baltazar “answered the call to arms when the homeland was attacked,” Army chief of staff Gen. Ray Odierno told attendees at the award ceremony at Joint Base Myer-Henderson Hall, Va.

Baltazar, a member of the Army’s 71st battalion, was wounded in the leg by shrapnel when Japanese planes bombed his camp on March 15, 1942. Because facilities and supplies were limited, he had to undergo surgery in the jungle, with little anesthesia.

A few weeks later, U.S. and Filipino troops on the Bataan peninsula were forced to surrender when the Japanese took over the Philippines after months of fighting.

The Imperial Japanese Army forced their prisoners to march 60 miles. The POWs were subjected to physical abuse and disease, and many died. The event became known as “the Bataan Death March.”

Still recovering from his wounds, Baltazar was forced to use a bamboo stick as a cane when the march began. Three days into the ordeal, he managed to escape, hiding on a fishing boat until he was able to return home.

Baltazar later joined the Filipino resistance movement, which waged a guerrilla war against Japanese troops until American forces returned to liberate the islands in late 1944.

Despite being wounded in action, Baltazar was not awarded the Purple Heart at the time because the Army lost some of his records. Over the past two years, his family and other supporters helped him reconstitute his records and campaigned for him to receive the medal. Secretary of State John Kerry, a Vietnam veteran, lent his weight to the effort, according to Baltazar.

“This award is 70 years overdue,” Odierno said. “It’s important for all of us who have worn the uniform of the United States Army [to] ensure that those who have earned awards through their service be recognized, especially those who have served with distinction and sacrificed selflessly for this great nation of ours.”

Baltazar’s wife and five children were on hand to see him finally get the recognition he earned.

“We have heard these stories of how he was wounded, since we were little children,” Baltazar’s son, Thomas, told reporters. “And really the question came up a couple years ago [when Jesse Baltazar was writing a book about his service]: where’s the Purple Heart? ... And through a series of events we come to this day, and it’s fantastic for our family.”

“I’m very grateful that finally I got it, and that all the members of my family were here today to witness it,” he told reporters. “I’m sure they’ll never forget it, and they can pass [the story and the medal] on to the next generation.”

Baltazar’s career in public service didn’t end after World War II. After he was discharged from the Army, he moved to the United States and received an Air Force commission in 1948, becoming the first native-born Filipino to join that service.

He served in the Korean War as part of the Air Force Office of Special Investigations, and later retired at the rank of major.

After he left the military, Baltazar joined the U.S. State Department, and served as a deputy provincial adviser in Vietnam from 1966 to 1970.

He retired from the State Department in 1988, but later returned as a contractor.

“It’s a story of valor and courage. A story of an American patriot, soldier, airman and diplomat,” Odierno said when reflecting on Baltazar’s decades of public service.

Thomas Baltazar, 57, followed in his father’s footsteps, and served in the U.S. Army for 26 years before retiring at the rank of colonel.

“He’s my role model,” the younger Baltazar said. “We are all about service [in my family], and it’s because of [Jesse].”

Jesse Baltazar, 94, was asked the secret to his longevity.

“Eat a lot of vegetables,” he joked.