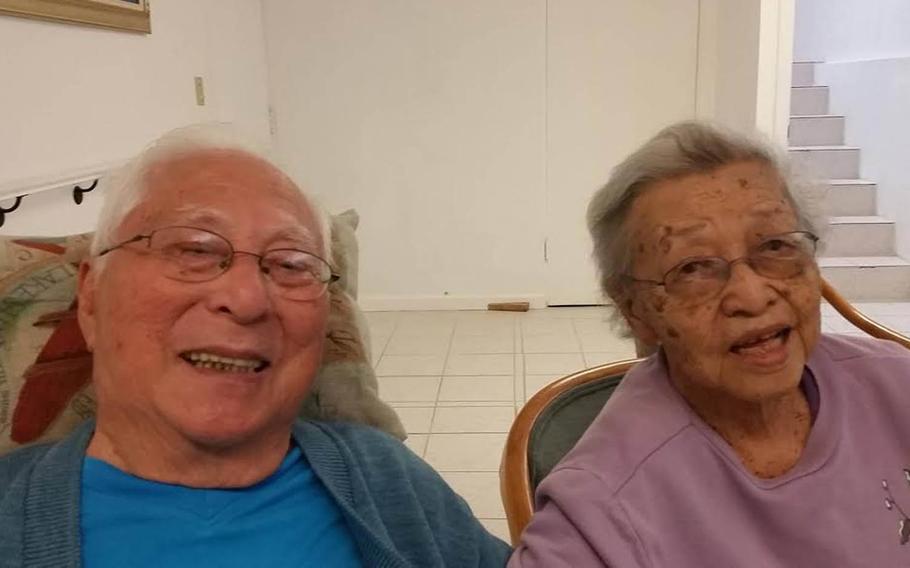 Noboru and Elaine Kawamoto pose in this undated photo. The couple, married for 68 years, have seen each other only every couple of weeks the past two years because Hawaii state rules don't allow them to live together in Noboru's nursing home. (Courtesy of the Kawamoto family)

Noboru and Elaine Kawamoto pose in this undated photo. The couple, married for 68 years, have seen each other only every couple of weeks the past two years because Hawaii state rules don't allow them to live together in Noboru's nursing home. (Courtesy of the Kawamoto family) 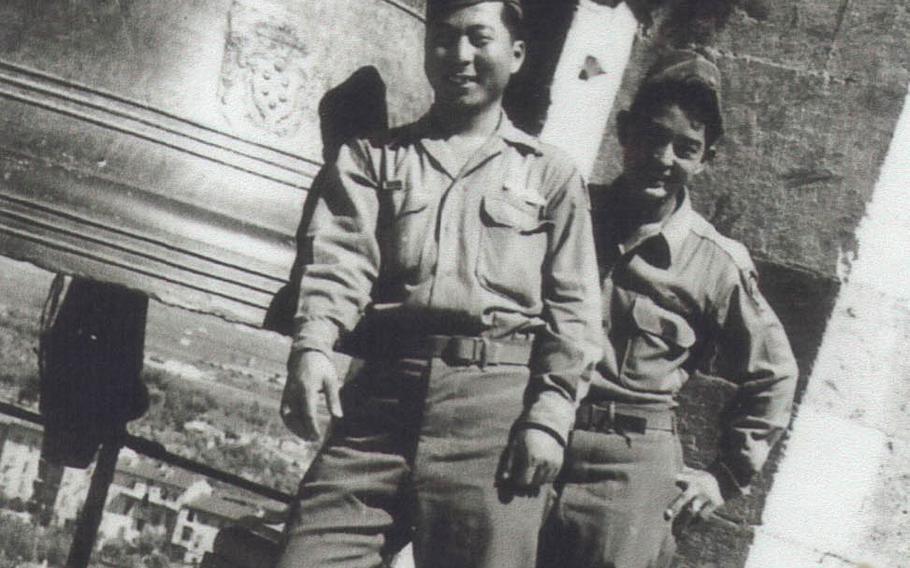 Noboru Kawamoto stands in 1945 next to a bell in the city of Pisa, Italy, where he served with the 442nd Regimental Combat Team during World War II. (Courtesy of the Kawamoto family)

FORT SHAFTER, Hawaii — A 95-year-old World War II veteran of the famed Japanese-American 442nd Regimental Combat Team is suing the state of Hawaii for not allowing his wife to live with him in his nursing home.

The lawsuit argues that a Hawaii state law preventing their cohabitation due to Medicaid regulations is unconstitutional under the Fourteenth Amendment, which guarantees equal protection.

Ige had not yet seen the lawsuit and therefore could not comment, said spokesperson Cindy McMillan. The lawsuit will be reviewed by the attorney general, who will advise the governor on the best course of action, she said.

The couple had been in an assisted-living facility on Oahu until August 2014, when a series of infections forced Noboru to be hospitalized for several months, after which he required a high degree of care. Meanwhile, worsening health had forced Elaine into nursing care, according Jeffrey Portnoy, an attorney with Cades Schutte, the law firm representing the couple.

After his hospital stay, Noboru had no option but to enter a community care foster home, which is a type of nursing care facility with two to three beds that provides 24-hour care to resident patients. It was the only nearby nursing facility equipped to take Noboru, Portnoy said.

In many cases, care provided in community care foster homes is paid for by Medicaid, a joint federal-state program that helps pay medical costs for people with very limited means.

Noboru, however, was paying for his own care and not using Medicaid.

But Hawaii law allows only one non-Medicaid resident in a community care foster home, which meant that Elaine — also not using Medicaid — was not allowed to live in the same home.

The couple, married 68 years, have only been able to see each other for brief visits every few weeks, Portnoy said. They’ve not spent a night under the same roof for almost two years, he said.

In essence, the law bars all non-Medicaid couples from living together if one or both requires the level of care offered by community care foster family homes.

Paradoxically, state statutes recognize the right of Medicaid patients to live together with their spouses, according to the complaint.

“My father fought for our country during World War II, and now he is fighting again for the right to live with my mother during the final years of their lives,” Norman Kawamoto said in a statement released by the law firm. “Not only is it unconstitutional that he and my mother are separated now — after decades of living together as loving spouses, parents, grandparents and great-grandparents — it’s heartbreaking and cruel.”

The roughly 14,000 men who served in the 442nd were highly decorated — and oft wounded. Nearly 9,500 received Purple Hearts; 25 were awarded Medals of Honor.

The 442nd Veterans Club has attempted to amend the law in the past, pushing the Hawaii State Legislature to pass a bill last year that would have let private-pay couples live together in community care foster family homes.

The Health Department and Human Services Department, which are both named as defendants in the lawsuit, opposed the bill, and earlier this year it died in conference.

In an April 4 letter to the legislature, the heads of those departments wrote that there was no need for the amendment because “there is no law preventing the Kawamotos from living together. Like other couples who can afford private-pay care, there are multiple options for residing in the same or similar kind of residential care home.”

The letter suggested that the couple could live in one of the 30 so-called expanded-adult residential care homes on Oahu or that the operator of the Noboru’s facility could apply for a change of licensing.

The agency heads wrote that the intent of the restriction affecting Kawamotos was to preserve beds for Medicaid residents.

The lawsuit argues that the supply of such beds far exceeds the demand, citing the Health Department’s statistics that as of June 1 there were 221 vacant beds in community care foster family homes statewide.