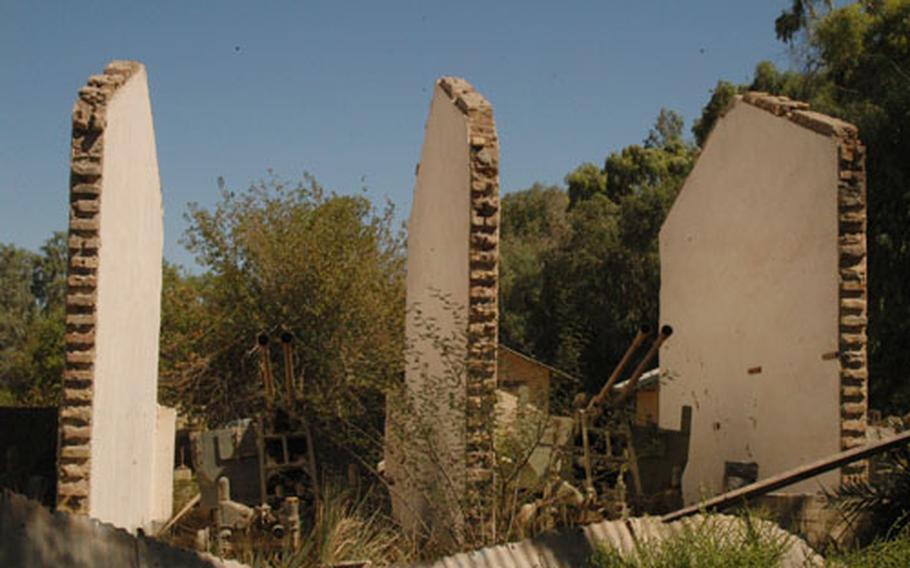 The houses and barracks close to the airstrip at Camp Habbaniyah, Iraq, are full of aircraft parts that Iraqis tried to hide from Coalition bombers last year. (Seth Robson / S&S) 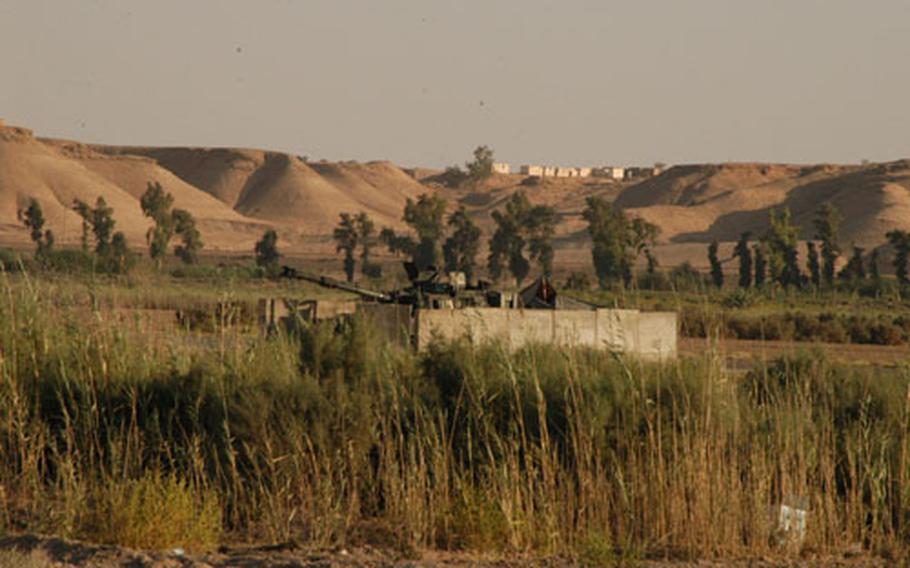 Camp Habbaniyah, Iraq, is an oasis of green surrounded by a desert. (Seth Robson / S&S) 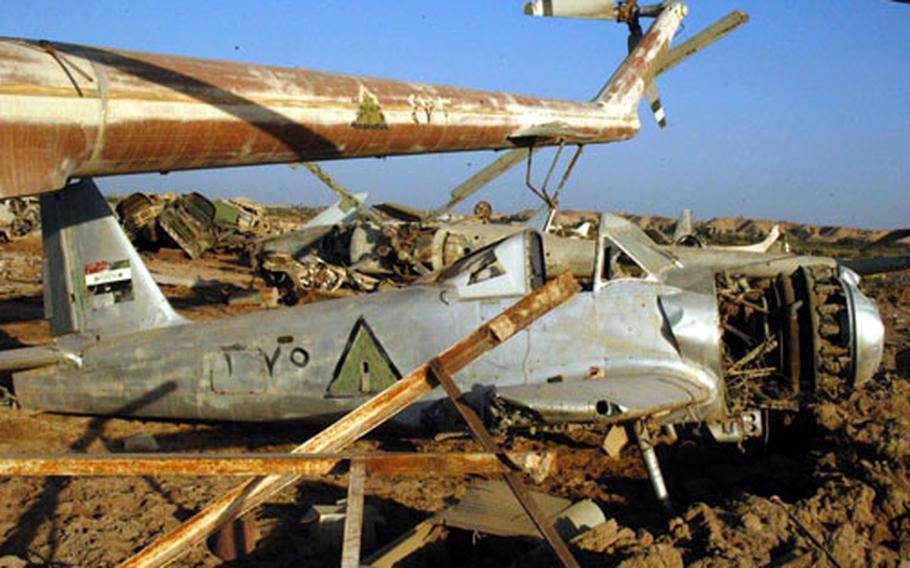 The aircraft graveyard at Camp Habbaniyah, Iraq, has all sorts of machines, including this single-engine prop plane flanked by a pair of helicopters. (Seth Robson / S&S)

CAMP HABBANIYAH, Iraq &#8212; Second Infantry Division soldiers living at this sprawling base west of Baghdad could be excused for imagining they are fighting one of yesterday&#8217;s wars.

The base is made up of hundreds of slant-roofed, brick hangars, barracks and houses built by the United Kingdom in the 1930s, when it was the British Empire&#8217;s most important military base in Iraq.

The U.S. soldiers now here, from the 2nd Infantry Division&#8217;s 2nd Brigade Combat Team (Strike Force), eat in a building that was once an air force mechanics&#8217; workshop. The building has its original circa-1930 metal sliding doors, ceiling and light fixtures, giving chow a distinctly World War II flavor.

It seems appropriate, since Habbaniyah was the site of one of the most important &#8212; but little known &#8212; battles of World War II. In May 1941, the Iraqi army and air force, which had allied with Germany, besieged the base in an effort to cut off Iraq&#8217;s supply of oil to the Allies.

According to habbaniya.org, the British were outnumbered and outgunned, but destroyed the Iraqi air force, mostly on the ground, then bombed the surrounding Iraqi guns and tanks until they were no longer a threat.

The RAF maintained a presence at Habbaniyah until 1959, when it was forced to leave after the Iraqi revolution of 1958. Today, several WWII-era British guns still stand at the base.

There are plenty of reminders of the former British presence at Camp Habbaniyah, known as Junction City by 1st Infantry Division soldiers who lived there earlier this year. The most obvious legacies are the thousands of trees and plants that make the base an oasis of green surrounded by an inhospitable and seemingly limitless expanse of desert.

A walk around the camp reveals that much of the British infrastructure was used by the Iraqis until they were driven out by last year&#8217;s invasion by the coalition.

Everywhere you look, there are antique vehicles and machinery. The old telephone exchange, now a jumble of tangled wires, is where local fishermen store a pair of wooden canoes. And rusting red buckets hang among the cobwebs in the old fire station.

The two movie theaters, one indoor and one outdoor, were once able to cater to hundreds of patrons. The seats from the indoor theater have been kicked over and broken and tall trees have grown up in front of the outdoor projection booth, where a pair of projectors still stand. The walls of the indoor theater are decorated with murals depicting the prowess of the Iraqi military and the death of the ruler of Iran, his head tattooed with a Star of David as he sinks into a hole in the ground.

Nearby, the Anglican Church has been converted into a mosque and the British servicemembers&#8217; cemetery, which includes numerous WWII graves, has been vandalized to obliterate Christian symbols.

There are literally hundreds, if not thousands of buildings at Camp Habbaniyah and most of them are vacant.

Inside one, paperwork lies scattered on the floor &#8212; photographs of Iraqi air force officers and notebooks filled with Arabic script. In other rooms, retreating Iraqi airmen and soldiers had hastily stripped off their uniforms: shirts, pants, gas masks, and helmets litter the floor.

Other buildings are packed with thousands of gray wooden crates containing unused aircraft parts including wheels, glass canopies, jet engines, flight suits, radios and various other items. There are larger wooden crates, some the size of rail cars, containing jet engines. One has a pair of wings inside it.

There are eight large hangars along the airstrip, each the size of a football field. The Army is using them to store M1A1 Abrams tanks, Bradley fighting vehicles and Humvees. The old control tower, still standing midway up the runway, is now a company headquarters.

Several Iraqis who worked at the base before the Americans took over are now employed by the U.S. Army. Ali Gabar, who serves food in the mess hall and is in training to become a doctor, said he used to clean Saddam Hussein&#8217;s house at Camp Habbaniyah before the war.

Gabar remembers when water trucks would drive around the base irrigating the plants on the side of the road, then drive around the soccer field to water the pitch, which was covered in grass. The young man used to play soccer there every day with Iraqi air force officers, he said.

The road to Saddam&#8217;s house is marked by a traffic island with a pink-blossomed bush and an attractive light stand in the middle of it. Halfway up the street stands a pair of stone lions with missing heads. The lions flank a stone path leading into a small park with fountains, a goldfish pond, grape vines and numerous unusual trees and shrubs.

Saddam&#8217;s house, at the end of the street, is a two-story mansion with a large Iraqi flag painted above the front door. Inside, there are two courtyards and dozens of rooms.

Before the war, the house was filled with fine furniture, televisions and all sorts of items, but they were removed by the fleeing inhabitants as the Americans approached, Gabar said, standing in a room littered with smashed glass and broken masonry.