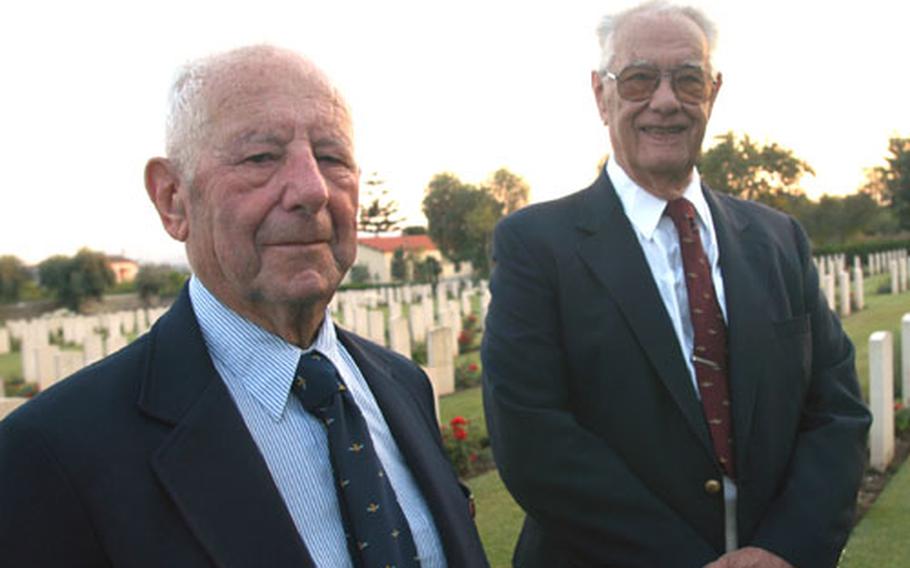 SYRACUSE, Sicily &#8212; Howard Johnson sat in the co-pilot seat of the fabric-covered wood and metal glider, scanning the night sky for Sicily&#8217;s beaches.

Johnson was in one of 140 gliders hooked to tow planes that left Tunisia for Axis-held Sicily. Enemy fire and searchlights lit up the sky.

The glider crashed into the sea, 100 yards from what Johnson thought was a beach.

Johnson and another U.S. Army Air Force glider pilot, Sam Fine, 90, returned to Sicily last week for the 60th anniversary of the invasion. At a memorial Wednesday at the Syracuse war cemetery, they joined British veterans and young troops from the 1st Battalion King&#8217;s Own Royal Border Regiment from Cyprus.

The two Americans walked around the cemetery and reminisced about their role as volunteer co-pilots with the British army. They were among 6,000 troops who trained as pilots in the engineless aircraft, which could carry 13 troops and their equipment or even a jeep while relying only on the wind.

On July 9 and 10, 1943, about 160,000 Commonwealth and U.S. troops invaded Sicily. Part of that force involved airborne troops in 48-foot-long gliders in an operation called Ladbroke.

Enemy fire and gale-force winds forced 60 of the 140 gliders into the sea.

They cut loose around midnight. Using a cigarette lighter, Wickner read the altitude and airspeed. To avoid a stone wall, Fine hooked the left wing into a tree, bringing the aircraft to a halt.

Within moments, the pilots and 15 airborne troops came under fire. Fine said he was hit twice in the back of the neck, &#8220;just flesh wounds.&#8221;

The enemy retreated, and the group headed for a bridge in Syracuse, where Italian troops attacked them again.

One of those killed was Wickner. Fine stood at his grave Wednesday, head bowed and hand over his heart.

Fine was a prisoner for only an hour or two. His group came upon a British ground force, which scared away the guards with their fire. Fine grabbed the guards&#8217; weapons as they fled.

Johnson, whose glider landed in the sea, swam with the other troops to land. Enemy fire pinned them down all night as they took cover in rocks in a breakwater.

He and the pilot came upon an Italian barracks.

Both Fine, who was in the military for 3&#189; years and received a Purple Heart, and Johnson left the armed services as first lieutenants. Fine entered the egg-distribution business in his home state of New York, while Johnson, a Worcester, Mass., native, worked in metallurgy sales.

WWII gliders at a glance

The CG-4A was not designed to be a thing of beauty, and Air Force power pilots joked about its ungainly appearance, but few of them poked fun remarks at the guys who flew them, according to the National World War II Glider Pilots Association Inc.