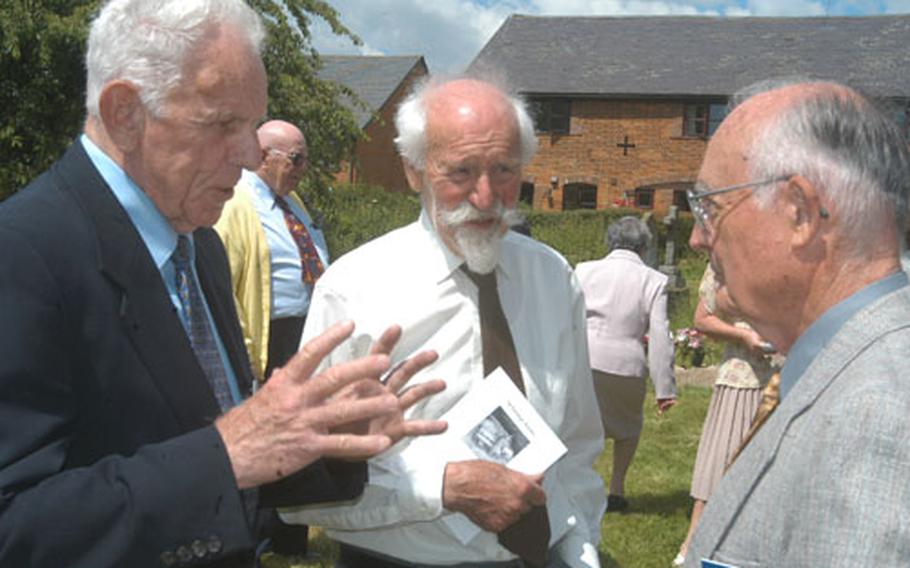 Keith Anderson, left, and Russell Reed, right, former B-17 pilots with the 398th Bomb Group, talk about flying with Mike Graty, center, who flew Lancaster bombers for the Royal Air Force during World War II. The three men talked after a service of thanksgiving at St. George&#39;s Church in Anstey, England, honoring the men of the 398th who died in the war. (Ron Jensen / S&S)

Keith Anderson, left, and Russell Reed, right, former B-17 pilots with the 398th Bomb Group, talk about flying with Mike Graty, center, who flew Lancaster bombers for the Royal Air Force during World War II. The three men talked after a service of thanksgiving at St. George&#39;s Church in Anstey, England, honoring the men of the 398th who died in the war. (Ron Jensen / S&S) 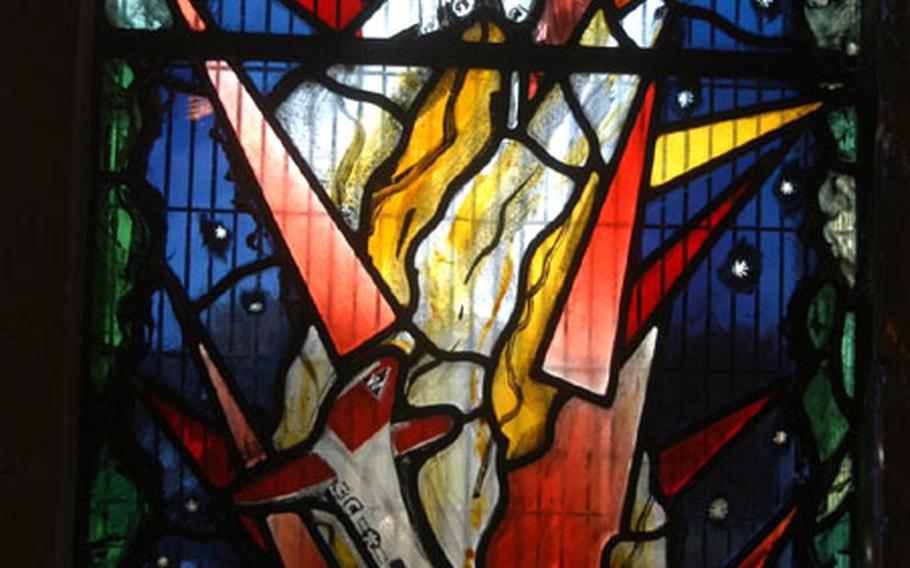 A detail from a stained glass window in St. George&#39;s Church, Anstey, England, shows a B-17 Flying Fortress. The window is dedicated to the men of the 398th Bomb Group who lost their lives flying for a nearby base during World War II. (Ron Jensen / S&S)

ANSTEY, England &#8212; The church is nearly 1,000 years old. And one of the bells that rang out across the English countryside on Sunday&#8217;s bright and pleasant morning was cast in 1490.

But the 200 worshipers inside St. George&#8217;s Church in Anstey, including nearly 40 Americans, were honoring the sacrifice of men who perished a mere six decades ago.

The honored dead were members of the 398th Bomb Group, which flew from a base barely two miles away during World War II. And about a dozen of the American visitors crammed between the church&#8217;s ancient pillars and arches were their colleagues.

&#8220;We remember with gratitude those who gave their lives in the name of freedom,&#8221; said the Rev. Carol Kimberly in a prayer during the service of thanksgiving.

A window in the church, installed in 2000 by funds raised by the veterans association and friends, is a memorial to those who died.

But this was more than a service to remember the fallen. This was one of the final stops for the veterans and their family members on a two-week tour that has been billed as &#8220;One Last Look.&#8221; They attended D-Day anniversary ceremonies in France last weekend and have toured part of England since then, including a memorial ceremony at the site of their former base.

It may be the final time some of the Americans and their British friends gather. The 398th veterans have been religious about returning, with formal reunions happening nearly every other year for 20 years or so.

In that time, friendships began in wartime have strengthened and new ones have sprouted. Some veterans and their wives have been made godfathers to British children.

The reunion theme was selected two years ago by Allen Ostrom, a former B-17 tail gunner and a trip organizer.

Marshall Zinter, 83, a former pilot from Rochester, N.Y., was making his fourth trip back to England. Three generations of his family were with him.

This talk of no future visits by the Yanks brought tears to the eyes of the locals. Yvonne King was not yet a teenager, but she remembers watching the airplanes come and go.

&#8220;Counting them going out and counting them coming in,&#8221; she said, a practice followed by many who wanted to know how many aircraft were lost on the mission.

Looking around at the veterans in the churchyard following the service, King, who carried the Union Jack in the ceremony, said, &#8220;It&#8217;s just nice seeing them again.&#8221;

In opening the service, Sir Roger du Boulay, who flew for the Royal Air Force in the war, noted this may be the final time many of the Americans visit.

He said the younger generations &#8212; the children and grandchildren of the veterans and their English friends &#8212; will perhaps continue the relationship.

Rufus Gatton, 85, of Mesa, Ariz., was making his first reunion visit. He did it, he said, so his son, Roger, could see the places he had talked about for so many years. Maybe, the father said, the son will return.