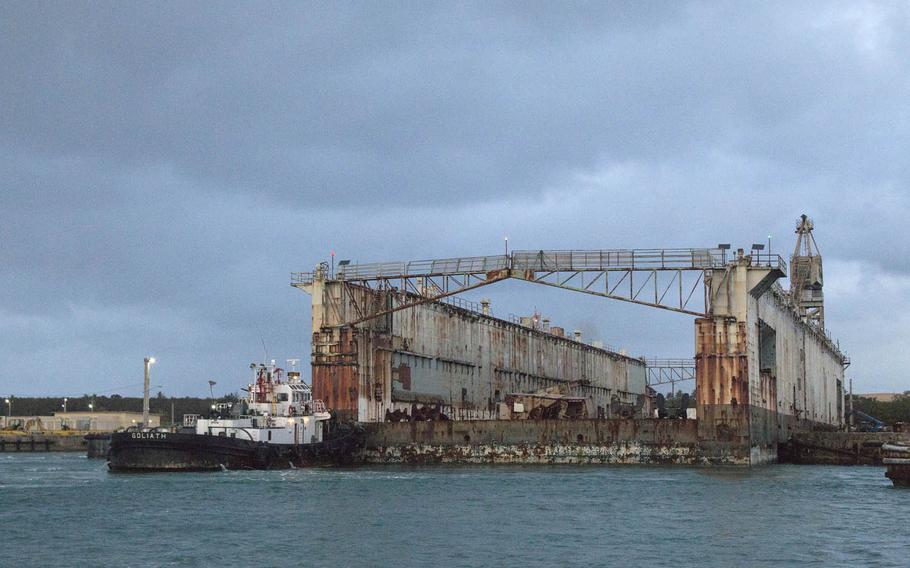 The drydock Richland was towed out of Apra Harbor, Guam, Jan. 28, 2016, with the help of several local tug boats and the large Philippine tug Rhocas. The open-sea tow to the Philippines will take several days. (Jeff Landis/U.S. Navy)

A massive and dilapidated floating drydock used in the Pacific since World War II is moving to the Philippines after spending nearly half a century at Naval Base Guam.

Several local tugboats and the 467-ton Philippine tug Rhocas guided Richland out of Apra Harbor Wednesday in preparation for an open-ocean tow to the Philippines that will take several days. The Rhocas began that tow on Thursday.

“I’ve been working on this drydock since I was 18 — in the 1970s and ‘80s,” Paul Yatar, a crane operator with Guam Shipyard, said in a Navy statement. “I worked on her while she was an active drydock, but it has reached its lifecycle, and it’s a good thing to see it go after all this time.”

It’s unclear what will happen to the drydock, which has a deep basin that can be flooded so ships can be floated in and repaired after the water is drained, once it arrives in the Philippines.

Richland — more than two football fields long, 124 feet wide and 57 feet high — was built in 1943 by Chicago Building & Iron Co., of Eureka, Calif., and put into commission the following year, the Navy said. It was first towed to Pearl Harbor, Hawaii, then to Eniwetok and Ulithi atolls before making its way to San Pedro Bay, Philippines, to be used with U.S. and Allied ships near the end of World War II.

It was reclassified as a medium auxiliary floating drydock in 1946 and renamed Richland in 1968 when it arrived at Apra Harbor while the Vietnam War was in high gear and Guam served as a major jumping-off point for ships and aircraft.

The piers at the base have undergone major renovations the past few years, improvements that have left no room for the antiquated drydock, Capt. Alfred “Andy” Anderson, the base’s commanding officer, said last fall.