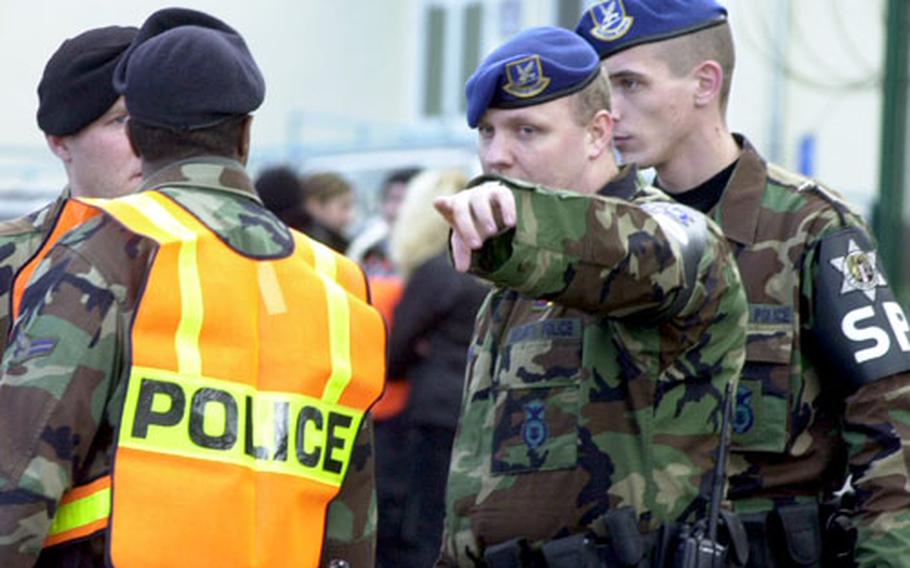 KAISERSLAUTERN, Germany &#8212; Hundreds of people at Pulaski Barracks and the Vogelweh military complex were evacuated Thursday after construction workers unearthed a 500-pound World War II-era bomb at a base park.

Military security personnel began evacuating people at Pulaski Barracks and the adjacent Vogelweh complex around noon, running from building to building to clear the area.

A German bomb squad is going to defuse the bomb and remove it on Saturday, said Erin Zagursky, an Air Force spokeswoman at Ramstein Air Base. That will give authorities time to put together a removal plan, she said. U.S. military and German officials are meeting Friday to discuss how they will remove it and where they will dispose of the bomb.

In the meantime, police locked the gate to the park and will patrol the area until the bomb is taken away, Zagursky said.

German and U.S. military fire departments and explosive ordnance disposal teams from the area, along with the 569th U.S. Security Forces Squadron and the 431st Civil Engineers, rushed to the scene shortly after workers discovered the bomb.

The park is a popular spot for command picnics, cookouts, concerts and outdoor flea markets when the weather is warmer. There were no events at the park when the workers found the bomb.

The barracks is home to U.S. Army Garrison Kaiserslautern headquarters and Kids&#8217; Zone, a popular play area geared toward children. Police also evacuated the nearby shoppette and commissary before later extending the evacuation zone all the way to Vogelweh&#8217;s exchange center and food court.

Everyone was allowed to return to their offices and to shop at the commissary and shoppette about 3&#189; hours later.

Craig Myers, 18, a senior at Kaiserslautern High School, which is located at Vogelweh, called the evacuation &#8220;chaotic&#8221; in the beginning. Security evacuated some areas only to let the people return minutes later.

Brian Rigsby, 36, whose wife is in the Air Force, had come to the Vogelweh bowling alley to see if he could match his 195 average but had to leave due to the evacuation. He&#8217;s glad security officials cleared the area.

Finding bombs from World War II in and around U.S. military bases in Germany is common.