A German soldier throws a smokegrenade to conceal the movement of his troops flanking the village during the re-enactment. (Matt Millham / S&S)

A German soldier throws a smokegrenade to conceal the movement of his troops flanking the village during the re-enactment. (Matt Millham / S&S) 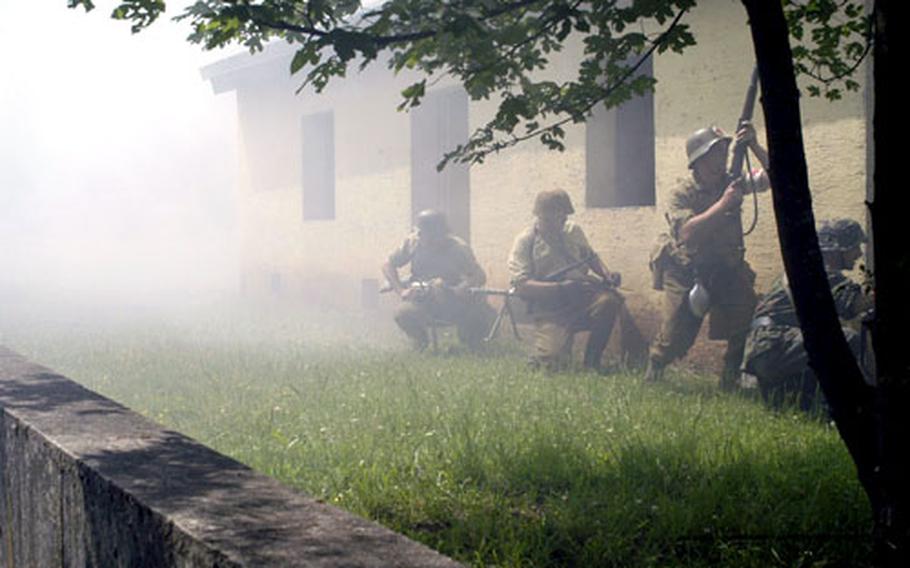 Behind a thin veil of smoke, a team of German troops waits to advance on Allied forces during a World War II re-enactment in Baumholder on Saturday. (Matt Millham / S&S) 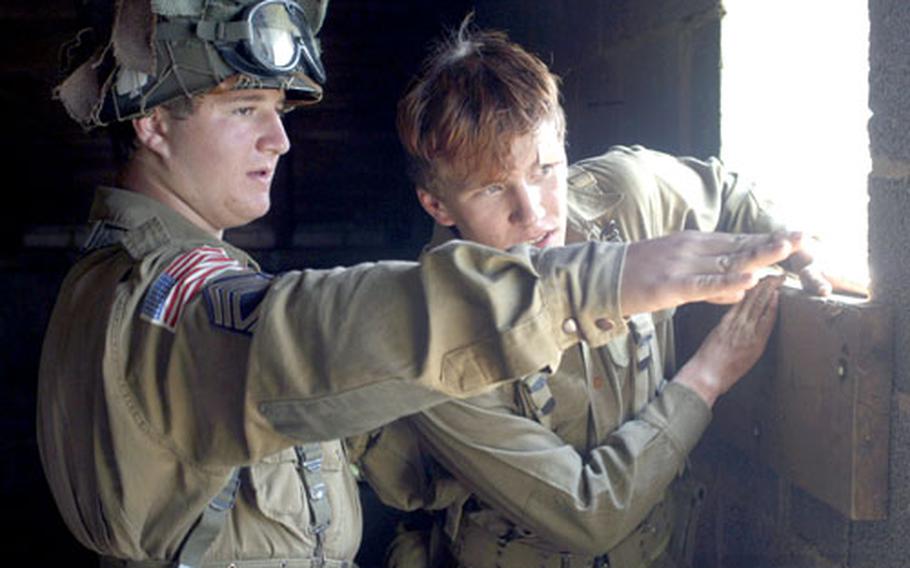 Ignacio Suarez, left, and Thomas Richardson Jr., both 15, look out over the battlefield at a World War II re-enactment in Baumholder, Germany, on Saturday. (Matt Millham / S&S)

BAUMHOLDER, Germany &#8212; Outnumbered almost three to one and with his squad pinned under a storm of artillery, there was no way Sgt. 1st Class Ignacio Suarez was going home alive.

Less than half an hour after the battle began, his position was overrun. The enemy didn&#8217;t take any prisoners.

Fortunately for him, the battle, like his rank, was just for show.

The simulation was part of a three-day exposition of World War II vehicles, memorabilia and culture at Baumholder&#8217;s H.D. Smith Barracks.

Staged at a mock town used to train U.S. troops for urban combat in Iraq and Afghanistan, the simulation brought World War II enthusiasts from France, Germany, the Netherlands, the Czech Republic and Hungary face to face in a pitched battle before dozens of spectators.

It was the biggest event of its kind in the participants&#8217; collective memory, and an unusual one for German soil. For the most part, Germany doesn&#8217;t allow World War II re-enactments involving guns or German uniforms, said Bill Medland, a British expatriate who lives in Germany and loves to play war. He often travels hundreds of miles, mostly to other countries, to engage in his hobby.

Medland, 50, served 20 years in the Royal Air Force, and drove more than 200 miles with his 13-year-old son Kai and two other members of the Duke of Cornwall Light Infantry to take part in the event, which began Friday. He&#8217;s been re-enacting World War II battles for 30 years, making him one of the first such hobbyists in Germany, he said. He estimates there are only about 100 dedicated re-enactors in the country.

Unfortunately, his unit was wiped out during the simulation as the well-drilled German mechanized infantry re-enactors of Germany-based PzAbt101 stormed the town and captured it from the Allies in less than 30 minutes of un-choreographed mayhem.

Also among the losers was Thierry Becker, a 37-year-old World War II enthusiast from Woustviller, France. He got the war bug from his barn at the age of 10. His family home, an old farmstead near France&#8217;s border with Germany, was used in 1944 as a headquarters by American troops sent to liberate France.

He later bought an American Jeep, built in 1942, and a GMC truck of the same vintage.

In 1984, an American veteran of the war visited Becker&#8217;s hometown. Becker was ecstatic, and has kept in contact with the man, a Tennessean, ever since.

Compared with Medland and Becker, Sgt. 1st Class Kevin DeVos is a rookie, at least in terms of how long he&#8217;s been re-enacting. DeVos spent more than 300 hours coordinating the three-day event to bring together a huge collection of vintage German and American vehicles and weapons, and to find a place for it all to happen. It was the third such event he&#8217;s organized since arriving in Germany a little more than three years ago.

DeVos, who jokes of his hobby as a sickness, got into re-enacting only after he&#8217;d spent more than a decade restoring old military vehicles &#8212; 27 vehicles to date. It was when he was in Iraq, an unlikely place to think about putting on a heavy, wool World-War-II-era uniform, that he decided to get involved in this aspect of military history.

He&#8217;s since tried to spread his love for military history through these events and by encouraging others to accompany him to other events around Europe.

The simulations and re-enactment are a great way to bring a sense of honor and purpose to troops, he said: &#8220;A soldier who knows his history fights better.&#8221;