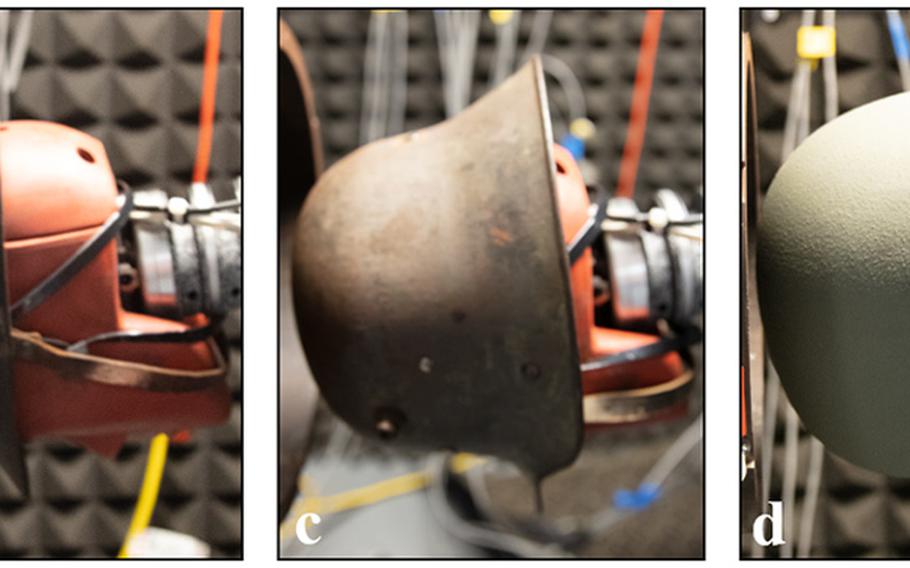 Tests by researchers at Duke University included (from left) the British Brodie helmet, French Adrian helmet, German Stahlhelm, U.S. Advanced Combat Helmet and no helmet. The tests showed that while all the helmets offered significant protection to the head against overhead blasts, the Adrian performed better than the other three. (Duke University)

Tests by researchers at Duke University included (from left) the British Brodie helmet, French Adrian helmet, German Stahlhelm, U.S. Advanced Combat Helmet and no helmet. The tests showed that while all the helmets offered significant protection to the head against overhead blasts, the Adrian performed better than the other three. (Duke University) 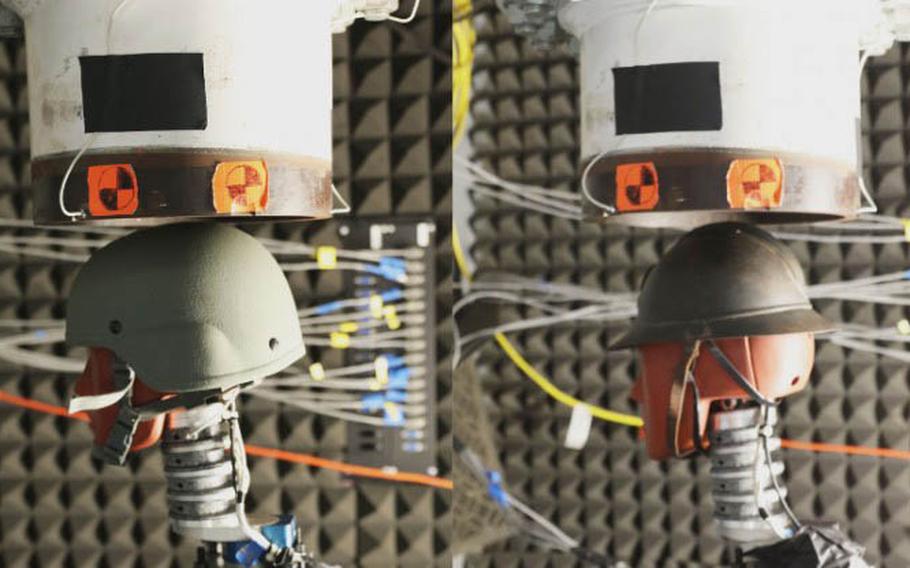 High-speed video records high-intensity blast tests on on a current U.S. Army helmet, left, and French Adrian helmet, the results of which were released in a recent Duke University study. The report found that the French World War I helmet outperformed the modern helmet in providing protection against head injury from overhead blasts. (Duke University)

A team of biomedical engineers compared the U.S. Advanced Combat Helmet, which is being phased out, to three designs from WWI — the French Adrian, the British Brodie and the German Stahlhelm helmets — in extensive testing designed to simulate the effects of overhead explosions.

Traumatic brain injuries can be caused by the pressure resulting from detonations from artillery shells, aerial bombs or other ordnance. The injuries often have long-term effects that are difficult to detect immediately.

The study, published earlier this month, said that while ballistic protection afforded by modern helmets is much better than in WWI, the ACH did not provide better protection against overhead blasts than any of its WWI predecessors.

Specifically, the French 1915 Adrian helmet produced a lower peak pressure at the crown of the head compared to the ACH, it said.

“While we found that all helmets provided a substantial amount of protection against blast, we were surprised to find that the 100-year-old helmets performed just as well as modern ones,” said Joost Op ‘t Eynde, principal author of the study.

“Despite the significant advancements in these other areas of protection, helmet protection of the head against shock waves has not changed all that much," he said in an email.

All of the helmets tested significantly reduced the risk of moderate brain bleeding, the study found.

The findings come in the wake of a Jan. 8 Iranian missile attack on Al Asad Air Base in Iraq, in which over 100 U.S. service members suffered traumatic brain injuries. The attack, in which at least a dozen missiles were fired at the base, was in retaliation against the killing of Maj. Gen. Qassem Soleimani, a top Iranian military commander, by a U.S. drone strike earlier in January.

The Adrian model, named after its designer and introduced in 1915, became the first helmet issued to troops in WWI, when head wounds from shrapnel and air bursts by artillery shells became a major cause of battlefield deaths. It was soon followed by the Brodie, which was also adopted by the U.S. Army as the M1917.

The Adrian was characterized by a crest along its dome. This provides an additional layer of protection that absorbs the shock to the wearer’s head, in contrast to helmets that don’t have that feature.

“The Adrian helmet resulted in lower crown pressures than all other cases,” the study found. “The ACH, Stahlhelm, and Brodie helmet were not found to be significantly different from each other,” the study found.

The Army’s ACH has been in use since the mid-2000s but is being steadily replaced by the Enhanced Combat Helmet.

Meanwhile, the Army’s new Integrated Head Protection System helmet has been fielded by units in Afghanistan and elsewhere with promises of better protection against blunt impact.