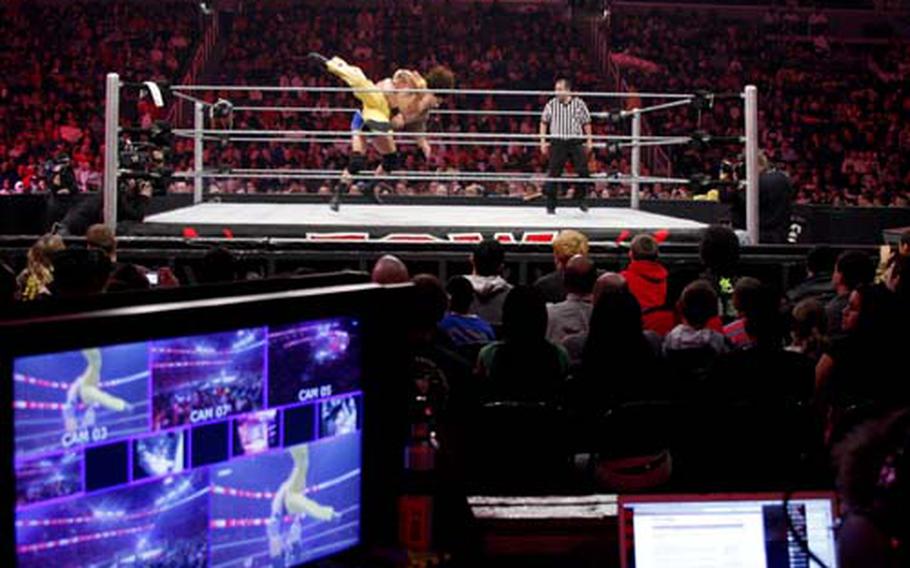 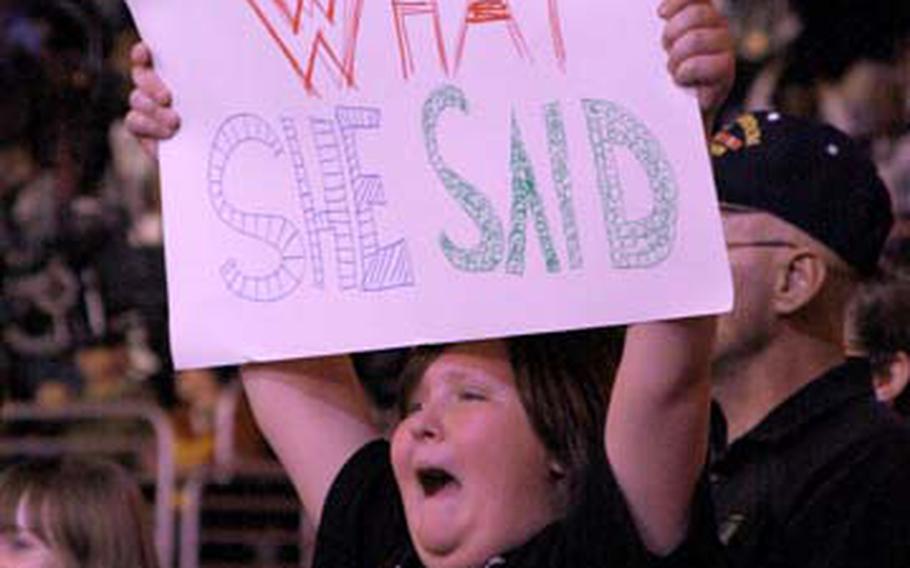 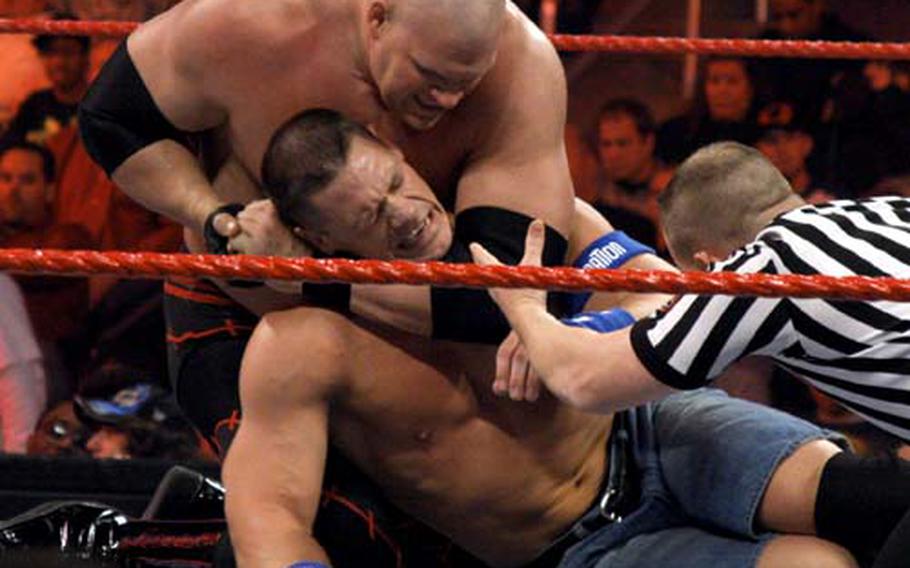 John Cena, center, tries to free himself from Kane&#39;s headlock. Cena has traveled to Iraq five times with the WWE Tribute to the Troops tour. (Robin Hoecker / Stripes) 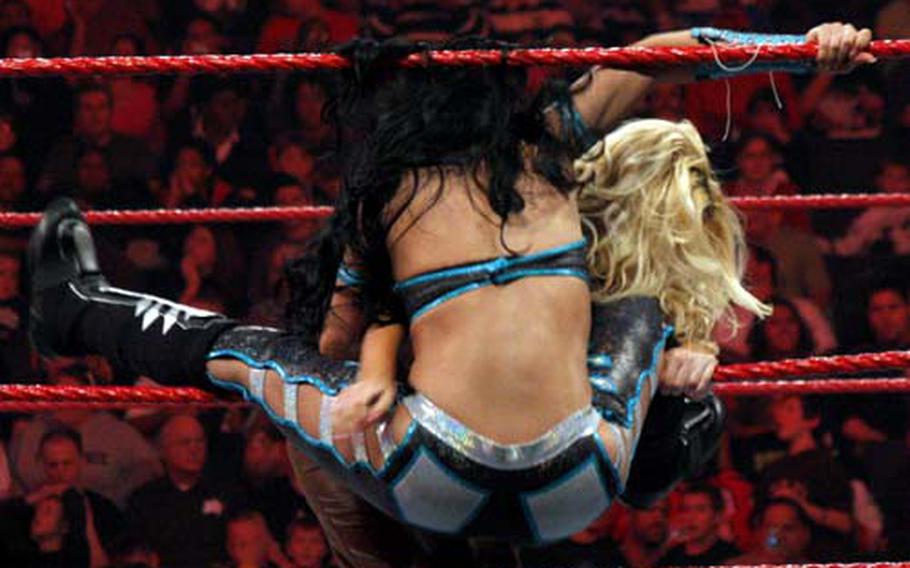 Jillian tries to push Melina out of the wring during a women&#39;s match. (Robin Hoecker / Stripes) 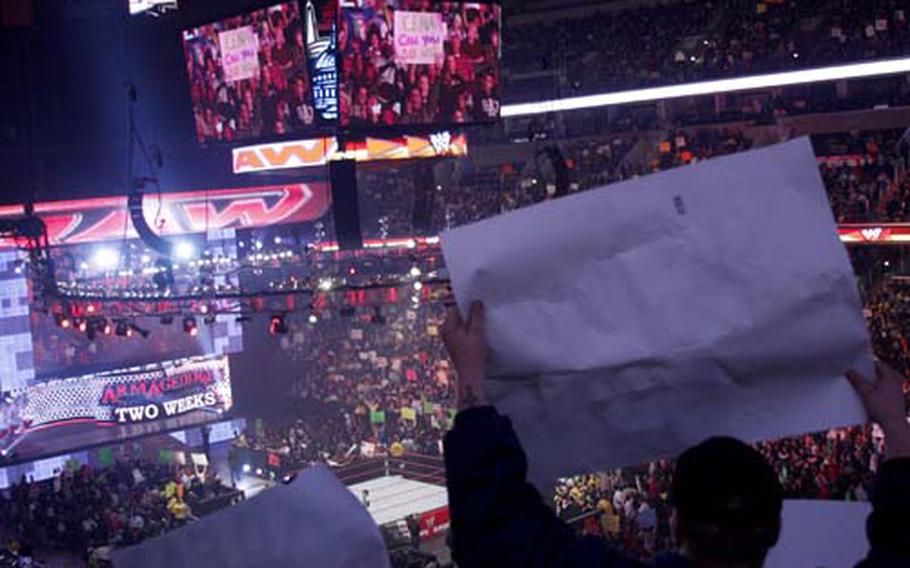 If he weren&#8217;t a pro wrestling champion and movie star, John Cena would be a Marine.

Or, at least, he would try.

Cena was in Iraq this week as part of World Wrestling Entertainment&#8217;s sixth annual Tribute to the Troops tour. He and other Superstars and Divas of the WWE visited and performed at bases throughout the region. A television broadcast of Friday&#8217;s show will air on NBC on Dec. 20.

"Our purpose is to make sure they&#8217;re happy for the holidays," Cena said Monday, a few hours before a C-17 carrying tons of equipment and about 55 wrestlers and support personnel headed downrange. "If for a second, we can take their minds off the daily grind, that&#8217;s why we&#8217;re there."

The WWE&#8217;s tradition of entertaining the U.S. military dates back to the first Gulf War, when wrestlers visited the troops. In the past five years, the WWE has organized more than 130 visits to troops at home and abroad.

"The look on their faces is just extraordinary," said WWE Chairman Vince McMahon. "It&#8217;s a slice of Americana coming to them, and it&#8217;s the least we can do."

Art Myers, director of Air Force Services and head of the Armed Forces Entertainment Office, is quick to point out that it&#8217;s no minor sacrifice for McMahon and his crew.

"He is forgoing putting this on in a big coliseum, so it is costing him a huge amount of money," Myers said. "But he does it every single year. He holds back no expenses. If we want a certain superstar, we just tell him who it is, and he goes."

Diva Mickie James was looking forward to her second visit to Iraq.

"I try to embrace each moment as big as I can, live in the moment as much as I can. But there is a lot going on ... we leave tonight (Monday) after the show, we&#8217;ll get there tomorrow night, go to sleep, wake up early in the morning and we&#8217;re out and about visiting bases, meeting soldiers all day Wednesday and Thursday. Then Friday we do the show, and right after the show we come back here."

But, she says, the troops are now "part of our universe. It&#8217;s kind of neat, to know how much they really, really appreciate [the visits]. You can see the light in their eyes and the smiles on their faces, and to me that&#8217;s worth more than gold sometimes. It makes you feel good."

"I spent five tours in Vietnam," said Myers, "and the majority of the bases were fairly good-sized. In Iraq they&#8217;re small camps. We visited one camp last year that only had 40 soldiers in it. We want to go to the sites that no one really goes to, because those are the ones that really need the entertainment. On this trip last year, we set a record and went to 22 sites. This year we&#8217;re going to 28 sites.

Myers also noted that storylines, heroes and villains mean little to the troops. "They sort of separate the swagger and everything from [McMahon] just being a good man. Even the wrestlers that are the bad guys. I mean, they all embrace all of them, and they refer to Vince as &#8216;the chairman.&#8217; "

"I sit with Vince on the plane over and talk to him, but all of a sudden, when I see him walk down the runway, he&#8217;s a different person. In fact, I was standing in the ring with (Army Chief of Staff) Gen. (George) Casey a couple of years ago, we had been talking to Vince [before], and when Vince came down the aisle, Gen. Casey had to look again!"

The WWE also offers military members free tickets to live events worldwide. All troops have to do is show up on the day of an event. If the show is not sold out, the ticket is free.

"We were very humbled by the kindness was extended to us," said Maj. Louis Dorfman, who received free tickets to Monday Night RAW in Washington through the Wounded Warrior program. Dorfman is recovering from physical and psychological traumas he suffered from a mortar attack in Baghdad on Nov. 22, 2007. He sat in the second row with his wife, Marie, and two sons, Robert and Casey.

"It&#8217;s a time that we could have some fun together and not think about doctors&#8217; appointments and how our lives have changed. I think it&#8217;s a great thing that the WWE is doing for troops all over the world, just for a moment, giving them a break from the stress and pressure of war."

VideoGet the Flash Player to see this player.//Click here to see a full photo gallery.