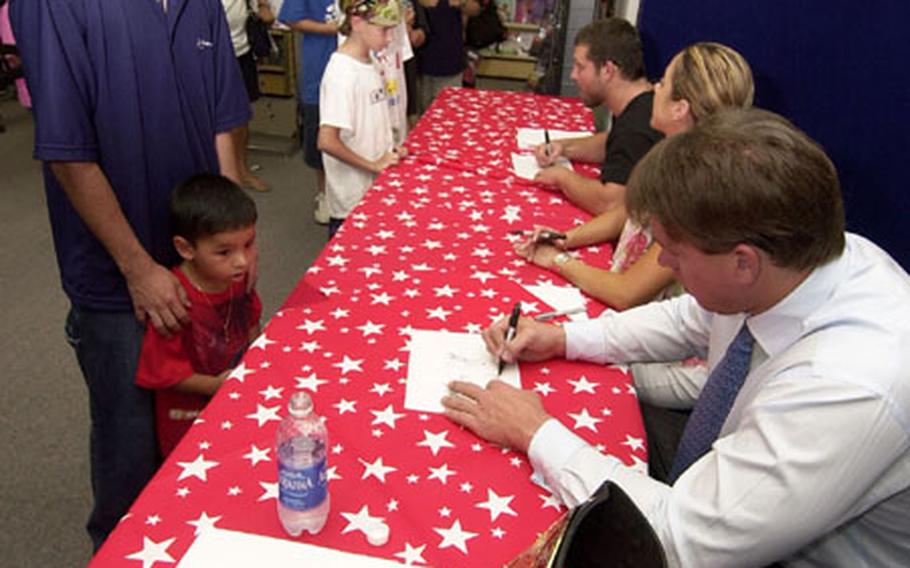 YOKOTA AIR BASE, Japan &#8212; Three stars from World Wrestling Entertainment&#8217;s Smackdown! barrelled their way into Yokota&#8217;s base exchange Saturday afternoon for a shortened visit with servicemembers and their families.

The WWE held a pair of shows at Tokyo&#8217;s Nippon Budokan on Friday and Saturday. The SmackDown! stars last visited Japan a year ago with sold-out events at the Yokohama Arena and Kobe World Hall.

But reaching Yokota turned out to be tougher than advertised. The wrestlers wanted to drive from Tokyo, Layfield said, but heavy traffic forced them onto the train. The entire trip took more than three hours.

Senior Airman Martin Capasse of 374th Maintenance Squadron said he&#8217;s been an avid WWE fan since the inaugural Wrestlemania in 1985. He and his wife, Brenda, heard about Saturday&#8217;s visit and decided to stop by.

Layfield said he&#8217;s been to the Middle East three times in the last 18 months. Smackdown! staged a card for U.S. troops in Baghdad last Christmas that was broadcast on the American Forces Network.

&#8220;These guys are heroes. They do a helluva job helping to keep us free. This is our way of supporting them and saying thanks.&#8221;