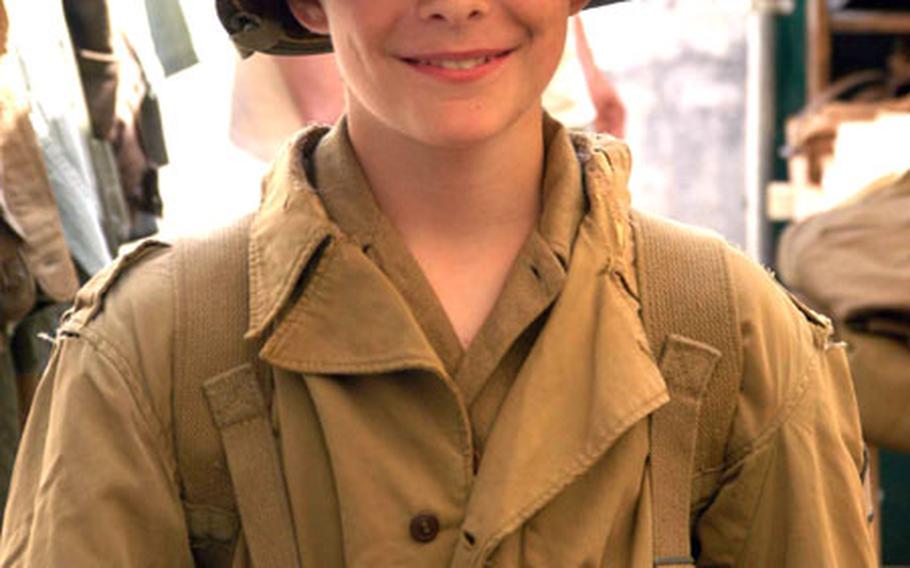 Enthusiasts of all ages get into the act at the 60th anniversary of D-Day at Normandy. Even kids dressed up in World War II-style uniforms to celebrate the occasion. (Michael Abrams / S&S)

Enthusiasts of all ages get into the act at the 60th anniversary of D-Day at Normandy. Even kids dressed up in World War II-style uniforms to celebrate the occasion. (Michael Abrams / S&S) 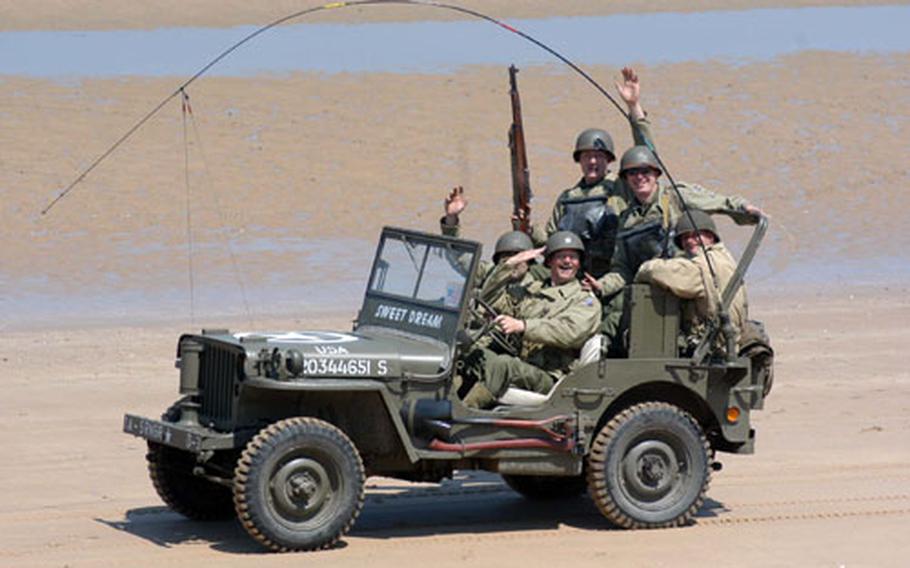 Military enthusiasts salute and wave to spectators as they drive along Omaha Beach in a World War II vintage jeep. Fans of World War II memorabilia gathered at Normandy this week for the 60th anniversary of D-Day. (Michael Abrams / S&S) 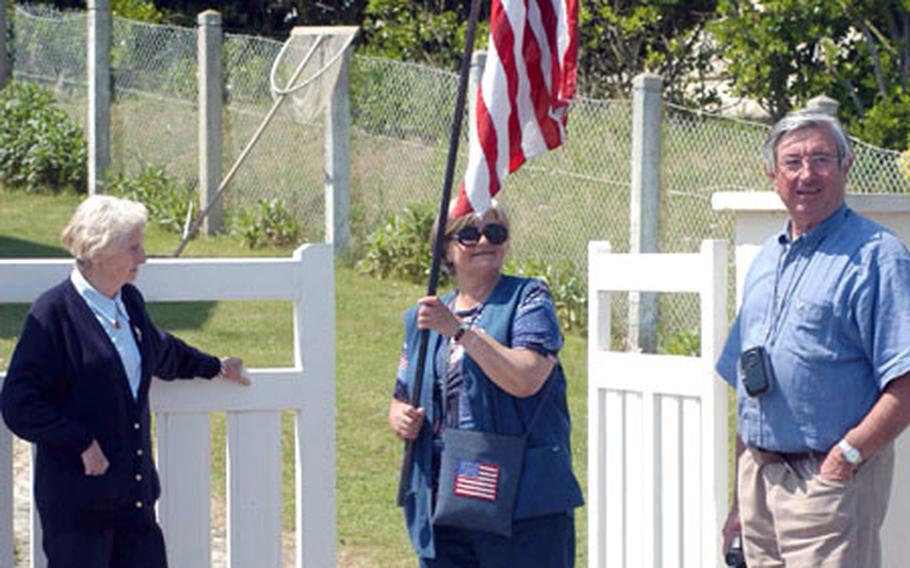 A resident waves an American flag as a convoy of vintage World War II vehicles passes her house on Omaha Beach in Vierville-sur-Mer, France, during celebrations for the 60th anniversary of D-Day. (Michael Abrams / S&S)

VIERVILLE-SUR-MER, France &#8212; A group of British World War II enthusiasts were heading back to their vintage U.S. Army vehicles parked on a French beach when the sight of H. Smith Shumway brought them to a stop.

For the next 20 minutes, the 1st Infantry Division veteran regaled them with tales and recollections of what it was like on D-Day. Shumway&#8217;s family proudly stood by, beaming with approval as they checked out the men&#8217;s WWII uniforms, which featured 1st ID insignias.

&#8220;We like to be a moving exhibit for what you guys were doing,&#8221; Stephen Whitehouse said to the Normandy veteran. Whitehouse, who is from Somerset, England, and his squad are among the thousands of WWII wannabes who have descended on Normandy to commemorate the 60th anniversary of D-Day. On this weekend, in this part of northern France, guys in World War II garb &#8212; from boots to helmets &#8212; are everywhere.

While there are some Americans, the majority of re-enactors are Europeans. Whitehouse said he even has met some from as far away as Australia.

The difference is that Thomas and the others, including his 19-year-old son, Andrew, have carried their fancy into adulthood. Much of what they wear or drive is authentic stuff, from the patches on their shoulders to the spare tires on the back of their jeeps.

However, some people wonder what the deal is, said Ted Fitzgerald, who is from Bristol, England, and part of Whitehouse&#8217;s group. Fitzgerald said the re-enactors sometimes get suspicious looks from people that seem to be saying: &#8220;Get a life.&#8221;

Shumway, who now lives in St. Louis, lost his sight in the war when an anti-tank mine exploded near him. So while the 82-year-old couldn&#8217;t see the men in their period uniforms and vehicles, he didn&#8217;t seem the least bit bothered by the imitators.

There are an estimated 6,500 WWII vehicles tooling around the Normandy countryside this weekend, according to Thomas, who came from Weymouth, England, for the festivities. Many of the &#8220;soldiers&#8221; and their families are camping out in designated fields.

Down the road from the cemetery, in the village of Vierville-sur-Mer, Carl-Henrik Pande-Rolfsen, a Norwegian, was kicking back after a long and eventful day of playing soldier.

The Norwegian and his cronies like to toss candy at the young French kids who line the road and wave to the &#8220;Americans.&#8221;

Asked if he&#8217;s crazy for coming all the way from Oslo to participate, Pande-Rolfsen cracked a smirk.

&#8220;A German!&#8221; Pande-Rolfsen said, raising his voice as he pointed to a young man driving down the road in a vintage sidecar.

Then, rather than turning their weapons on the driver, they shot him a smile and a wave.