As a chaplain gives an invocation, soldiers from the 1st Infantry Division&#39;s headquarters staff bow their heads in prayer at a brief welcome-home ceremony just after midnight Thursday in Würzburg, Germany. (Steve Liewer / S&S)

As a chaplain gives an invocation, soldiers from the 1st Infantry Division&#39;s headquarters staff bow their heads in prayer at a brief welcome-home ceremony just after midnight Thursday in Würzburg, Germany. (Steve Liewer / S&S) 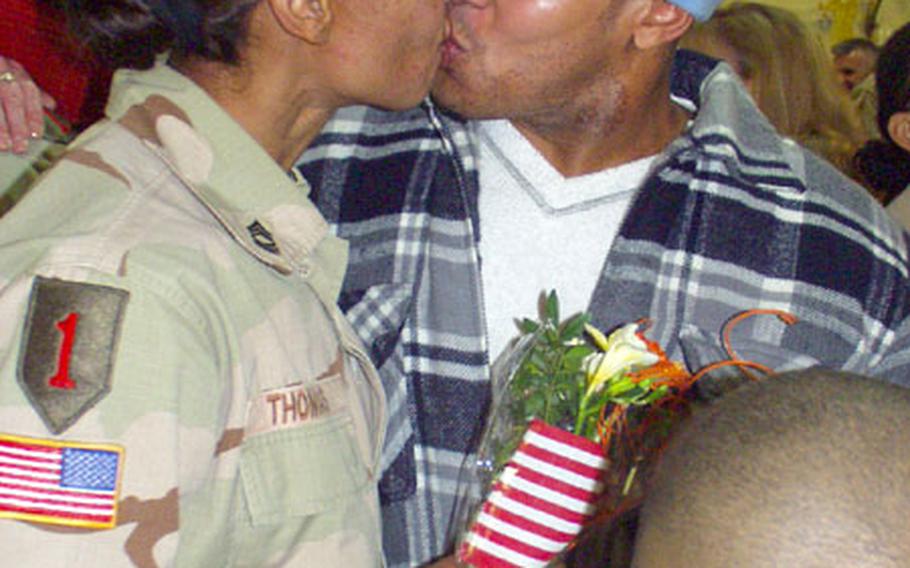 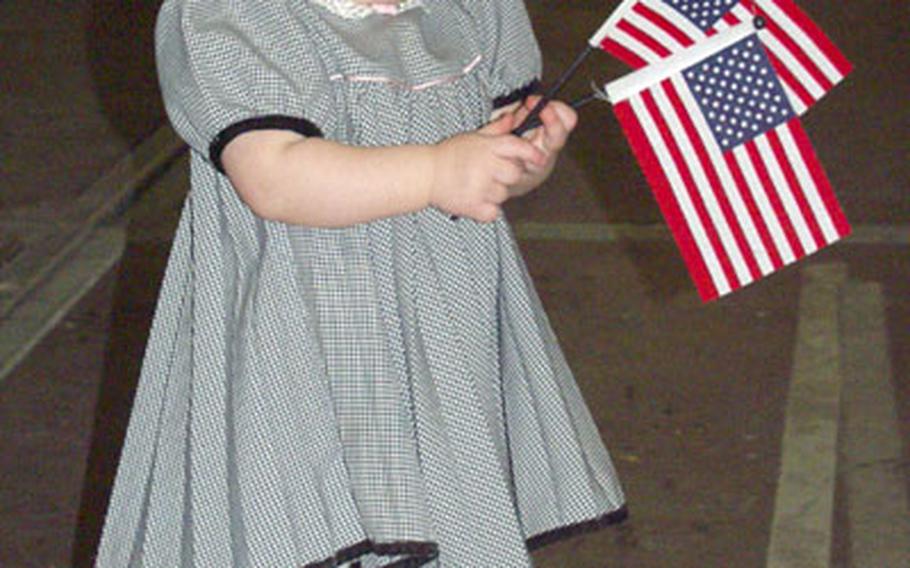 Dressed in her best clothes and waving the Stars and Stripes, Lauren Stanley, 14 months, awaits the return of her father, Master Sgt. Chris Stanley of the 1st Infantry Division&#39;s headquarters company, from Iraq. Lauren was only two months old when he left, said her mother, Karen Stanley. (Steve Liewer / S&S) Sharmilla Gonzalez and her son, Christian, wait in a reception tent on a snowy night at Würzburg&#39;s Leighton Barracks for a reunion with their husband and father, Spc. Camilo Gonzalez, a soldier in the 1st Infantry Division&#39;s headquarters company. (Steve Liewer / S&S) Too excited to wait, two little girls peer under a curtain in the 1st Infantry Division reception tent while their fathers — soldiers in the division&#39;s headquarters command — line up in formation to greet their families. (Steve Liewer / S&S)

Two days after turning control of its sector of Iraq over to the 42nd Infantry Division, Maj. Gen. John Batiste led 91 members of his 1st Infantry Division headquarters staff home to a midnight reunion with families in snowbound W&#252;rzburg late Wednesday night. Another 128 returned Thursday.

&#8220;Soldiers, well done,&#8221; Batiste said, during brief remarks to the soldiers and their families.

Fifty-three weeks earlier, the headquarters command had flown to Kuwait for a month of training in crowded holding camps before convoying north to Iraq. In mid-March, the Big Red One took control of a large, troubled sector of Iraq north and east of Baghdad from the 4th Infantry Division.

The headquarters staff lived mostly in the regal but shabby palaces of the former dictator Saddam Hussein in his hometown of Tikrit. The division fought and won significant battles in Baqouba, Najaf, and Samarra and joined the Marines in the second successful assault on Fallujah.

At the same time, division troops supervised the construction of hundreds of schools, medical clinics and other buildings while training tens of thousands of Iraqi soldiers and shepherding the country toward its first democratic elections last month. Still, though, attacks on U.S. and Iraqi troops increased throughout the year. More than 70 of the division&#8217;s Europe-based soldiers died and about 900 were wounded.

&#8220;You entered the heart of darkness to bring the light of hope and the flame of freedom to a people long terrorized and oppressed,&#8221; Lt. Col. Christopher Kolenda, rear detachment commander, told the troops.

The reunited families and soldiers were more than ready for the tour to end.

Kolenda said nearly one-half of the division &#8212; including most troops from Kitzingen, Schweinfurt, W&#252;rzburg and Katterbach &#8212; now is home. Over the next several weeks, the focus will shift to Vilseck as the 3rd Brigade Combat Team comes home to the base there.