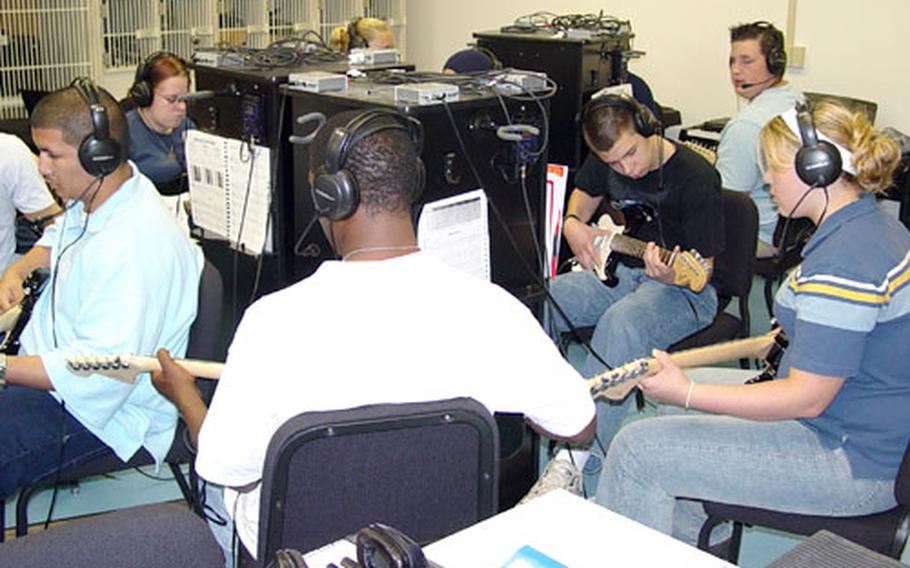 Students from Würzburg High School’s guitar lab practice on their instruments in November. Music teacher Jeff Pellaton started the lab, which allows students to advance in their lessons at their own pace. (Walt Seely / Courtesy of DODDS)

A new music program at W&#252;rzburg High School in Germany has struck a popular chord with would-be rock stars.

Students practice on their guitars, but the sound is fed through a cable into a headset each student wears, so it does not distract their peers. Pellaton has master control of the system and can listen in to any student&#8217;s progress or mute the music to speak to the students through their headsets, he said.

The school&#8217;s pianos also are linked into the system.

While the students can&#8217;t perform a school concert with the system, they do have the ability to record their playing, and to add musical styles such as blues or rock as accompaniment to their own playing.

The lab may be a bit too appealing to W&#252;rzburg High School students.

One of the lucky students who got in is 11th-grader Sarah Brandt.

Brandt, whose mother bought her a guitar to practice on at home, said she plans to take the level two guitar lab as well.

And although they don&#8217;t get to experience the jitters of performing for the whole school, the students do perform solos and duets in front of the other students in the class, Pellaton said.

He said the guitar lab has the students&#8217; creative juices flowing.