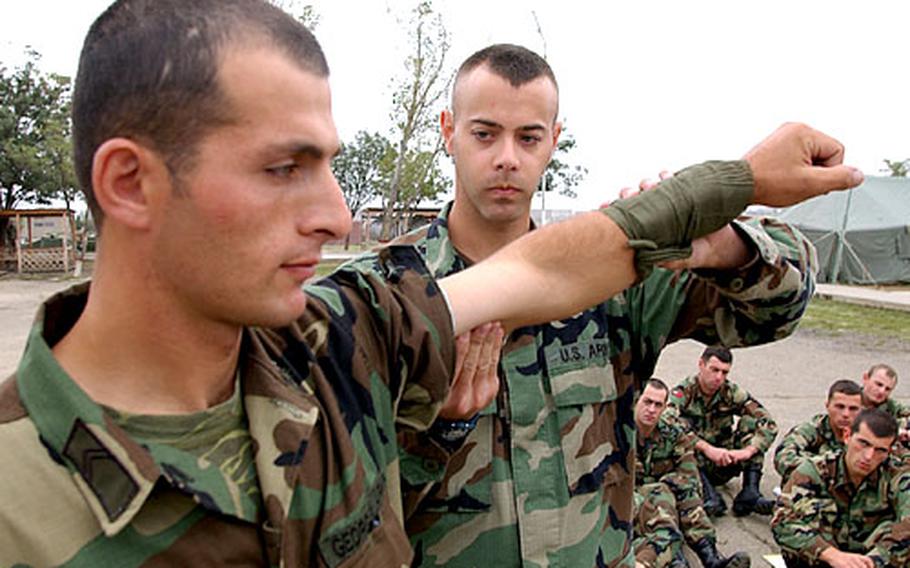 Army Spc. David Becker, a medic with the 67th Combat Surgical Hospital from Würzburg, Germany, shows Georgian soldiers how to apply a dressing to a wound. Becker is part of a medical unit training new Georgian soldiers in Georgia Train and Equip, a U.S. European Command operation. (David Josar / S&S)

Army Spc. David Becker, a medic with the 67th Combat Surgical Hospital from Würzburg, Germany, shows Georgian soldiers how to apply a dressing to a wound. Becker is part of a medical unit training new Georgian soldiers in Georgia Train and Equip, a U.S. European Command operation. (David Josar / S&S) 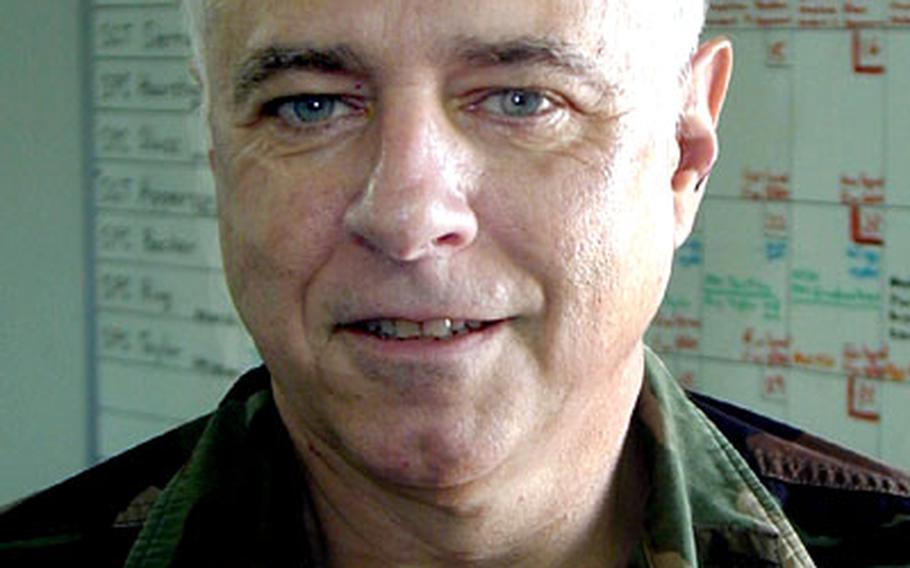 KRTSANISI, Georgia &#8212; For the 67th Combat Surgical Hospital team from W&#252;rzburg, Germany, the only bad news in Georgia had been a ruptured Achilles&#8217; heel by an airman playing basketball.

The rest of the news while being deployed for the Georgia Train and Equip Program is that the Georgians are extremely healthy.

In addition to providing medical care to the Georgian and U.S. troops, the hospital team is providing medical education to the battalion of young Georgian troops being trained. The Georgians will receive basic first aid classes, followed by combat lifesaver training. There also will be advance training for about 20 handpicked men to fill a medical platoon.

One of Becker&#8217;s favorite examples occurred when he was talking about pressure points and applying a tourniquet to stop bleeding.

The soldiers asked why they couldn&#8217;t just tie off the artery, Becker said, and he explained that the procedure was technically too complicated, especially in the field.

The hospital unit is here to support the Marines who are doing the fourth round of training for GTEP, a U.S. European Command program that is educating successive battalions of young Georgia soldiers.

The program started last fall, but the soldiers from the hospital team have been here about a month and will rotate out in December.

In addition to the military training &#8212; which includes classes in such things as first aid and small arms fire &#8212; Georgia is also receiving equipment, which has included uniforms, small arms such as Kalashnikov rifles, and medical supplies such as bandages, suture kits and rubber gloves.

The most common medical problems for U.S. and Georgian troops during the training has been diarrhea and some upper respiratory infections. Wigle said those are common for any deployment.

Wigle said the role of the hospital team &#8220;is pretty unique.&#8221; That is because it is only educating foreign troops, but also being the first-aid provider to foreign troops.

The troops handpicked to be trained for the medical platoon have tended to be some of the smartest soldiers being trained in the battalion, Wigle said, and most have some sort of medical background.

Overall the health condition of the Georgian soldiers has been &#8220;very good,&#8221; said Staff Sgt. Brian McCoy, a licensed practical nurse with the unit, although when they taught the troops how to open closed airways, they discovered some teeth in need of repair.