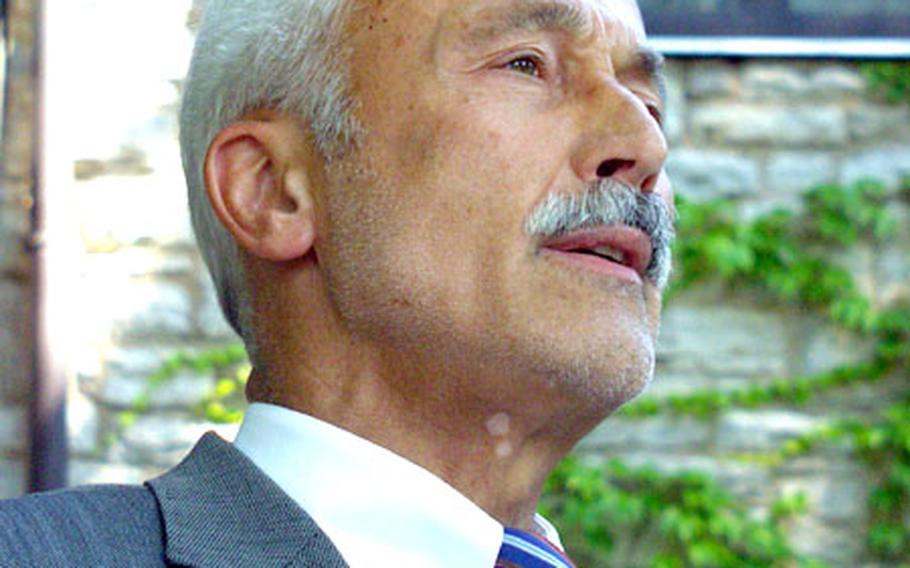 Bernd Moser, lord mayor of Kitzingen, Germany, said he was not surprised to learn that several U.S. Army bases in his northern Bavarian city would be closing, but he was stunned to learn they would be vacated in slightly more than a year. (Steve Liewer / S&S)

W&#252;RZBURG, Germany &#8212; The news that the Army would soon close a handful of bases in northern Bavaria had been long expected, but that hardly cushioned the blow to German civic leaders when it finally came last week.

The U.S. Army Europe announced Friday that troops will leave five major bases and six smaller facilities in 2006, with the sites to be turned over to the German government by Sept. 30, 2007.

Many of the soldiers are from the W&#252;rzburg-based 1st Infantry Division, which is moving its headquarters and troops to Fort Riley, Kan., as part of the Army&#8217;s massive restructuring of forces from divisions into brigade-size &#8220;units of action.&#8221;

The base closures will affect 6,100 soldiers, 2,000 German and American workers, and 11,000 family members in the three communities. Some units will deactivate, others will move to the United States, and still others will move elsewhere in Europe.

The U.S. Army Garrison Franconia, based in W&#252;rzburg, will lose one-fourth to one-third of its 45,000 soldiers and family members. The 1st ID units in Kitzingen and W&#252;rzburg mostly will leave through inactivation or transfer, while most troops in Giebelstadt will transfer to other nearby bases.

Moser said the departure of about 7,000 American soldiers and family members from Kitzingen &#8212; which has a total population of 22,000 &#8212; is a huge blow. But it is a blow the city has been planning for since last summer, when President Bush announced 1st ID soldiers would leave Germany.

Moser said Kitzingen has hired a consultant to study future uses for Harvey, Larson and Marshall Heights, and their recommendations are expected before the bases are turned over.

Harvey Barracks includes an airstrip the Army has rarely used since the 1980s. The post is adjacent to business and industrial parks, which suggest future uses for the land. Larson features barracks, a newly renovated gymnasium, a chapel, a movie theater, motor pools and an 18-hole golf course. Marshall Heights is heavily built up with apartments, two schools, a convenience store and bowling alley.

Ole Kruse, a spokesman for the city of W&#252;rzburg, expressed relief that Leighton Barracks and the nearby Army hospital will stay open indefinitely.

Although Leighton&#8217;s highest profile tenant, the 1st ID headquarters staff, will be leaving next year with 800 to 1,000 soldiers, the 69th Air Defense Artillery Regiment will move its 150-troop headquarters battery from Giebelstadt in late 2006, said 1st Lt. Eugene Hunt, the unit&#8217;s spokesman.

And the Franconia Garrison will consolidate about 1,400 military and civilian workers now at Faulenberg and Harvey on Leighton. According to Army policy, relocated units cannot move again for at least three years. Presumably, then, Leighton will remain open until at least 2009.