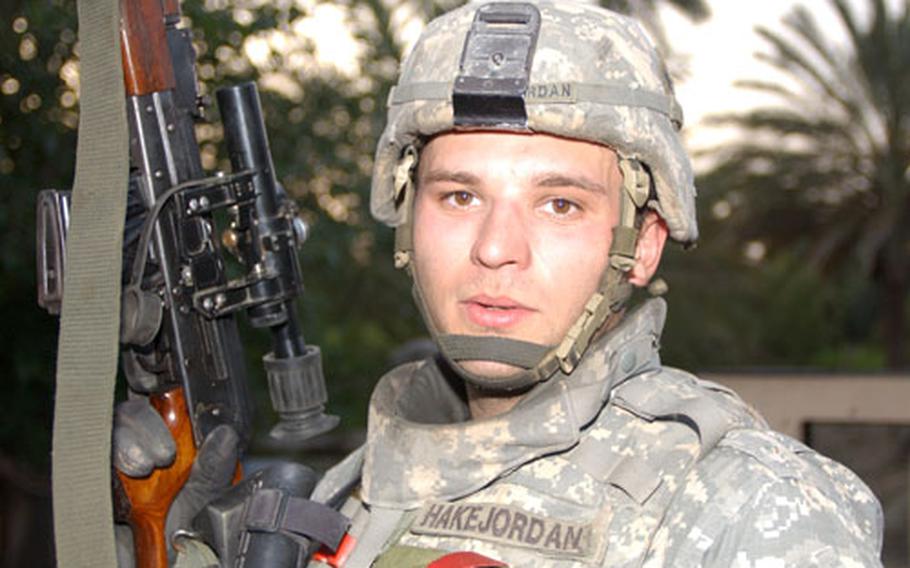 On a routine patrol, U.S. troops with 1st Battalion, 68th Armor came upon a house in the midst of dense greenery and at the end of a dusty country road.

Staff Sgt. Matthew Nicodemus, 33, said he immediately noticed that no Iraqi men were around.

Suddenly, a cell phone inside the home rang, said Nicodemus, of Altoona, Pa.

The troops then fanned out into the palm groves and found several weapons including several rocket-propelled grenades and hand grenades, two AK-47s and a new sniper&#8217;s rifle, Nicodemus said.

They also found a hand-written map of a U.S. military base, diagrams on how to build rockets and a CD-ROM with several thousand files written in Arabic, said Sgt. 1st Class Michael Greer, 35, of San Luis Obispo, Calif.

If that weren&#8217;t enough, the insurgent kept calling the interpreter back to ask what the Americans were doing.

The interpreter kept the act going.

The U.S. troops knew the insurgents were coming back and decided to lie in wait for them.

Many troops said they were psyched by the prospect of killing the person on the other end of the phone.

Shortly after U.S. troops set up, the insurgents called the interpreter and said they would be by in about 10 minutes to attack the Americans, said Staff Sgt. Art Hoffman, 30.

When seven insurgents got to the house, they ran into a wall of U.S. fire, said Hoffman, of Baltimore.

&#8220;The first guy that came in the door just dropped like a rock. The other two guys behind him got hit pretty hard, too. The rest grabbed their wounded and just ran back off,&#8221; said Hoffman.

One insurgent was confirmed killed in the fighting and the other two were in bad shape, he said.

&#8220;The initiative demonstrated at the platoon level is exactly how you win this fight,&#8221; said Fisher, of Sioux Falls, S.D.