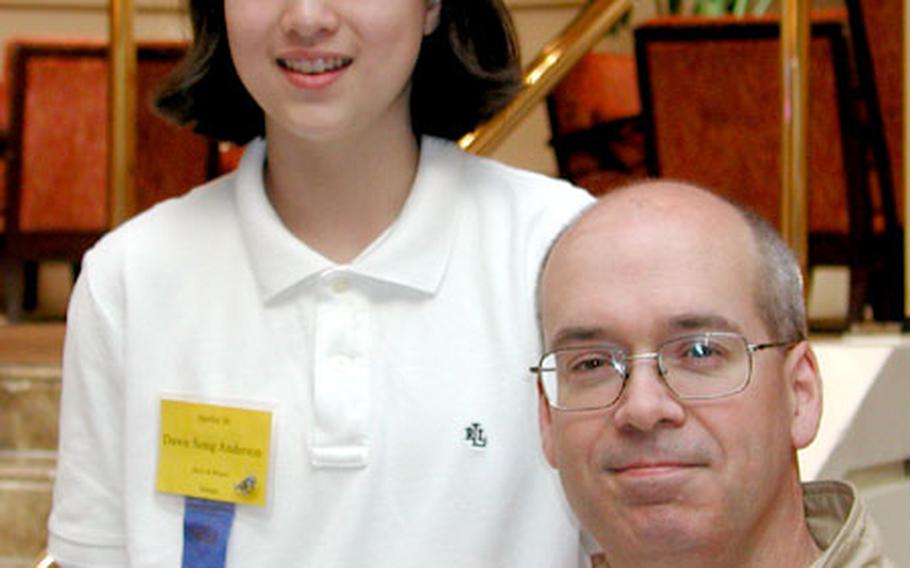 National Spelling Bee contestant Dawn Anderson awaits word on her progress with her father, Air Force Maj. Christopher Anderson, after the first verbal round, in which Dawn properly spelled “Sikhism.” Dawn had spelled 12 of 25 correct on her written test, and came up one point shy of being advanced to the next round. Dawn is a sixth-grader at Patch Elementary School in Stuttgart, Germany. (Patrick J. Dickson / S&S)

Dawn Anderson, the Department of Defense Dependents Schools entrant, was eliminated from the National Spelling Bee in the first round.

The 11-year-old sixth-grader at Patch Elementary School in Stuttgart, Germany, returned to Washington, D.C., this week to participate in the 77th annual Scripps-Howard National Spelling Bee, her second.

Dawn was bounced in the first round last year on &#8220;emmeleia,&#8221; a Greek word for a fitting of dance to the content in a play.

This time she got her &#8220;oral round&#8221; word correct: Sikhism, the religion or practices of the Sikhs, found in India and elsewhere.

&#8220;I was really happy because I knew that word, but I asked the definition just to make sure&#8221; it was the same word, and not a sound-alike, she said.

Dawn traveled to Washington with her dad, Air Force Maj. Christopher Anderson, a logistics officer at European Command headquarters in Stuttgart, her mom, Kil Sun, a homemaker, and her brother Eric, 10, and sister, Becky, 8.

She worried her score of 12 out of 25 on the written test might not be enough, but Dawn had to wait until after the first oral round to find out.

Only 94 kids survived that round. Anderson was one point shy of advancing.

She planned on blowing off steam by heading to the hotel swimming pool with one of her friends. The champion was to be determined on Thursday.

The family flies back to Germany on Saturday.

Maj. Anderson laughed when asked whether his daughter would be participating next year at their new assignment location, Kirtland Air Force Base in New Mexico.

Where even dictionaries fear to tread

Want to know just how from-another-planet-smart these kids are?

From my comfortable seat in the audience, I thought I&#39;d take the challenge and spell right along with them. I figured I would miss some they got, get some they missed, and come out with a respectable six or seven out of 10. I wrote in my notepad as the official reader quizzed them:

Ouverry. Wrong. It&#39;s houvari. Not even close. Hey, this one&#39;s not even in my dictionary, and the only place I see it online is ... on Web sites for spelling contests!

Anaptixious. But of course, it&#39;s anaptyxis. I&#39;m like, the William Hung of spelling.

Chatacoly. A classical dance drama of Kerala, South India, it&#39;s one of the oldest art forms in the world. But it&#39;s kathakali. How could I have been so stupid?

Phermier. Kid got it right. I got it wrong. It&#39;s fermiere. Did he just laugh at me?

Corigendum. Sounded simple, but it was corrigendum. I swear these kids are pointing at me and laughing.