Writer went from messenger to the Marines 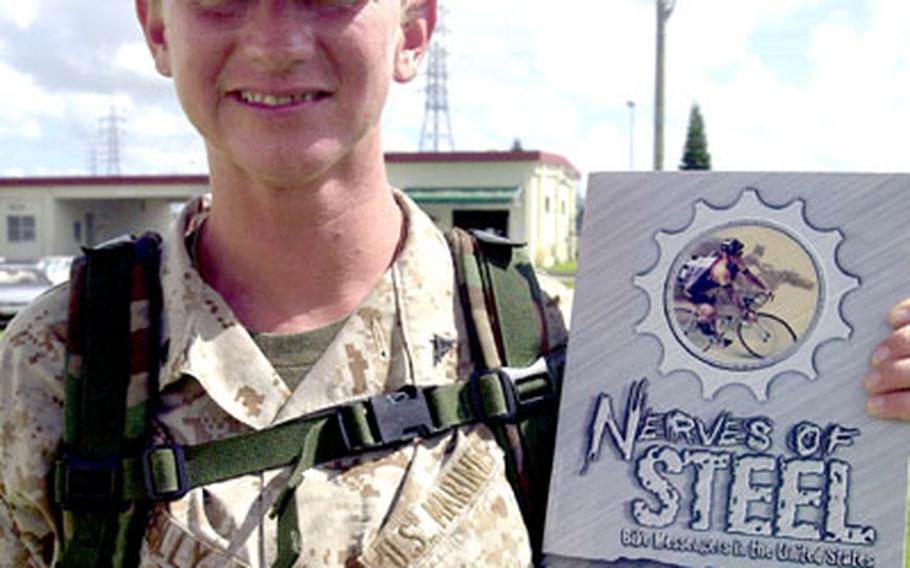 Lance Cpl. Rebecca Reilly spents 10 years working as a bike messenger and wrote a book about the business before joining the U.S. Marine Corps at the age of 34. (Fred Zimmerman / S&S)

She has seen the world as a bike messenger, writing a book about the business along the way, before becoming a Marine at age 34.

Her journey started in 1993 after she graduated from Lake Erie College with a degree in equestrian studies. She said she could&#8217;ve gotten a job working with horses but the pay wasn&#8217;t enough to cover her bills. And a job as a bank teller in Washington, D.C., taught her that working indoors wasn&#8217;t for her.

So when a bike messenger who often came into the bank told her she should try being a courier, she listened. That advice started a journey that lasted 10 years and took her across the United States for work and around the globe for competitions.

She began her courier career in the nation&#8217;s capital, where she soon realized bike messengers had their own subculture. After a year and half in the business and after hearing many messengers&#8217; stories, she decided to write a book about the business. &#8220;Nerves of Steel: Bike Messengers in the United States&#8221; was published in August 2000.

Over the next 10 years, Reilly traveled throughout the country, taking messenger jobs in major cities such as San Francisco, Chicago, New York and Boston. She was somewhat of a pioneer at that time; bike messengers typically stayed in one city. Her purposes were two-fold, she said: gathering material for her book while completing her goal of traveling throughout the States.

Whatever city she worked in, Reilly said, bike messengers always were treated poorly, &#8220;like a criminal &#8230; always regarded with suspicion.&#8221; Unlike workers from other delivery services, she said, couriers often are made to go through back entrances to buildings and often must check their bags when entering buildings. Messengers are even prohibited from using the restrooms in many buildings, she said.

Even more difficult for messengers than building managers, Reilly said, was the traffic.

Reilly said that was another reason she wrote the book: She wanted the public to understand what it&#8217;s like to be a bike messenger. Sometimes, for instance, drivers try to scare riders on purpose, she said, and couriers must defend their lives every day.

Why take the risks?

And while the everyday job was dangerous, there was time for fun. She competed in the Cycle Messenger World Championships from 1994 to 2000, traveling overseas three of those years to Barcelona, Spain; Zurich, Switzerland; and Copenhagen, Denmark.

After eight years of traveling and collecting information, Reilly began writing her book, which took one year to complete. The book was self-published and put her in debt, she said, so it was time to return to the road.

She went back to Washington, where, along with making deliveries and trying to publicize her book, she also was elected president of the local courier association.

She said her life was going full speed when it came to a screeching halt on Sept. 11, 2001.

After the terrorist attacks, the bike courier service stopped cold for a week, and became worse when letters filled with anthrax surfaced in the Washington area.

Sisters in the Navy and Air Force recommended she sign up. She opted for the Marines.

Drill instructors were extremely tough on her because of her age, she recalled; she was 34 when she went to boot camp. But after years of riding, Reilly said, she was physically ready for the challenge.

Reilly, a Marine now for almost 18 months, has big plans for her future. She hopes to one day become an officer and would like to become a linguist, she said. She&#8217;s now studying 10 different languages and plans to specialize in Chinese.