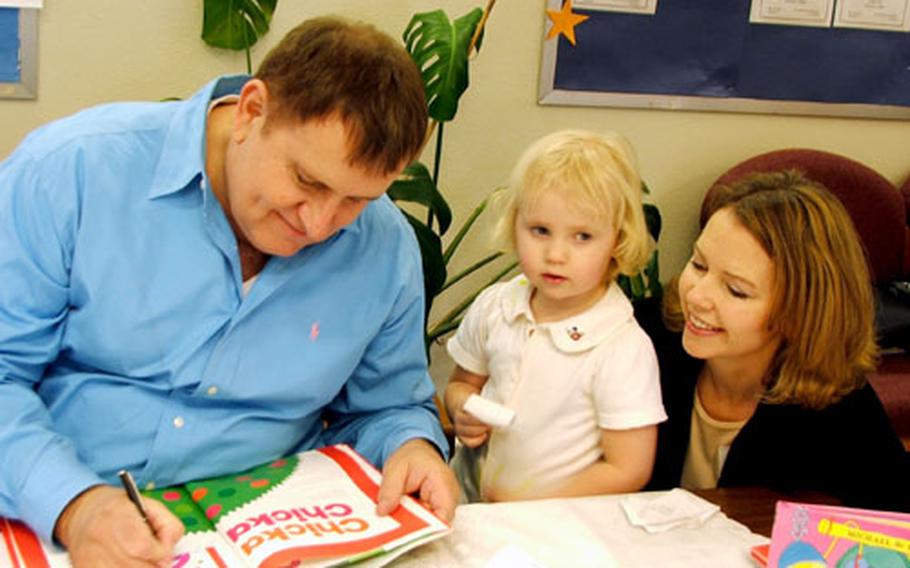 Michael Sampson signs a copy of “Chicka, Chicka 1 ... 2 ... 3” for Rebeka Wuerch, 3, and her mom, Miryam. The book is one of the best-sellers Sampson wrote with his late writing partner, Bill Martin Jr. (Courtesy of DODDS)

BAUMHOLDER, Germany &#8212; For aspiring writers, a conversation with Michael Sampson provides an insider&#8217;s guide to the publishing business. And it is, Sampson emphasizes, a business.

For each hardback book he sells, he gets 5 percent of the cover price, or about 40 cents, and 20 cents for softcover, he said.

During a presentation and book signing Friday at Neubrucke Elementary School on his way to other DODDS schools in Germany and Belgium, Sampson broke down the business, making clear it doesn&#8217;t produce overnight-success sorts of careers. Sampson wrote his first children&#8217;s book, &#8220;The Ball That Won ...,&#8221; in 1980. But he didn&#8217;t get it published until 1996.

Yet, he never gave up on becoming a children&#8217;s author, and his timing was better for his second shot. In the years since he&#8217;d written &#8220;The Ball,&#8221; there had been a generational change among the editors of children&#8217;s books, Sampson said in an interview.

When he went back in 1996, those editors had given way to a new generation of 30-somethings who were far more receptive to new concepts, he said. Even then, there were issues where artistry had to give way to legal reality.

Sampson&#8217;s original title was, &#8220;The Ball That Won the Super Bowl,&#8221; inspired by the 1979 Pittsburgh Steelers/Dallas Cowboys Super Bowl. But the National Football League weighed in, making the publisher delete &#8220;Super Bowl&#8221; from the title, as well as team logos on the helmets in the illustrations.

Now a successful author and consultant, Sampson still says competition is brutal in the fiction-writing sector. Of the 50,000 or so submissions that big publishers such as Simon and Schuster Inc. get each year, only about 100 get published, he said.

Knowing your audience is crucial, he said. Sampson, who calls himself a liberal, knew that &#8220;Pledge of Allegiance&#8221; would sell better to conservative families, and that&#8217;s how it was marketed.

Whatever the topic, he said, children are more receptive to stories told in rhyme &#8212; that rhyme and the rhythm of the words, as well as great illustrations, are crucial to success.

Samson told his Neubrucke audiences he might do 40 or 50 revisions on a story.