Writer brings message about bullying to schools in Italy 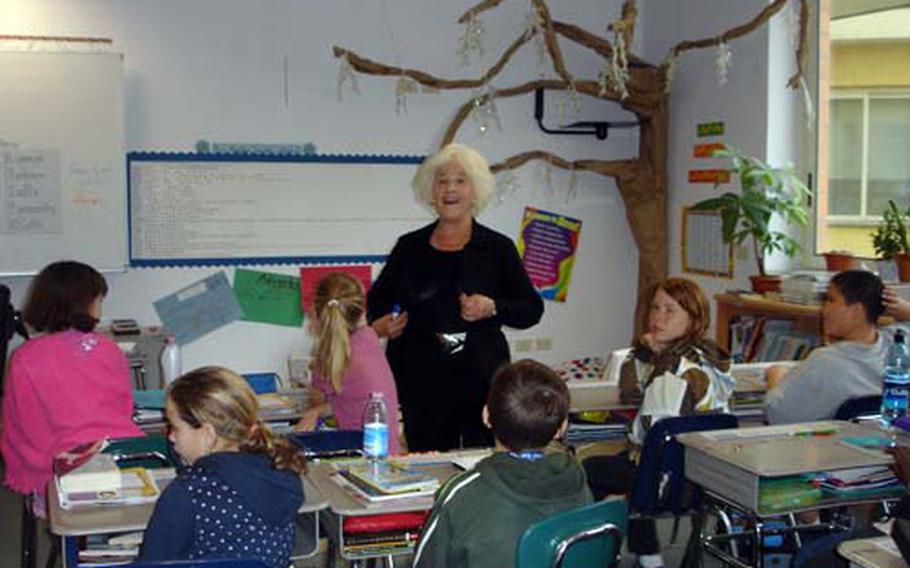 NAPLES, Italy &#8212; Equating bullying with genocide may be a bridge too far for some, but for author, scholar, educator and former Franciscan nun Barbara Coloroso, it is merely "a short walk."

Coloroso arrived in Italy last week to speak with teachers, students and parents in Naples and will speak at Department of Defense Dependents Schools in Aviano this week. Her presentations are aimed at understanding the root causes of bullying and how to prevent it.

Her latest book, "Extraordinary Evil: A Brief History of Genocide," may seem a departure from earlier works, including "kids are worth it" and "The Bully, the Bullied and the Bystander." But during discussions, she makes clear that there is a link between destructive behavior played out in the schoolyard and the behaviors leading to the genocides that took place in Rwanda, Germany, Turkey and other areas.

"It&#8217;s the most extreme form of bullying ... a far too common form of behavior that is learned in childhood and rooted in contempt for another human being &#8230;" Coloroso writes in "Extraordinary Evil."

During Tuesday night&#8217;s session with parents and teachers at Naples Elementary School, Coloroso offered some insight into her views on societal influences that contribute to bullying.

Using a diagram called the Bully Circle, Coloroso identifies the roles that others play when an individual or group is targeted. The diagram includes active and passive supporters and witnesses and onlookers, as well as those who stand up to the bullies &#8212; the resisters, defenders and witnesses.

Her lessons gave others the chance to reflect on and understand their own behavior. For some students, Coloroso&#8217;s words hit close to home.

"I felt like she was talking right to me," said 11-year-old Carrington Quezada, a fifth-grader. "I was bullied when I got my braces, so I started bullying. She helped me see that there are other choices."

School administrators said the value of Coloroso&#8217;s teaching is in the tools kids walk away with after listening to her, especially in dealing with conflict.

"I think the students are coming away with skills to use. She&#8217;s taught them how to walk away with dignity," said Mona Morgan, the elementary school principal. "After she spoke with the sixth-graders, I had a parent say &#8216;What a wonderful way to get them ready for middle school.&#8217; "

One of the simple lessons Coloroso stressed was the importance of vocabulary.

"Teasing is not taunting, telling is not tattling, and conflict is not bullying," she told a group of students Thursday morning.

The importance of words cannot be understated. Last year, "Extraordinary Evil" was pulled from a Canadian high school reading list as part of a class on genocide after protests from Turkish officials and residents. They objected to use of the word "genocide" in describing the 1915 killings of nearly 2 million Armenians in Turkey.

Earlier this month, Turkey&#8217;s foreign minister said U.S.-Turkish relations would be set back if President Barack Obama acknowledged the episode as a genocide, according to a New York Times report.

Coloroso said she would have included the Department of Defense schools in Turkey in her tour but she would be barred from entering the country.

"I knew I had committed a crime against Turkishness based on what had happened in Canada, and I was informed at that point that I would not be able to get a visa," said Coloroso who has spoken at DODDS schools for more than 30 years.

Coloroso will travel to Rwanda this year when filming begins on a documentary based on "Extraordinary Evil." She is also working on a follow-up book, "The Power of Good."

"Who were those witnesses, resisters and defenders who were willing to stand up and speak out? Who were they and what in their disposition and situation helped them make those decisions?" Coloroso asks. "I don&#8217;t know the answers yet."